The former Haitian president returns home after a 7-year exile, and is greeted by an ecstatic public 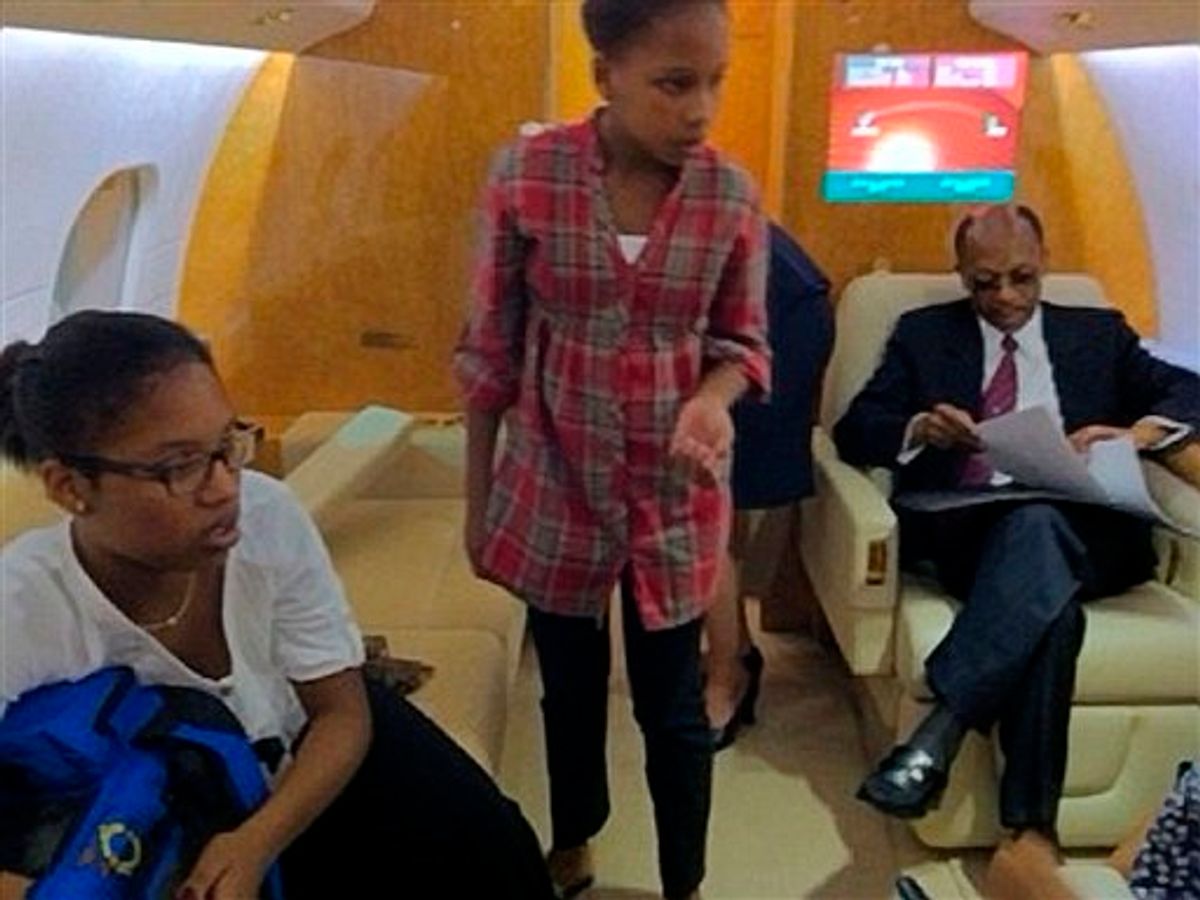 In this photo released by the Democracy Now! TV and radio show on Thursday March 17, 2011, the former President of Haiti, Jean Bertrand Aristide, right, sits inside on an airplane with daughters Michaela, 12, left, and Christine, 14, moments before takeoff in Johannesburg, South Africa, Thursday March 17, 2011. Aristide, who was forced to flee Haiti due to a rebellion in 2004 aboard a U.S. plane, will return after seven years of exile in South Africa, days before Haiti's presidential runoff election Sunday. (AP Photo/Amy Goodman/DemocracyNow.org) (AP)
--

Former Haitian President Jean-Bertrand Aristide returned home from seven years in exile to a celebrity welcome Friday, and immediately took a swipe at the decision to bar his political party from the country's presidential election.

Aristide, addressing reporters and a Haitian public that clustered around TVs and radios throughout the country, said the decision not to allow his Lavalas Family party disenfranchised the majority in a sharply divided nation.

"Excluding Lavalas, you cut the branches that link the people," he said in remarks that were otherwise largely devoted to thanking supporters who stayed loyal to him during his exile and helped engineer his return over the objections of the U.S. government. "The solution is inclusion of all Haitians as human beings."

Haiti's electoral council barred Lavalas from the elections for technical reasons that its supporters say were bogus. Many of its members are boycotting Sunday's runoff election. Still, several people affiliated in the past with the now-less prominent party ran in the first round of the election.

Twice elected president and twice deposed, Aristide is a popular but also polarizing figure. The former priest is an advocate of the poor, who make up the vast majority of Haiti's more than 9 million people, and he was a leader of the movement that shook off a hated dictatorship.

But he has many critics, who say he led a corrupt government, orchestrated violent attacks on foes and was as hungry for power as the leaders he denounced. He was last ousted in a violent 2004 rebellion that swept the country.

On Friday, Aristide was mobbed by close allies and journalists outside his private plane before being hustled into an airport VIP lounge as several thousand supporters rallied in the streets outside the terminal.

In the street outside the airport, where people listened to his remarks on car radio, there was jubilation.

"This man is our father, without him we haven't lived," said 31-year-old Sainvil Petit-Frere, one of about 3,000 cheering and chanting supporters in a quickly growing crowd. "This is the doctor who will heal the country."

Aristide compared his return to the Haitian revolution that ended slavery in 1804 in what was then a French colony. "Today, may the Haitian people mark the end of exile and coups d'etat," he said with his wife, Mildred, and daughters by his side.

Despite his supporters' insistence that Aristide will not get involved in politics, the U.S. and others fear his presence will bring further disarray to a country struggling to emerge from a political crisis, a cholera epidemic and the devastation of the January 2010 earthquake. It's not clear how he might affect Sunday's runoff between two candidates who in the past have opposed Aristide.

"We're going to stay wherever he is until he tells us what to do," said Tony Forest, 44, a minibus driver. "We will vote for the candidate he picks."

Aristide's aides have said he feared that if he waited, the winner of Sunday's vote might block his return. But both candidates, former first lady Mirlande Manigat and popular singer Michel "Sweet Micky" Martelly, are now stressing their support for his right to return as a Haitian citizen under the constitution. Both candidates would like to attract votes from Lavalas party followers.

During a refueling stopover early Friday in Dakar, Senegal, Aristide reiterated that he wants to work in education. His comments also reflected his awareness of his huge popularity and influence among Haiti's majority poor.

"I think that the Haitian people are very happy," Aristide told Democracy Now!, a U.S.-based news program. "Happy to know that we are on our way heading to Haiti. Happy to know that finally their dream will be fulfilled by things on the ground because they fought hard for democracy. They always wanted the return to happen and now it is happening."

Energy spread through Aristide's followers Thursday as word spread across Haiti that he was heading home. Some joined in a raucous, horn-blaring victory procession. Others decorated the courtyard of his foundation headquarters with Haitian flags and photos of the former president. One woman waited with a bouquet of flowers.

Aristide, a former slum priest who became Haiti's first democratically elected president, did not fully serve either of his terms. He was ousted the first time in a coup, then restored to power in a U.S. military intervention in 1994. After completing that term in 1996, he was elected again in 2001, only to flee a rebellion in 2004 aboard a U.S. plane. Aristide claimed he was kidnapped. U.S. officials denied that.

In exile, he has been reclusive, doing university research and polishing his academic credentials with a doctorate awarded by the University of South Africa for a comparative study of Zulu and Haitian Creole.

In front of Haiti's crumbled National Palace, a man who is supporting Martelly in the runoff election told Associated Press Television News that he had mixed feelings about Aristide's arrival.

"Yes, I support Aristide. I love Aristide," said the man who gave only his first name, Carlos. "But I don't want him to come back right now because it can be trouble for the election."

The initial Nov. 28 vote was so troubled by fraud, disorganization, instances of violence and voter intimidation that 12 of the 19 candidates, including the front-runners, initially called for it to be tossed out.