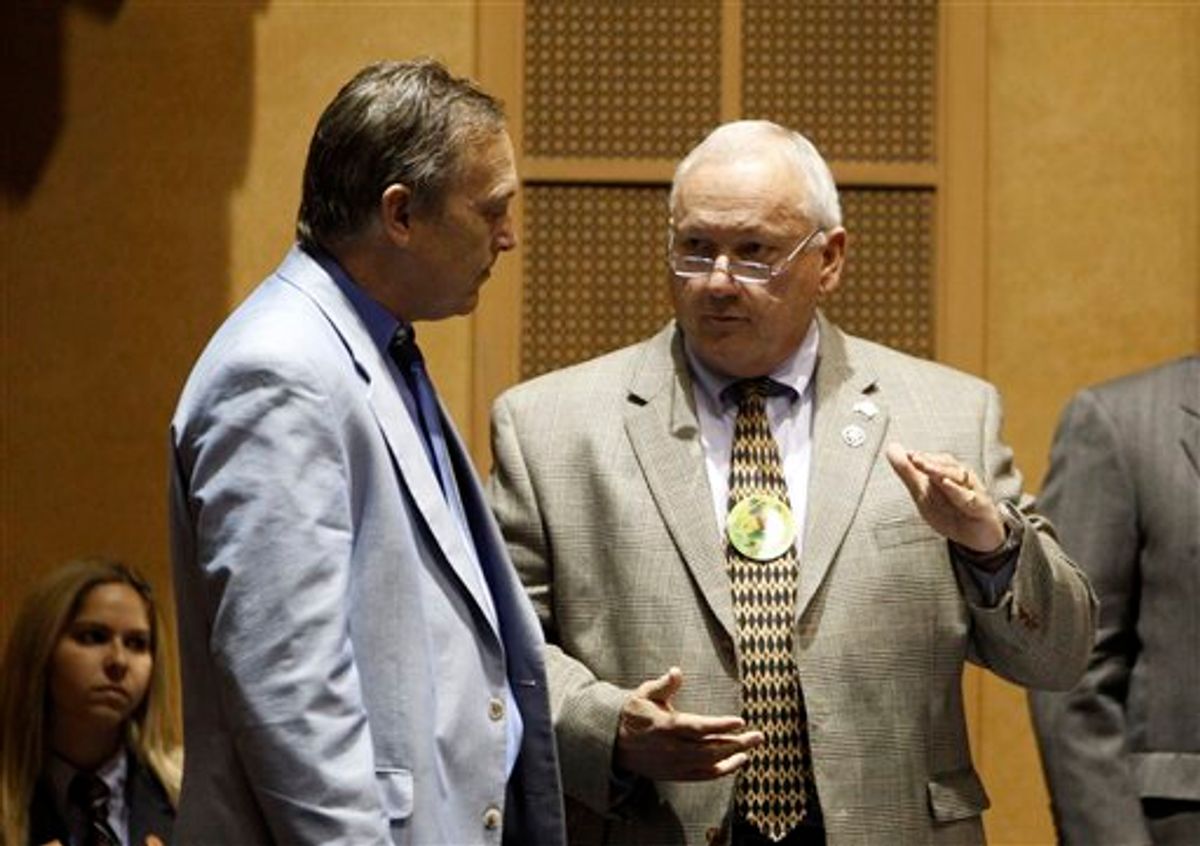 Arizona legislators took a timeout from illegal immigration with the Senate easily defeating five related bills, reflecting little appetite for an issue that made the state the focus of national debate and protest last year.

Majority Republicans were split Thursday in their votes on the defeated bills, which included two measures intended to force a U.S. Supreme Court ruling against automatic citizenship for U.S.-born children of illegal immigrants. The other three dealt with health care, public services and everyday activities such as driving.

Supporters of the measures voiced frustration and said there could be political fallout for lawmakers who voted against them.

"The lack of political courage" is the only impediment to step up pressure on illegal immigration, said Republican Sen. Russell Pearce, the sponsor of the 2010 law.

But business leaders have been urging lawmakers to put the issue aside to avoid damaging the still-ailing economy.

The 2010 law known as SB1070 resulted in protests, boycotts and legal challenges. A federal judge has put key provisions on hold.

"It's time for us to take a timeout," said Republican Sen. John McComish of Phoenix. "It's something that the people don't want us to be focusing on."

The two bills on citizenship were defeated on votes of 12-18 and 11-19 as majority Republicans split on the issue. The chamber's nine Democrats voted against all of the bills.

"I'm hopeful that now we can move on and focus on the business of the state," Democratic Minority Leader David Schapira of Tempe said after the three-hour floor session.

One of the rejected bills would have required hospitals to contact federal immigration officials or local law enforcement if people being treated lack insurance and can't demonstrate legal status.

Critics said that would burden hospitals, but Republican Sen. Steve Smith of Maricopa said his bill didn't require much.

"Maybe you forgot it's illegal to be in this country illegally," he said during the vote on his bill. "We just ask them to report the crime, not be the judge and executioner."

Also defeated was a bill to require schools to file reports on enrollments of illegal immigrant students.

The fifth bill was a sweeping measure sponsored by Pearce. It would have made it a crime for illegal immigrants to drive in Arizona. It also had provisions on registering vehicles, workplace hiring and various public benefits.

Pearce's bill also would have required eviction of public housing tenants who let illegal immigrants live with them and make applicants for vehicle titles and registration prove they are in the country legally.

Pearce and other supporters said cracking down on illegal immigration would provide relief to taxpayers by cutting costs for education, health care and other services.

Earlier Thursday, Gov. Jan Brewer said she didn't have positions on the bills and she declined to wave off legislators from taking up the issue of illegal immigration again.

"I believe that illegal immigration is an important subject to the populace in Arizona and is something that probably needs to be further addressed," said Brewer, a Republican who signed SB1070 into law.

Dozens of CEOs of major employers and business groups signed a letter distributed Wednesday by the Greater Phoenix Chamber of Commerce, saying that passage of additional legislation on illegal immigration would damage the economy and tourism.

Arizona should instead push for federal action on immigration and border issues, according to the letter signed by heads of construction companies, hospitals, real estate developers and US Airways.

"Arizona's lawmakers and citizens are right to be concerned about illegal immigration," the letter said. "But we must acknowledge that when Arizona goes it alone on this issue, unintended consequences inevitably occur."