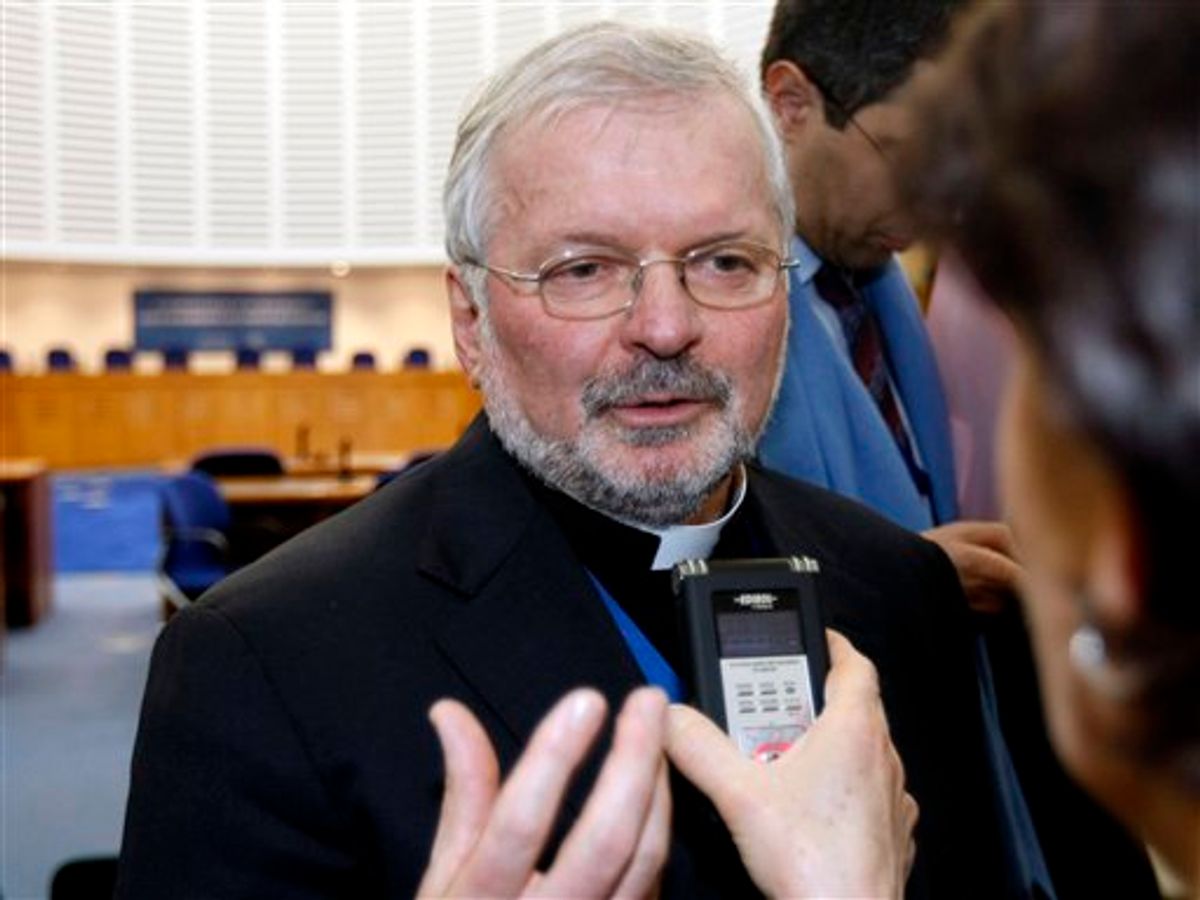 Bishop Aldo Giodano, permanent observer for the Vatican at the Council of Europe, answers questions of journalists at the European Court of Human Rights in Strasbourg, eastern France, Friday March 18, 2011. The European Court of Human Rights has ruled that crucifixes are acceptable in public school classrooms. The ruling will be binding on all 47 countries that are members of the Council of Europe, the continent's human rights watchdog. (AP Photo/Christian Lutz) (AP)
--

Crucifixes in public school classrooms do not violate a student's freedom of conscience, a European high court ruled Friday in a verdict welcomed by the Vatican in its campaign to remind the continent of its Christian roots.

The case was brought by a Finnish-born woman living in Italy who objected to the crucifixes in her children's classrooms, arguing they violated the secular principles public schools are supposed to uphold. The debate divided Europe's traditional Catholic and Orthodox countries and their more secular neighbors that observe a strict separation between church and state.

Friday's reversal has implications in 47 countries, opening the way for Europeans who want religious symbols in classrooms to petition their governments to allow them.

It was not immediately clear how the ruling would affect France, a traditionally Catholic country with a strictly secular state that does not allow crucifixes or other religious symbols in public schools, including the Muslim headscarf.

The court's Grand Chamber said Italy has done nothing wrong and it found no evidence the display of such a symbol on classroom walls "might have an influence on pupils."

The Vatican, which had unsuccessfully sought include mention of Christianity's role in Europe in a European constitution, hailed what it called a "historic" decision.

It said the court recognized that crucifixes weren't a form of indoctrination but rather "an expression of the cultural and religious identity of traditionally Christian countries."

Spokesman the Rev. Federico Lombardi said the court also recognized that each country should be granted "a margin of judgment concerning the value of religious symbols in its own cultural history and national identity, including where the symbols are displayed."

The ruling overturned a decision the court had reached in November 2009 in which it said the crucifix could be disturbing to non-Christian or atheist pupils.

The case was brought by Soile Lautsi, a Finnish-born mother who said she was shocked by the sight of crucifixes above the blackboard in her children's public school in northern Italy.

Massimo Albertin, Lautsi's husband, said Friday the family was disappointed and "disillusioned" by the ruling, saying it showed that the court didn't respect the principles on which Italian society is built.

"Freedom of religion, freedom from discrimination, freedom of choice are fundamental principles and in this case they weren't respected," Albertin said by phone from Abano Terme near Padua, where the family lives.

A self-described atheist, Albertin said he didn't think the family had any further recourse, saying the ruling showed "the Vatican is too strong for individuals."

The court said "Ms. Lautsi had retained in full her right as a parent to enlighten and advise her children and to guide them on a path in line with her own philosophical convictions."

The children, who were 11 and 13 at the time the case began, are now 20 and 22 and in university. The father said while Lautsi's name was on the court documentation, it was very much a joint initiative.

New York University legal scholar Joseph Weiler, who argued the appeal, said during the hearing last year that the case for secularism taken to the extreme could endanger Britain's national anthem "God Save the Queen."

Crucifixes are on display in many public buildings in Italy, where the Vatican is located. In Poland they are displayed in public schools as well as the hall of parliament.

These countries were joined by Russia, Ukraine and Bulgaria, which, like Poland, lived through religious persecution under communism.

"The message of the court is that in Christian tradition societies, Christianity has a special legitimacy that can justify a different treatment," said Gregor Puppink, director of the pro-Christian European Center for Law and Justice.

The ruling came as Vatican officials announced the Holy See is reaching out to atheists with a series of encounters and debates aimed at fostering intellectual dialogue and introducing nonbelievers to God. The first one begins next week in Paris.

Associated Press writers Angela Charlton in Paris and Nicole Winfield in Rome contributed to this report.