The government sues some bankers. Finally!

The FDIC charges three Washington Mutual execs with gross negligence. Please tell us this is only the beginning 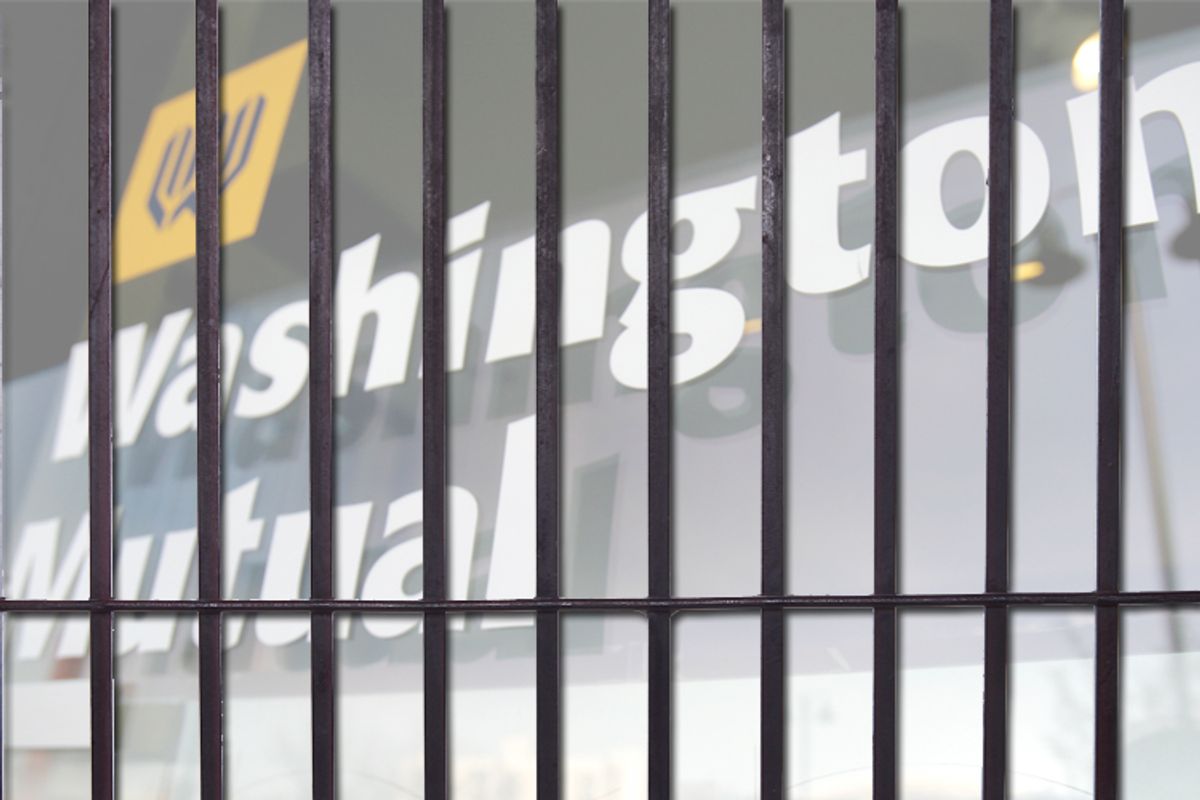 As a former customer of Washington Mutual (though not willingly -- my much smaller bank was swallowed up by WaMu during their great 1990s expansion drive) I have followed the twists and turns of the saga of the financial crisis' poster-boy for reckless lending with great interest over the years. Way back in August 2006, I was jolted to learn that WaMu had been booking negative amortization -- roughly speaking, the amount of money owed that its mortgage borrowers were falling behind on paying -- as earnings. I called it "Enron Economics" then and I think that subsequent events have borne me out.

So now, in what is being billed as the biggest legal action taken by a regulator against executives of a financial institution involved in the great crash, the FDIC is suing WaMu's three top corporate officers for, among other things "gross negligence, breach of fiduciary duty, and fraudulent conveyance." The gist of the case: CEO Kerry Killinger and his two right-hand men knew that they were taking big risks by putting people in homes they couldn't afford. They were warned countless times of the danger they were exposing the bank to. But they went ahead and did it anyway, continuing their reckless gambling even as the housing boom collapsed around them.

The complaint makes for interesting reading, even if the broader narrative has been clear for some time. But one juicy little passage resonates with particular harshness.

Checkers checking checkers. So much scorn! So much condescension! So utterly self-destructive! On the basis of that quote alone, I say: Lock 'em up and throw away the keys.

Because let's break it down. In a financial institution, the "checkers" are the people who check your credit -- who decide whether or not you are a good risk. Since one of the primary functions of a bank is to make loans I think that we can all agree that credit checking is a fundamentally crucial bank responsibility.

The risk managers stand a bit higher in the bank hierarchy; their job is to calculate whether the sum total of all the loans being made puts the bank at risk. Remember, we're talking about banks. Federally insured depository institutions that we entrust with our cash and which are absolutely critical to the smooth functioning of our economy. This is not trivial. "Risk management" is not an extraneous function of banking -- it's the essence.

If Killinger had listened to the checkers who were checking checkers, his bank might still be around and he wouldn't be staring in the face of a $900 million lawsuit. But he did the opposite. He told the checkers to authorize loans to anyone who could breathe, and ignored the risk managers who told him he was endangering the bank. And, of course, he wasn't alone. Upon further reflection, one has to wonder at the can of worms the FDIC is opening here. Because if Kerry Killinger is guilty, so is just about everyone else who ran a big bank during the housing boom.