"I remember seeing a Van Halen show and thinking to myself, that's what a ukulele concert should be like." 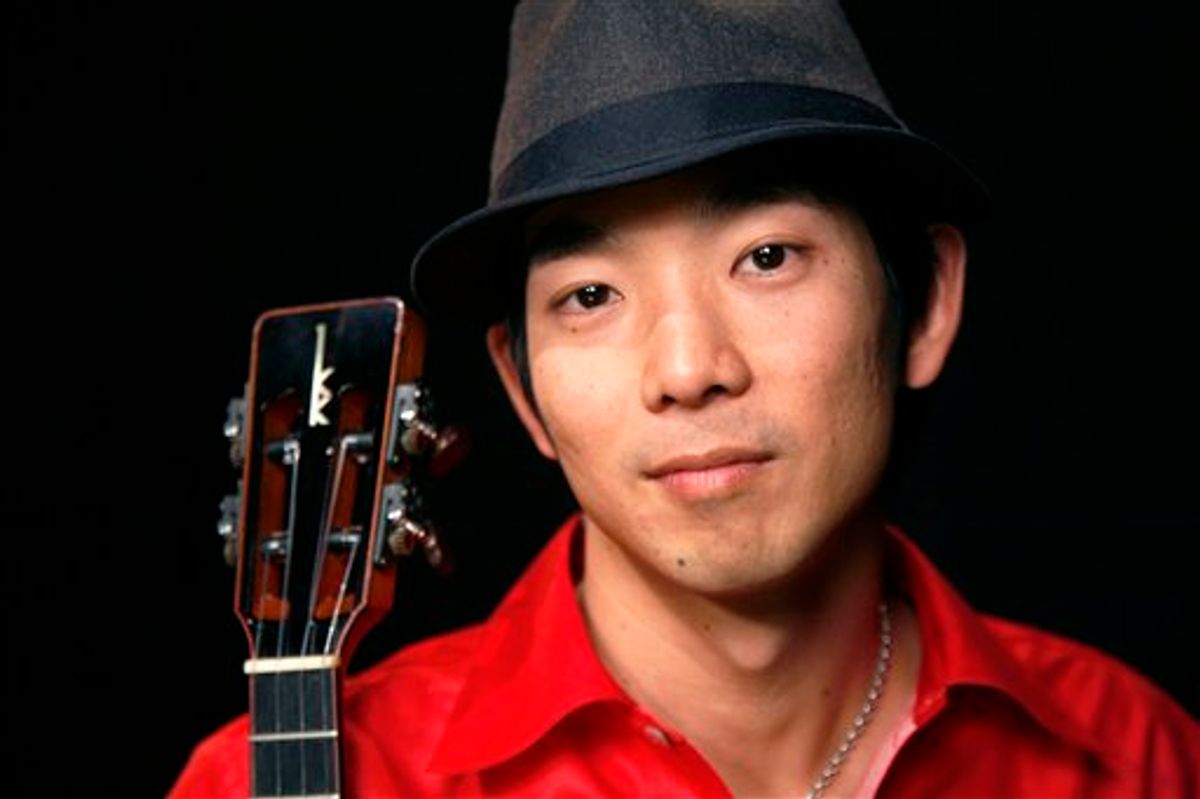 Ukulele sensation Jake Shimabukuro usually gets at least one backhanded compliment after one of his performances. The person who gives it is typically someone who's been dragged to one of his concerts -- and emerges as a converted fan.

"They have a newfound love and respect for the instrument after the show, and I think that it's great," said Shimabukuro in a recent interview. "I joke around with people and I say one of the best things about being a traveling ukulele player is that audiences all over the world have such low expectations."

But Shimabukuro, 34, has raised the bar for the ukulele, and himself, with his dynamic play on the instrument -- very different from the sometimes hokey melodies associated with it over the years. He's gotten millions of hits on YouTube for his riveting renditions of popular songs: It was a version of George Harrison's "While My Guitar Gently Weeps" that first got him widespread attention several years ago.

On his latest CD, "Peace Love Ukulele," Shimabukuro wows with his versions of "Bohemian Rhapsody" and "Hallelujah," along with his original compositions.

AP: What has this rise been like for you?

Shimabukuro: I feel very fortunate. I started playing the ukulele when I was 4 years old, and I've just always been a huge fan of this instrument. ... To see people embrace the instrument and have that same passion and enthusiasm for the ukulele, the same passion that I have for this instrument, is remarkable. It's such a blessing. I feel so honored that I get to go to all these cool places and do shows and people come and they have a good time. ... I pinch myself every morning, like, is this really happening?

AP: When you started playing the ukulele, what was the view of the instrument?

Shimabukuro: Growing up in Hawaii, everyone grew up playing the ukulele. We played a lot of traditional Hawaiian music ... it was just a very simple relaxing instrument to play. Then when I was a teenager, I got turned on to some of the rock guys. I remember seeing some concert footage of a Van Halen show and just thought to myself, wow, it's just so exciting, there's just so much energy onstage. I remember thinking to myself, that's what a ukulele concert should be like.

AP: What made you decide to stick with the ukulele and not abandon it for the guitar?

Shimabukuro: I think that a lot of it had to do with my mom played the ukulele and when we were kids, she was really my first teacher. She taught me and my younger brother how to play. I think playing the ukulele always reminded me of the time we would spend with her. My mom had to work a lot when we were kids, so we didn't get to spend a lot of time with her, so I think playing the ukulele or practicing the instrument was almost like spending time with my mom.

AP: Do you think that the ukulele is becoming more popular?

Shimabukuro: I think so... I really love what Train did with ("Hey, Soul Sister") ... the way that they used that instrument. It's the main rhythm instrument from beginning to end, they really showcased the ukulele in a way that's cool and hip. That song really grooves. It's a great tune, so for me as a fan of the ukulele, hearing the instrument used that way, for me, it's like --wow, I feel so proud. I don't have children but I imagine it's like seeing your son and daughter on stage, you just feel so good.