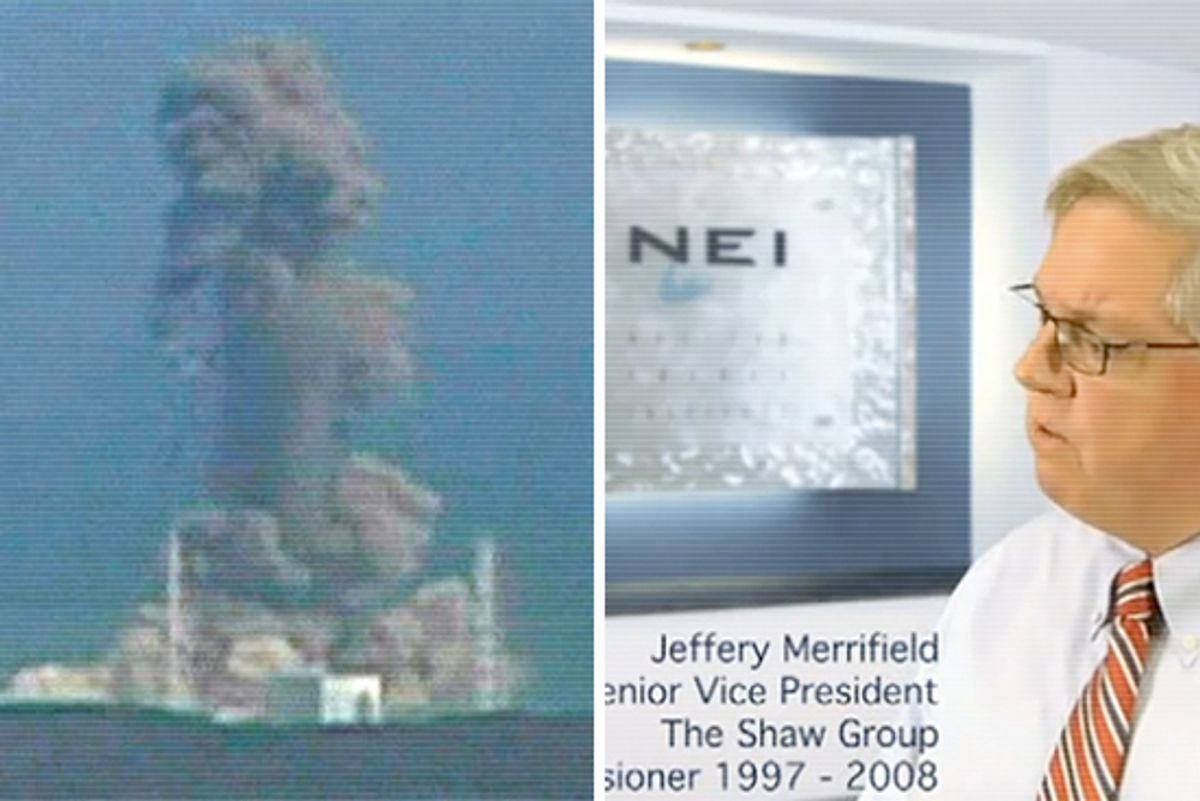 A man who spent a decade as one of the top nuclear regulators in the federal government is now helping the pro-nuclear lobby in its public-relations response to the disaster in Japan.

Jeffrey Merrifield was a Clinton and Bush appointee on the five-member Nuclear Regulatory Commission from 1997 to 2008 before leaving to become an executive at the Shaw Group, a construction giant that has provided services to 95 percent of all U.S. nuclear power plants. In the wake of the Japanese crisis, Merrifield has appeared on Fox and in Web videos produced by the nuclear industry's trade group assuring the public that nuclear power is the "right thing for our future."

The fact that a former top NRC regulator is now publicly flacking for the industry lobby will not do anything to help the reputation of the commission. The NRC is supposed to make sure nuclear plants in the U.S. are safe, but it has long been criticized as too cozy with industry and not stringent enough in its oversight standards.

During the campaign in 2007, Barack Obama said the agency had become "captive of the industries that it regulates." That same year Joe Biden was asked what confidence he had in the NRC, and he responded: "None, none, none."

Making Merrifield's new role all the more interesting, is that he was in 2009 found guilty of ethics violations for pursuing jobs with several large nuclear corporations -- including his current employer, the Shaw Group -- while he was still on the commission and casting votes on matters in which those firms had a financial stake. He is now a senior vice president in Shaw's Power Group.

The press operation of the pro-nuclear lobby, which is called the Nuclear Energy Institute, uploading two videos Thursday featuring Merrifield and touting his past role as a regulator. One is titled, "Former NRC Commissioner Confident That Building of New U.S. Nuclear Plants Should Continue."

Merrifield also went on Fox Business Wednesday, assuring the host that U.S. reactors were safer than those in other countries. "Well, it makes me feel a lot better, for one," concludes host David Asman at the end of the segment. Watch that appearance here (large file).

Merrifield was last in the news in 2009 after the NRC's inspector general found that he violated ethics rules by making phone calls to drum up job prospects in the industry while still serving as a commissioner, among other infractions. The Shaw Group also paid a few thousand dollars for a trip for Merrifield and his family to visit the company headquarters in Louisiana while he was still a commissioner, the inspector general found.

One NRC staffer told investigators that Merrifield did not keep written records about various job search-related activities because he was worried they would be ultimately released under the Freedom of Information Act. When the ethics violations were reported, Merrifield maintained that his job search did not impact his behavior on the commission.

The Nuclear Energy Institute has tapped Merrifield at a moment when it is spinning events in Japan as part of a high-stakes effort to preserve support for nuclear power in the United States.

Merrifield declined to comment for this article through a Shaw Group spokesman.