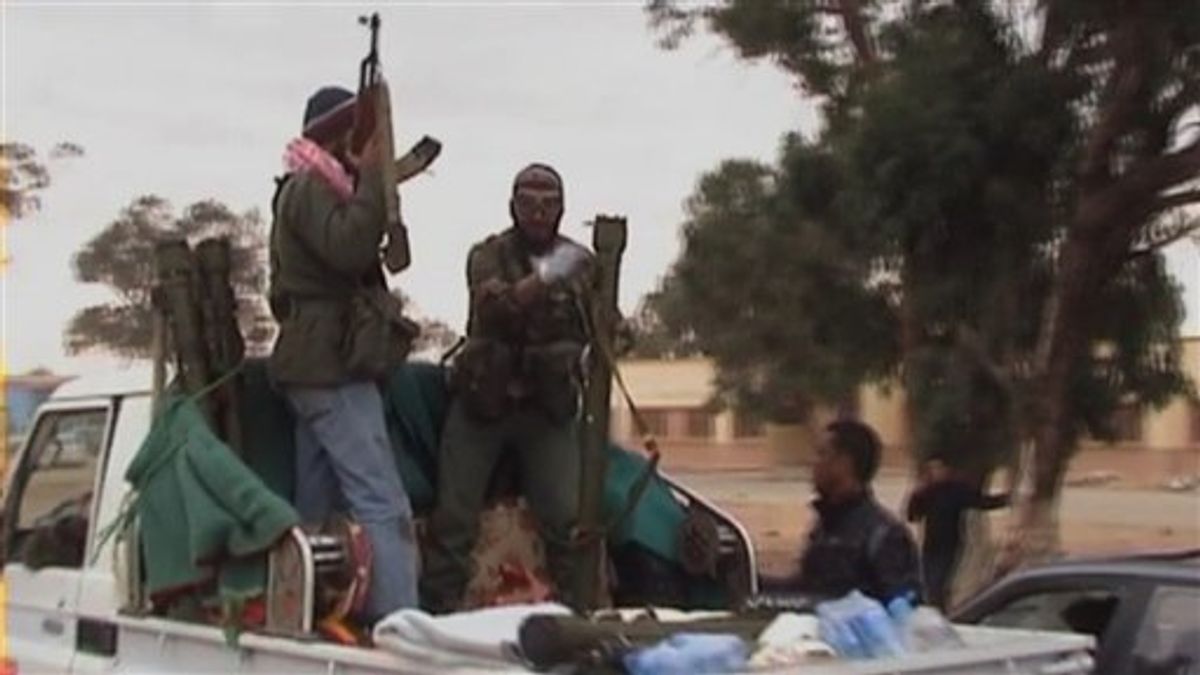 This image taken from video shows rebels on the back of a vehicle in the area of Benina, a civilian and military airport, outside Benghazi in eastern Libya Thursday March 17, 2011. Libyan rebels shot down at least two bomber planes that attacked the airport in their main stronghold of Benghazi Thursday, according to residents who witnessed the rare success in the struggle against Moammar Gadhafi's superior air power. (AP Photo/APTN) (AP)
--

Moammar Gadhafi's forces are bombarding the last rebel-held western city as the international community discusses how to enforce a no-fly zone and protect the Libyan people.

A doctor says at least six people were killed Friday when tanks moved into Misrata and opened fire. He says a hospital and a mosque were shelled.

The doctor, who spoke on condition of anonymity because he feared reprisals, says the tanks then pulled back to the outskirts of the city.

Misrata, Libya's third-largest city, 125 miles (200 kilometers) southeast of Tripoli, has been sealed off by Gadhafi troops in a blockade that has cut off most water and food supplies for days.

Rebels fighting to oust the longtime Libyan leader are on the defensive in their eastern stronghold.

Gadhafi's regime defiantly closed Libya's airspace to all traffic while the West made plans to enforce a no-fly zone and prevent his forces from attacking rebels after the U.N. authorized "all necessary measures" to protect the Libyan people, including airstrikes.

The U.N. Security Council resolution was approved late Thursday with the backing of the United States, France and Britain, hours after Gadhafi vowed to launch a final assault and crush the nearly 5-week-old rebellion against him.

President Barack Obama telephoned the leaders of Britain and France after the vote, the White House said. U.S. officials speaking after a closed-door briefing in Congress said the attempt to ground Gadhafi's air force could begin by Sunday or Monday with the use of jet fighters, bombers and surveillance aircraft.

The British Cabinet held an emergency meeting as British planes were expected to take part in the international military action. NATO envoys in Brussels also were considering next steps.

Military experts cautioned that the consequences of such action are unpredictable. The former head of the British army, Richard Dannatt, said it was crucial to proceed cautiously "so we don't get into the kind of situation that we got into in Iraq by not having a Plan B for the morning after."

But the Western powers faced pressure to act urgently after weeks spent deliberating over what to do about Gadhafi as his regime gained momentum.

Gadhafi, calling in to Libyan television on Thursday, said his forces would "rescue" the people of Benghazi, the eastern Mediterranean port city that has become the de-facto rebel capital and staging ground. For those who resist, Gadhafi said, there would be "no mercy or compassion."

"This is your happy day, we will destroy your enemies," he said, warning the people of Benghazi not to stand alongside the opposition. "Prepare for this moment to get rid of the traitors. Tomorrow we will show the world, to see if the city is one of traitors or heroes."

Gadhafi also pledged to respond harshly to U.N.-sponsored attacks in an interview with Portuguese television broadcast just before the vote. "If the world is crazy," he said, "we will be crazy, too."

His ground forces were about 80 miles (130 kilometers) south of the city on Thursday evening, so it was unclear whether they would move on the city as quickly as he suggested.

A large crowd in Benghazi was watching the vote on an outdoor TV projection and burst into cheers, with green and red fireworks exploding overhead. In Tobruk, east of Benghazi, happy Libyans fired weapons in the air to celebrate the vote.

The Brussels-based agency had no information on how long Libya's airspace would be closed but said it had halted all air traffic to Libya for 24 hours.

Libyan Deputy Foreign Minister Khaled Kaim struck a more conciliatory tone, offering to negotiate a cease-fire with the rebels. He welcomed the Security Council's concern for the people of Libya but called on the world not to allow them to receive weapons. "If any countries do that, they will be inviting Libyans to kill each other," he said.

In Tripoli on Friday, foreign journalists were barred from leaving their hotel.

The shift toward international action reflected dramatic change on the ground in Libya in the past week. The rebels, once confident, found themselves in danger of being crushed by an overpowering pro-Gadhafi force using rockets, artillery, tanks, warplanes. That force has advanced along the Mediterranean coast aiming to recapture the rebel-held eastern half of Libya.

Gadhafi troops encircled the city of Ajdabiya, the first in the path of their march, but also had some troops positioned beyond it toward Benghazi.

The unrest in Libya began Feb. 15 in the eastern city of Benghazi and spread east to Tripoli, the capital. Like others in the Mideast, the protest started with popular demonstrations against Gadhafi, rejecting his four decades of despotic and often brutal rule. The tone quickly changed after Gadhafi's security in Tripoli forcefully put down the gatherings there.

Soon rebel forces began arming themselves, quickly taking control of the country's east centered on Benghazi, the second largest Libyan city, with a population of about 700,000. Some Libyan army units joined the rebels, providing them with some firepower, but much less than Gadhafi's remaining forces, and crucially, no air power.

There are no official death tolls. Rebels say more than 1,000 people have been killed in a month of fighting, while Gadhafi claims the toll is only 150.

Associated Press writers Slobodan Lekic in Brussels and Jill Lawless in London contributed to this report.