This time it was Jewish passengers performing a prayer ritual that set off alarms. What the heck is wrong with us? 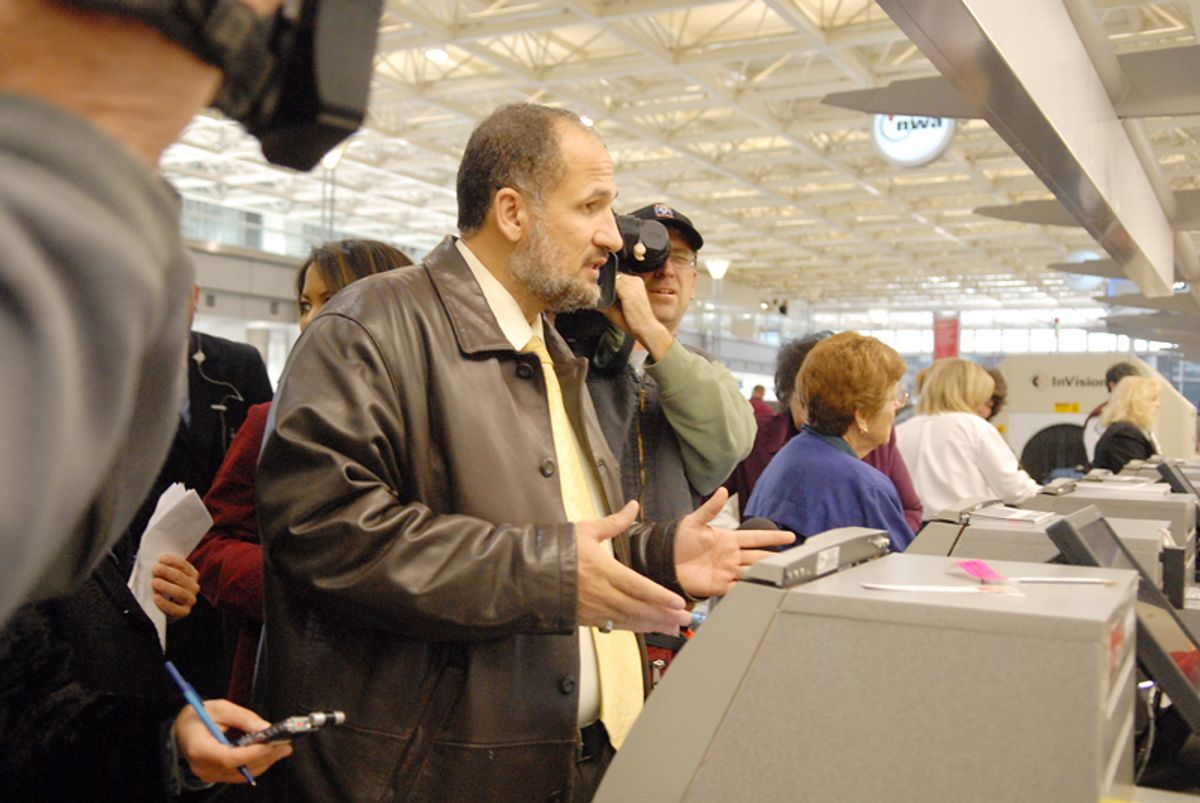 Omar Shahin, one of six imams removed from a US Airways flight at the Minnepolis-St. Paul International Airport, waits at the Northwest counter, where he successfully purchased a ticket on Nov. 21, 2006.
--

On Sunday, March 13, crew members of an Alaska Airlines 737 grew startled after three Jewish passengers took part in a prayer ritual during flight. Then three men donned leather arm straps and tefillin -- small boxes containing strips of scripture that devout Jews attach to their foreheads -- and began praying in Hebrew. The crew became so alarmed that the cockpit was placed under "lockdown" and the jet was met at LAX by a phalanx of crash trucks, ambulances, FBI and local police. The three men, all Mexican nationals, were released after questioning.

My reaction to this was to sit, have a glass of cold water, take some deep breaths and picture a Happy Place.

First, the devil's advocate stuff: Realizing that we live in a society that can hardly tell up from down anymore, is it really smart, or necessary, for devotees of whatever faith to engage in this sort of thing during a commercial airline flight? And if you must, would it not be prudent to head off any overreactions by, for example, letting people know what you're doing?

Now, with that out of the way, the bigger question is this: What the heck is the matter with us?

It'd be crass of me to throw my colleagues under the bus, but it does not appear that this was a case of erring on the side of caution. It looks to me like full-blown hysteria. Never mind that Jewish travelers are often seen praying in this fashion, is it really necessary to drop immediately into "Alert Level Orange" crisis mode rather than first using some common bloody sense? How much wasted money and time resulted from this panic?

Passengers are notorious for losing their minds in and around airplanes. As for crews, we have less of an excuse, and there is nothing in our books or protocols that says he have to respond foolishly to every mildly peculiar situation.

But wait, that's not the worst of it.

Ognjen Milatovic, a 37-year-old mathematics professor, was arrested earlier this year at Boston's Logan International Airport after passengers heard "suspicious noises" coming from his carry-on luggage. One passenger told police that he had also seen Milatovic make what was described as a "furtive movement."

When asked about his luggage while the plane was still at the gate, Milatovic reportedly began chatting on his cellphone and refused to put it down. He was cuffed and taken away on charges of disorderly conduct and disobeying the orders of a flight crew -- the latter being a federal offense.

The bag was found to contain keys, a hat, a wallet and a bagel.

We continue to witness troubling acts of passenger hysteria -- as well as sometimes overzealous actions on the part of flight crews. I thought -- or hoped -- this was something we'd left behind several years ago, but apparently not. (Usually, though not always, the suspect passengers are those described loosely as "Middle Eastern-looking" -- a sort of rude shorthand that, in the minds of many Americans, describes an imaginary ethnic zone ranging from, roughly, Morocco to China.) Such reactionary and self-defeating behavior puts much at stake -- your time, your tax dollars, your liberties.

Below are just a few of the greatest hits of Passenger Vigilantism, as seen since the terrorist attacks of 2001: