Mad scientists of lawmaking are looking to go medieval on America. Here are six examples 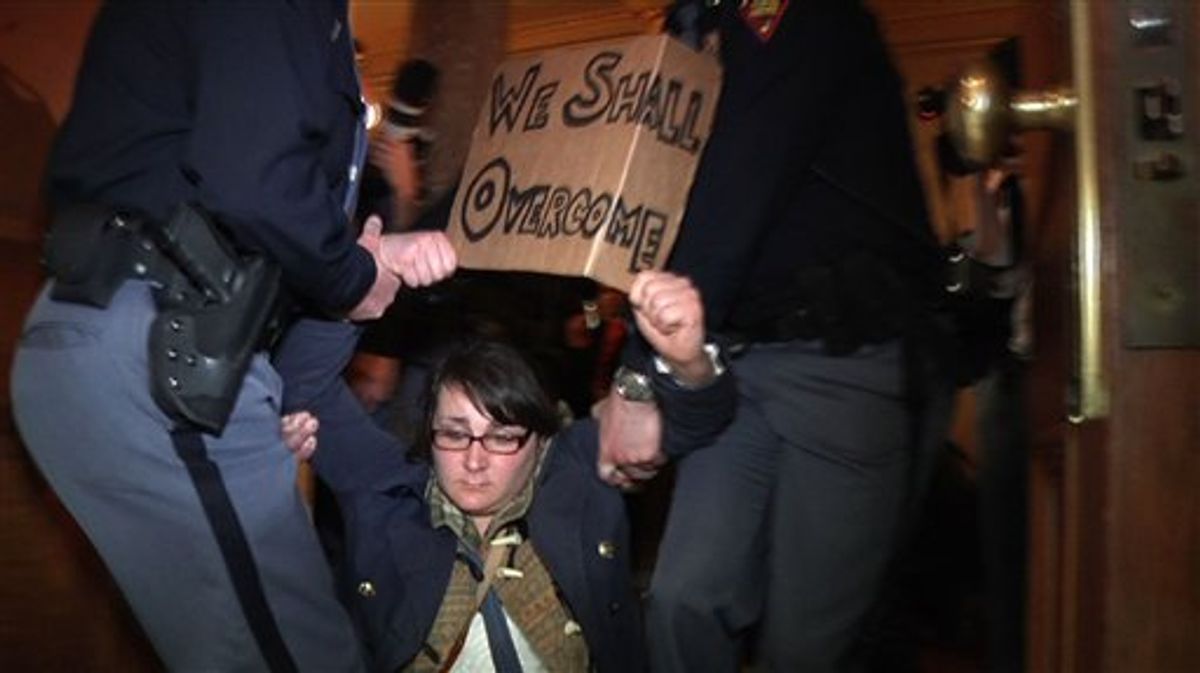 In this image from video, police carry off a demonstrator during a protest at the State Capitol, Thursday, March 10, 2011, in Madison, Wis. Police carried dozens of protesters from a hallway leading to the Wisconsin Assembly on Thursday as Democratic representatives pounded on the locked door of the chamber, demanding to be let in to the room where a vote was scheduled on an explosive bill that would take away public workers' collective bargaining rights. (AP Photo/Robert Ray) (AP)
--

Supreme Court Justice Louis Brandeis once said that states are the "laboratories of democracy." Oft repeated over time, the aphorism has helped impart legitimacy to the rough and tumble of state lawmaking. We've heard "laboratory" and we've imagined staid scientists in white coats rigorously testing forward-thinking theories of societal advancement.

It's certainly a reassuring picture -- but there is a darker side of the metaphor. States are indeed laboratories. The problem is that today, those laboratories are increasingly run by mad scientists.

We're not talking about the usual Dr. Frankensteins trying to bring alive new corporate giveaways through harebrained cuts to social services (though there are those, too). We're talking about true legislative sadists looking to go medieval on America. Behold just six of the most telling examples:

The Anti-Life Pro-Life Act: After antiabortion Republicans in Congress tried to narrow the legal definition of rape, Nebraska Republican state Sen. Mark Christensen took the assault on women's rights one step further with a bill to legitimize the murder of abortion providers by classifying such homicides as "justified."

The Let Them Eat Corporate Tax Cuts Act: As poverty rates and hunger have risen, so, too, have corporate profits. The Georgia Legislature's response? Intensify the inequity with a bill to create a regressive sales tax on food that would then finance a brand-new corporate tax cut.

The Demoralize the Workforce Act: Wisconsin Gov. Scott Walker didn't just threaten to deploy the National Guard against state workers unless they accept big pay and pension cuts. Apparently, that was too Kent State and not enough Ludlow Massacre for him. So he pressed to statutorily bar those workers from ever again collectively bargaining.

The Child Labor Act: Missouri state Sen. Jane Cunningham's proposal to eliminate child labor laws would allow corporations to employ any kid under 14 and would terminate restrictions on the number of hours that kid can be forced to work. The legislation is proof that when Tea Party ideologues refer to "the '50s," some of them aren't referring to the 1950s -- they are referring to the 1850s.

The Obesity and Deficit Encouragement Act: Colorado exemplifies America's childhood obesity epidemic and its budget crisis. The state's childhood obesity rate grew at the second fastest rate in the country, and its $1.2 billion budget gap is threatening the state's already underfinanced schools. Yet, despite the U.S. Department of Agriculture showing that higher soda taxes would drive down obesity, and despite such a levy raising much-needed public revenues, Colorado's newly Republican House is pushing legislation to create a special budget-busting sales tax exemption exclusively for soda.

The Endorsing Your Own Demise Act: Between trying to legalize hunting with hand-thrown spears and pressing to eliminate education requirements for those seeking the office of state superintendent of schools, Montana's Republican lawmakers are also considering legislation to officially endorse catastrophic global climate change. That's right, in the face of a Harvard study showing that climate change could destroy Montana's water supplies, agriculture industries and forests, state Rep. Joe Read's bill would declare that "global warming is beneficial to the welfare and business climate of Montana."

If you don't live in one of these states, it's easy to tell yourself that these bills don't affect you. But history suggests that what happens in one "laboratory" is quite often replicated in others -- and ultimately, in the nation's capital. That's why we should all hope saner minds cut short these experiments before they get even more out of control.