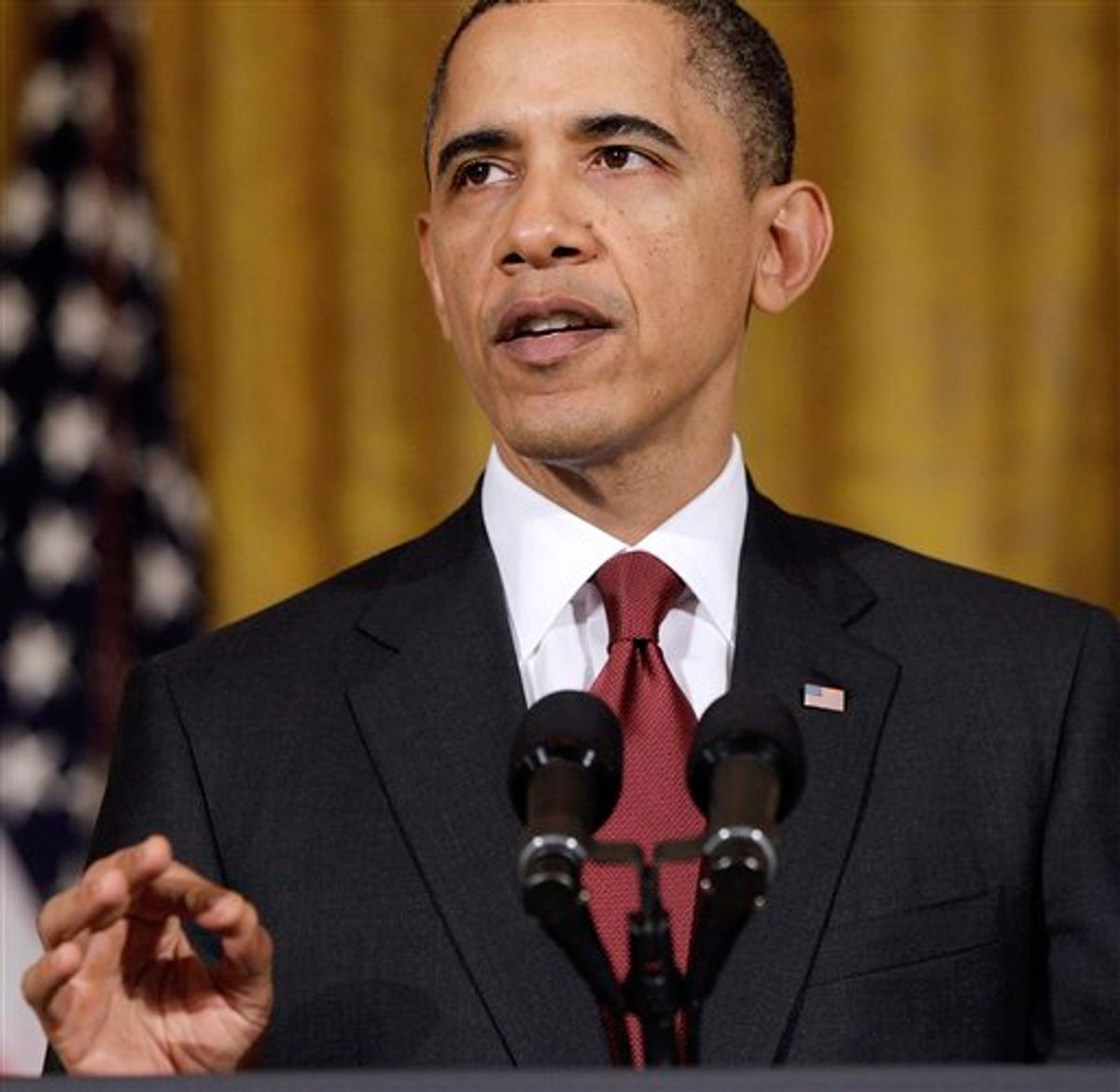 President Barack Obama makes a statement on Libya, Friday, March 18, 2011, in the East Room of the White House in Washington. (AP Photo) (AP)
--

President Barack Obama demanded Friday that Moammar Gadhafi halt all military attacks on civilians and said that if the Libyan leader did not stand down the United States would join other nations in launching military action against him.

But the president also stressed the United States "is not going to deploy ground troops into Libya."

In a brief appearance at the White House, Obama said Secretary of State Hillary Rodham Clinton would travel to Paris on Saturday to join allies in discussing next steps in Libya, where Gadhafi has pressed a brutal crackdown against rebels trying to end his 42-year reign.

Stressing that the United States was acting in concert with European allies and Arab nations, the president said, "Our goal is focused, our cause is just and our coalition is strong."

Obama's remarks came less than 24 hours after the United Nations Security Council voted to authorize military action -- including a "no-fly zone" over Libya -- to prevent the killing of civilians by Gadhafi's forces.

The president spoke with congressional leaders before his public statement, but an official said no request was made for formal congressional action.

"I commend the president for his leadership and prudence on how our nation will proceed in regards to Libya and work in concert with European and Arab allies to address the crisis," she said in a written statement.

At the White House, Obama said there should be no doubt about Gadhafi's intentions "because he has made them clear. Just yesterday, speaking of the city of Benghazi, a city of roughly 700,000, he threatened 'we will have no mercy and no pity.' No mercy on his own citizens."

The president has been criticized by some U.S. lawmakers and others for not moving more forcefully while Gadhafi has regrouped in recent days and taken the offensive against the rebels. Obama said the United States and other nations have imposed sanctions on Libya, frozen assets of the leader and delivered humanitarian supplies to bordering countries to help ease the plight of thousands fleeing the fighting.

"Now, once more, Moammar Gadhafi has a choice," Obama said, listing what he said were non-negotiable conditions laid out by the U.N. Security Council.

"If Gadhafi does not comply, the international community will impose consequences, and the resolution will be enforced through military action," Obama said.

He did not specify what responsibilities would fall to the United States if military action is carried out against Gadhafi, but officials have said previously that American forces would help enforce a no-fly zone to prevent the Libyan leader from using his air force to bomb civilians.

The president made no reference to a Libya's declaration of an immediate cease-fire on Friday -- a statement that a rebel spokesman said was fiction.

Instead, Obama listed a series of demands for Gadhafi, including the halting of all attacks against civilians, a stop to military action against Benghazi and other cities and permission for humanitarian supplies to reach the civilian population of the country.

"Let me be clear, these terms are not negotiable," he said.

"Our goal is focused, our cause is just, and our coalition is strong," the president said.

He emphasized that the United States was not acting alone but in concert with Britain, France and Arab countries he did not name.

"Change in the region will not and cannot be imposed by the United States or any foreign power. Ultimately, it will be driven by the people of the Arab world," he said.

The uprising against Gadhafi is only one of many struggles being played out in the region as long-time autocratic regimes come under pressure. Protests in Tunisia and Egypt have led to the ouster of long-time rulers, and there have been demonstrations in Yemen, Jordan and Bahrain. Protests erupted in at least three parts of Syria during the day Friday, according to state television and other source

Earlier, Clinton told reporters that Gadhafi must make "a very clear set of decisions" to halt violence against anti-government rebels.

Clinton said the U.S. had seen the reports of a cease-fire by the Libyan government, but she added that the American government was not going to be "impressed by words." She said the immediate objective of any intervention was to halt the violence against civilians, but insisted that the "final result of any negotiation would have to be the decision by Col. Gadhafi to leave."

The U.S. has ships and warplanes within striking distance of Libya, including submarines and surface ships armed with Tomahawk cruise missiles. If military action were to proceed, a first step likely would involve attacks on Libyan air defenses, including radar and surface-to-air missile sites along its Mediterranean coastline. That would allow aircraft enforcing a no-fly zone to maneuver with impunity.

The nearest U.S. aircraft carrier, the USS Enterprise, was far to the east, in the Arabian Sea supporting air operations in Afghanistan. The Pentagon gave no indication that substantial additional firepower was being moved toward Libya, even as it focused on providing humanitarian relief in stricken northern Japan.

Britain, France and NATO were holding emergency meetings Friday on using military force to enforce a no-fly zone. NATO Secretary-General Anders Fogh Rasmussen said the alliance was "completing its planning to be ready to take appropriate action in support of the U.N. resolution as part of the broad international effort."

Officials announced that the leaders of Britain, France and Germany and the chiefs of the United Nations and Arab League would join other world leaders for an emergency summit on Libya in Paris on Saturday.