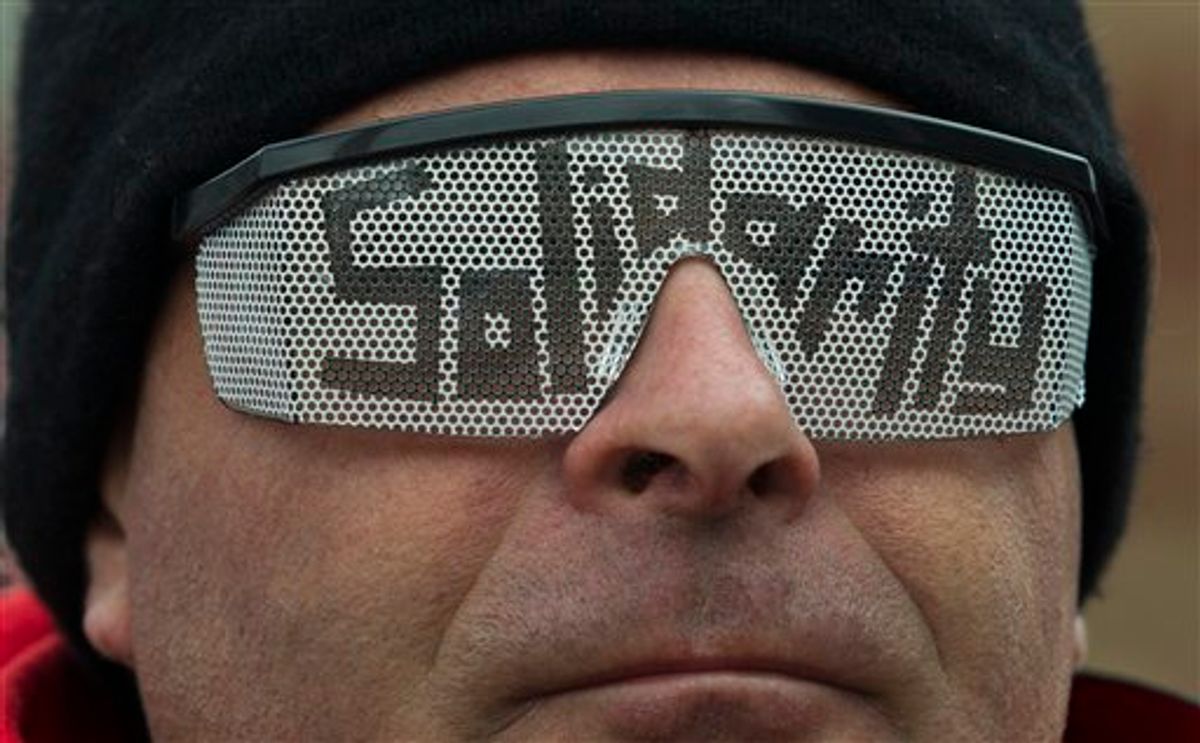 Buzz Soderman of Dalton, Wis, protests outside the state Capitol Saturday, March 12, 2011, in Madison, Wis. While Gov. Scott Walker has already signed a contentious collective bargaining bill into law, demonstrators insist the fight is not over. For some, the focus has shifted from trying to stop passage of the bill to generating momentum for recall efforts against Republicans. Others are simply venting their frustration over the law taking away most of public workers' collective bargaining rights.(AP Photo/Morry Gash) (AP)
--

A Wisconsin judge issued a temporary restraining order Friday blocking the state's new and contentious collective bargaining law from taking effect, a measure that drew tens of thousands of protesters to the state Capitol and sent some Democrats fleeing to Illinois in an tempt to block a vote on it.

The judge's order is a major setback for Walker and puts the future of the law in question.

Dane County Judge Maryann Sumi issued the order, which was requested by that county's District Attorney Ismael Ozanne, a Democrat. Ozanne filed a lawsuit contending that a legislative committee that broke a stalemate that had kept the law in limbo for weeks met without the 24-hour notice required by Wisconsin's open meetings law. The Republican-controlled Legislature passed the measure and Gov. Scott Walker signed it last week.

Secretary of State Doug La Follette planned to publish the law on Mach 25, but the judge's order will prevent that from happening, at least for now.

A spokesman for Republican Senate Majority Leader Scott Fitzgerald declined to comment, citing the legal fight. Messages left for comment with Walker's spokesmen, as well as Democratic legislative leaders, were not immediately returned.

The bill was part of Walker's solution for plugging a $137 million state budget shortfall. A part of the measure would require state workers to increase their health insurance and pension contributions to save the state $30 million by July 1. Other parts of Walker's original proposal to address the budget shortfall were removed before the bill passed last week. The Legislature planned to take those up later. Lawmakers are not scheduled to be in session again until April 5.

People opposed to the law converged on the state Capitol over the past month with massive demonstrations that went on for days on end.