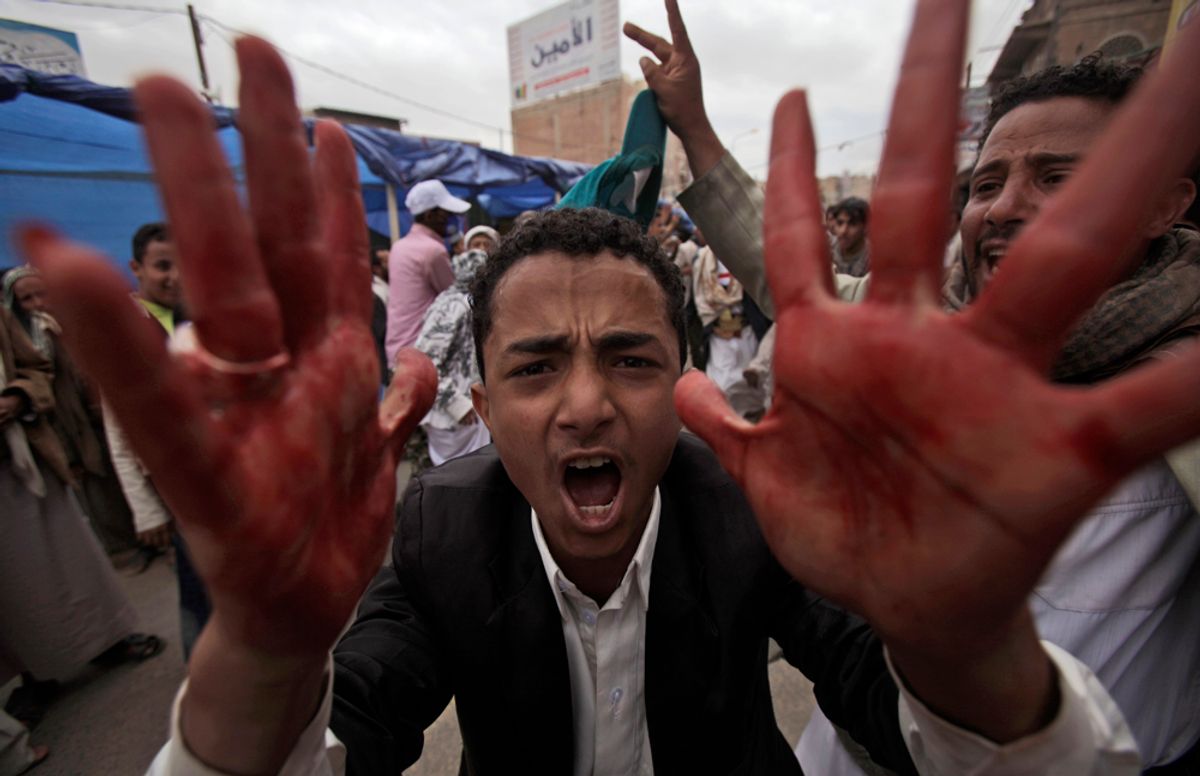 An anti-government protestor shouts with blood on his hands during clashes in Sanaa, Yemen, Friday, March 18, 2011.
--

I'm referring to the situations in Libya and Yemen, which are, of course, very different -- the civil war in Libya is much more dire than the clashes between the government and protesters in Yemen. Still, it's another striking example of the selective invocation of human rights by the United States.

Yemen's Ali Abdullah Saleh is a a U.S. ally who lets the American military fire missiles at suspected Al Qaeda targets in his territory. Since early February, Saleh's government has been using violence in an attempt to quell a protest movement.

But today, the response by police to protests in the capital of Sanaa escalated considerably. From the AP:

Yemeni doctors say at least 31 people have been killed by security forces who opened fire on an anti-government demonstration in the Yemeni capital and that dozens have been wounded.

Police started shooting at the protesters rallying outside the Sanaa University from rooftops and nearby houses as demonstrators filled the square after Friday prayers.

It will be interesting to see if the Obama administration has a substantive response to what's happening, or if Saleh gets a pass.

UPDATE: The AP gets some video of doctors treating the wounded (warning: somewhat graphic).

UPDATE II: And now President Obama has issued this statement:

I strongly condemn the violence that has taken place in Yemen today and call on President Saleh to adhere to his public pledge to allow demonstrations to take place peacefully. Those responsible for today’s violence must be held accountable. The United States stands for a set of universal rights, including the freedom of expression and assembly, as well as political change that meets the aspirations of the Yemeni people. It is more important than ever for all sides to participate in an open and transparent process that addresses the legitimate concerns of the Yemeni people, and provides a peaceful, orderly and democratic path to a stronger and more prosperous nation.