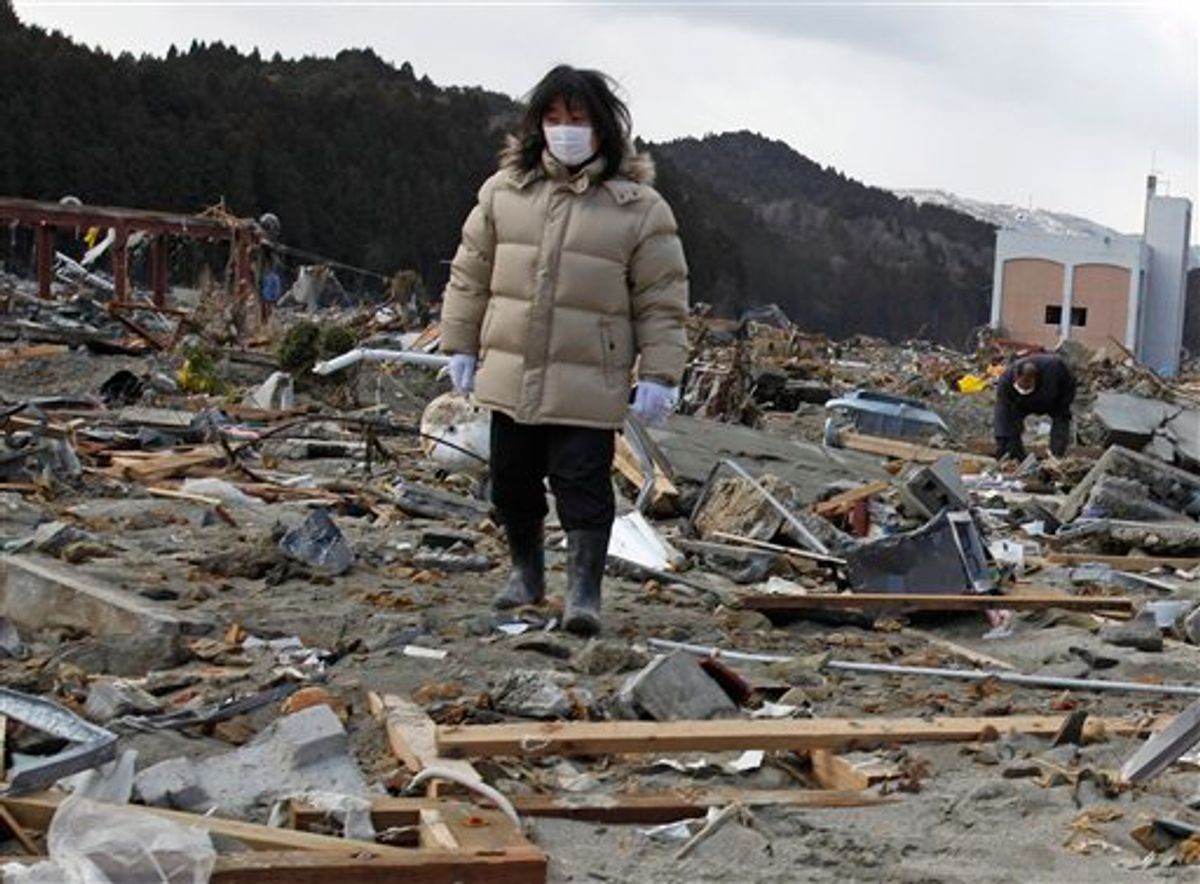 A woman searches for her missing husband through the earthquake and tsunami-hit town of Minamisanriku, Miyagi Prefecture, Friday, March 18, 2011. (AP Photo/Shuji Kajiyama) (AP)
--

The Japanese government reports that trace amounts of radioactive iodine were detected in tap water in Tokyo and five other areas, amid concerns about leaks from a damaged nuclear power plant.

A government ministry reported Saturday that small amounts of the iodine was found in tap water in Tokyo and five other prefectures. The ministry says the amounts did not exceed government safety limits but usual tests show no iodine.

But the findings add to public concerns about radiation leaking from the Fukushima nuclear power plant crippled by the earthquake and tsunami.

Meanwhile, U.N. radiation tracking from the plant shows levels taken elsewhere in the country, as well as in Russia and California, are minuscule, a diplomat with access to the readings said Saturday.

Officials said that radiation levels in spinach and milk from farms near the nuclear complex exceeded government safety limits, even though they represented no immediate health risk.

The Vienna-based diplomat said the atmospheric measurements are 100 million to 1 billion times less than health-threatening levels.

He said the readings were taken on Friday at Takasaki, Japan, about 330 kilometers (200 miles) southwest of the accident site near the city of Fukushima; at Petropavlosk-Kamchatsky on Russia's Kamtchatka Peninsula; and at Sacramento, California.

Set up to monitor all nuclear testing, the CTBTO's worldwide network of stations can also detect earthquakes, tsunamis and fallout from accidents such as the disaster on Japan's northeastern coast that was set off by a massive earthquake and a devastating tsunami eight days ago.

The diplomat asked for anonymity because the CTBTO does not make its data public.

In Japan, tainted milk was found 20 miles (30 kilometers) from the plant, while the spinach was collected between 50 miles (80 kilometers) and 65 miles (100 kilometers) to the south, Chief Cabinet Secretary Yukio Edano told reporters in Tokyo.

While the radiation levels exceeded the limits allowed by the government, Edano said that the products "pose no immediate health risk" and that more testing was being done on other foods.