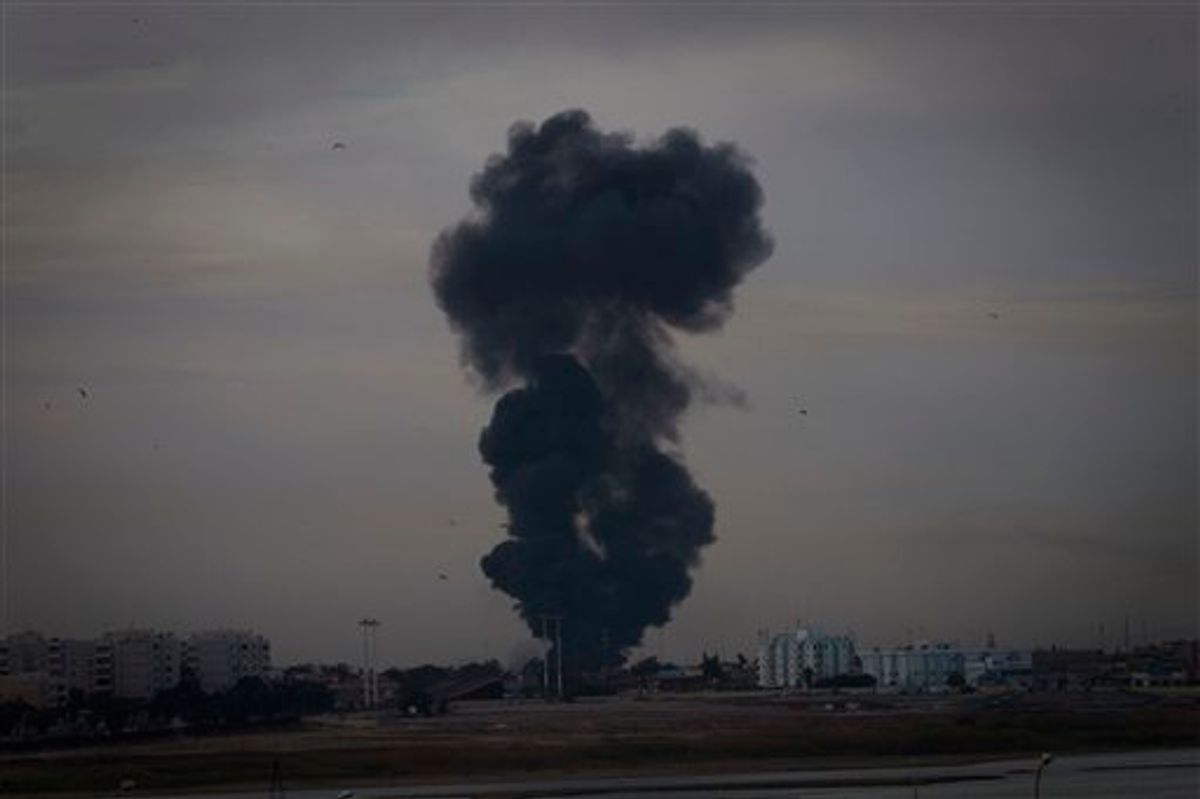 Smoke billows over the outskirts of Benghazi, eastern Libya, Saturday, March 19, 2011. Explosions shook the Libyan city of Benghazi early on Saturday while a fighter jet was heard flying overhead, and residents said the eastern rebel stronghold was under attack from Gadhafi's forces. (AP Photo/Anja Niedringhaus) (AP)
--

Moammar Gadhafi took advantage of international indecision to attack the heart of the 5-week-old uprising on Saturday, sending troops, tanks and warplanes to swarm the first city seized by the rebels. Crashing shells shook buildings, and the sounds of battle drew closer to Benghazi's center.

Leaders from the Arab world, the United States and other Western powers are holding urgent talks in Paris over possible military action, and France's ambassador to the United Nations, Gerard Araud, told BBC Newsnight that he expected military action to begin within hours of the meeting. In an open letter, Gadafhi warned: "You will regret it if you dare to intervene in our country."

On Saturday, a warplane was shot down over the outskirts of Benghazi, sending up a massive black cloud of smoke. An Associated Press reporter saw the plane go down in flames and heard the sound of artillery and crackling gunfire.

Abdel-Hafez, a 49-year-old Benghazi resident, said rebels and government soldiers were fighting on a university campus on the south side of the city, with government tanks moving in, followed by ground troops. In the city center, tank fire drew closer and rebel shouts rang out.

At a news conference in the capital, Tripoli, the government spokesman read letters from Gadhafi to President Barack Obama and others involved in the international effort.

"Libya is not yours. Libya is for the Libyans. The Security Council resolution is invalid," he said in the letter to French President Nicolas Sarkozy, British Prime Minister David Cameron, and U.N. Secretary-General Ban Ki-Moon.

Government spokesman Moussa Ibrahim said the rebels are the ones breaking the cease fire by attacking military forces.

"Our armed forces continue to retreat and hide, but the rebels keep shelling us and provoking us," Musa told The Associated Press.

Parts of eastern Libya, where the once-confident rebels this week found their hold slipping, erupted into celebration at the passage of the U.N. resolution. But the timing and consequences of any international military action remained unclear.

Misrata, Libya's third-largest city and the last held by rebels in the west, came under sustained assault well after the cease-fire announcement, according to rebels and a doctor there. The doctor, who spoke on condition of anonymity because he feared reprisals, said Gadhafi's snipers were on rooftops and his forces were searching homes for rebels.

Foreign Minister Moussa Koussa said that Libyan officials had informed the U.N. and the Security Council that the government was holding to the cease-fire and called for a team of foreign observers to verify that.

"The nation is respecting all the commitments put on it by the international community," he said, leaving the podium before answering any questions about Benghazi.

Al-Shalchi contributed to this report from Tripoli, Libya.