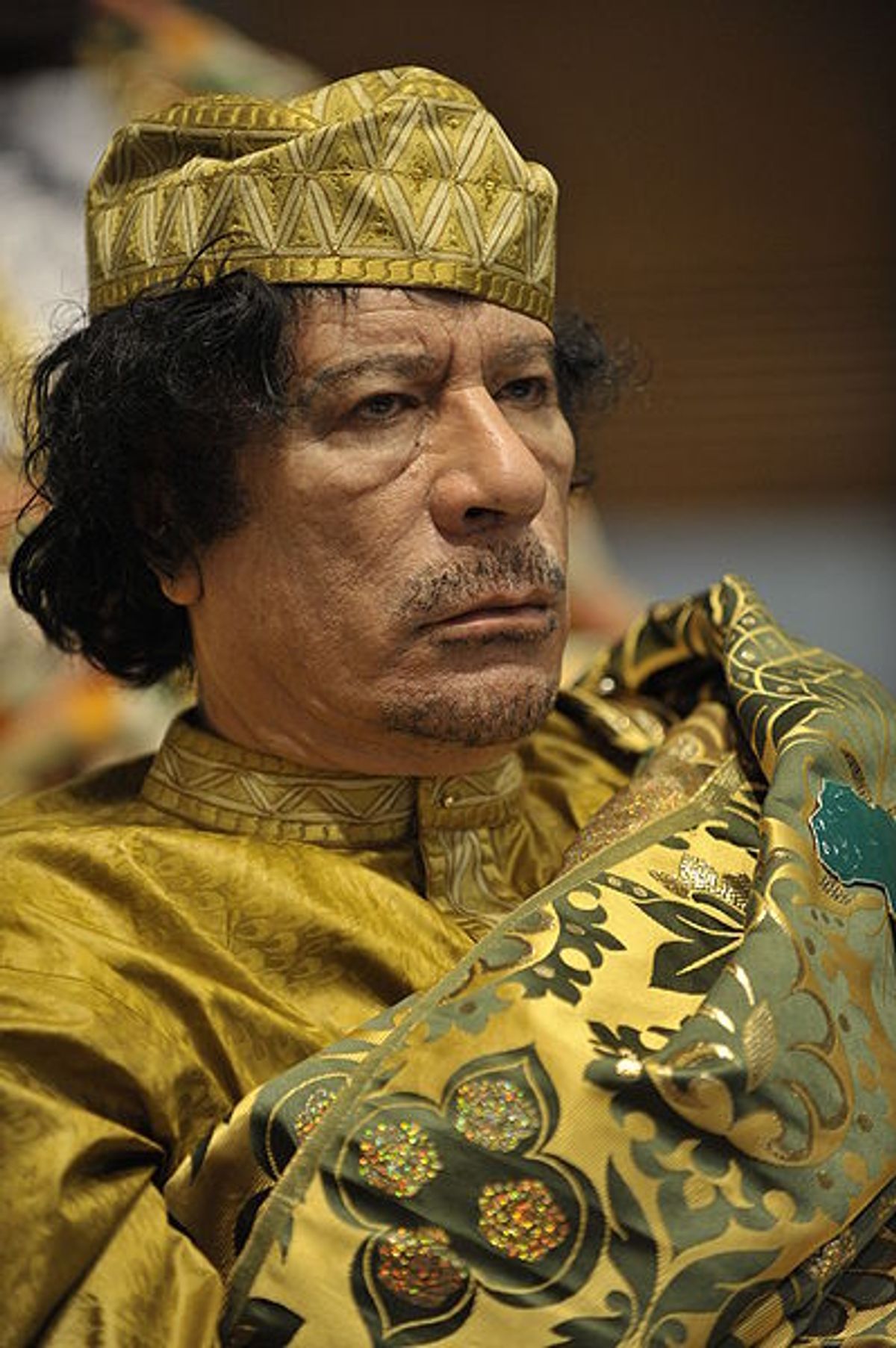 Moammar Gadhafi is vowing Libya will defend itself from what he calls "crusader aggression," as U.S.-led international forces begin an attack in support of the rebel uprising against him.

The Libyan leader says the involvement of international forces will subject the Mediterranean and North African region to danger and put civilians at risk.

He also warns that weapons depots are being opened to arm the Libyan people in defense.

Hours earlier, the U.S. fired more than 100 cruise missiles at his air defenses.

Gadhafi spoke around midnight Saturday in a phone call to Libyan state TV.

He said the international action against his forces was unjustified, calling it "simply a colonial crusader aggression that may ignite another large-scale crusader war."

The U.S. military said 20 sites were hit as the missile strikes targeted air defense installations on or near the Mediterranean coastline, many in the western half of the country that is Gadhafi's stronghold. The French said they were focusing on the rebel-held east.

Libyan regime official Mohammed al-Zwei claimed a large number of civilians were injured when several civilian and military sites in the capital, Tripoli, and the nearby city of Misrata were hit.

"This barbaric aggression against the Libyan people comes after we had announced a cease-fire against the armed militias which are part of al-Qaida in the Islamic Maghreb," he said. The targets could not be independently verified.

Gadhafi also acted quickly in the run-up to the strikes, sending warplanes, tanks and troops into the eastern city of Benghazi, the rebel capital and first city to fall to the rebellion that began Feb. 15. Then the government attacks appeared to go silent.

The international strikes came hours after an emergency summit in Paris during which the 22 leaders and top officials, including Arab League Secretary-General Amr Moussa, agreed to do everything necessary to make Gadhafi respect a U.N. Security Council resolution Thursday calling for the no-fly zone and demanding a cease-fire, French President Nicolas Sarkozy said.

"Our consensus was strong, and our resolve is clear. The people of Libya must be protected, and in the absence of an immediate end to the violence against civilians our coalition is prepared to act, and to act with urgency," Obama said earlier.

Navy Vice Adm. William E. Gortney, director of the Pentagon's Joint Staff, told reporters in Washington that U.S. and British ships and submarines had launched the first phase of a missile assault on Libyan air defenses to clear the way for the imposition of a U.N.-mandated no-fly zone over the North African country.

Gortney said the mission has two goals: prevent further attacks by Libyan forces on rebels and other civilians, and degrade the Libyan military's ability to contest a no-fly zone.

Mohammed Ali, a spokesman for the exiled opposition group the Libyan Salvation Front, said the Libyan air force headquarters at the Mateiga air base in eastern Tripoli, and the Aviation Academy in Misrata had been targeted.

About 20 French fighter jets carried out "several strikes" earlier Saturday, military spokesman Thierry Burkhard told The Associated Press. He said earlier that one of the planes had fired the first shot against a Libyan military vehicle.

"All our planes have returned to base tonight," he said, and denied a Libyan TV report that a French plane had been hit.

The U.S. has struck Libya before. Former President Reagan launched U.S. airstrikes on Libya in 1986 after a bombing at a Berlin disco -- which the U.S. blamed on Libya -- that killed three people, including two American soldiers. The airstrikes killed about 100 people in Libya, including Gadhafi's young adopted daughter at his Tripoli compound.

The rebels said earlier that they had hoped for more, sooner from the international community, after a day when crashing shells shook the buildings of Benghazi and Gadhafi's tanks rumbled through the university campus.

"People are disappointed, they haven't seen any action yet. The leadership understands some of the difficulties with procedures but when it comes to procedures versus human lives the choice is clear," said Essam Gheriani, a spokesman for the opposition. "People on the streets are saying where are the international forces? Is the international community waiting for the same crimes to be perpetrated on Benghazi has have been done by Gadhafi in the other cities?"

A doctor said 27 bodies had reached hospitals by midday. As night fell, though, the streets grew quiet.

Libyan state television also showed Gadhafi supporters converging on the international airport and a military garrison in Tripoli, and the airport in Gadhafi's hometown of Sirte, in an apparent attempt to deter bombing.

In an open letter, Gadhafi warned: "You will regret it if you dare to intervene in our country."

In Paris, U.S. Secretary of State Hillary Rodham Clinton said Gadhafi's government had lost all legitimacy and lied about the cease-fire.

"We have every reason to fear that left unchecked, Gadhafi will commit unspeakable atrocities," she said.

Saturday's emergency meeting in Paris, which also included U.N. Secretary-General Ban Ki-Moon and the foreign ministers of Jordan, Morocco and the United Arab Emirates, was the largest international military action since the beginning of the Iraq war, launched almost exactly eight years ago.

"The time for action has come, it needs to be urgent," British Prime Minister David Cameron said after the summit.

Earlier Saturday, a plane was shot down over the outskirts of Benghazi, sending up a massive black cloud of smoke. An Associated Press reporter saw the plane go down in flames and heard the sound of artillery and crackling gunfire.

But at Jalaa hospital, where the tile floors and walls were stained with blood, the toll was clear.

"There are more dead than injured," said Dr. Ahmed Radwan, an Egyptian who had been there helping for three weeks.

At a news conference in the capital, Tripoli, the government spokesman read letters from Gadhafi to Obama and others involved in the international effort.

"Libya is not yours. Libya is for the Libyans. The Security Council resolution is invalid," he said in the letter to Sarkozy, British Prime Minister David Cameron, and U.N. Secretary-General Ban Ki-Moon.

Foreign Minister Moussa Koussa said that Libyan officials had informed the U.N. and the Security Council that the government was abiding by the cease-fire it had announced Friday and called for a team of foreign observers to verify that.

The oil minister, Shukri Ghanem, held a news conference calling on foreign oil companies to send back their workers. He said the government would honor all its contracts.

"We are still considering all our contracts and agreements with the oil companies valid," he said. "We hope from their part that they will honor their agreements, that they will send back their experts and their people to work."

He suggested future decisions on oil deals would favor countries that did not join the international force against Gadhafi: "A friend in need is a friend indeed," he told reporters in Tripoli.

Italy, which had been the main buyer for Libyan oil, offered the use of seven air and navy bases already housing U.S., NATO and Italian forces to enforce the no-fly zone over Libya.

Italy's defense minister, Ignazio La Russa, said Saturday that Italy wasn't just "renting out" its bases for others to use but was prepared to offer "moderate but determined" military support.

Warplanes from the United States, Canada, Denmark arrived at Italian air bases Saturday as part of an international military buildup. Germany backed the operation but isn't offering its own forces.