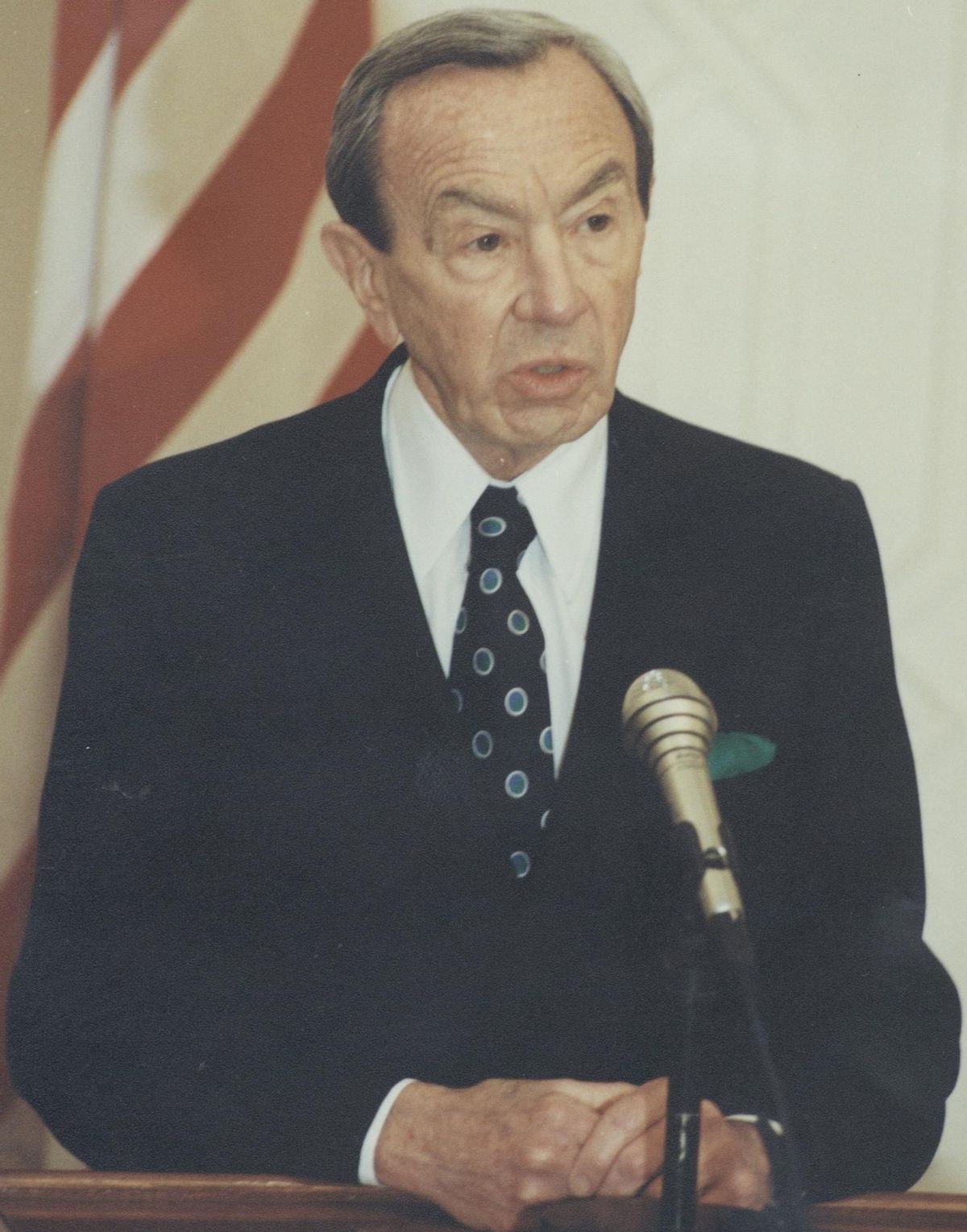 When he took over as secretary of state in the Clinton administration at age 68, Warren M. Christopher said he didn't expect to travel much. He went on to set a four-year mark for miles traveled by America's top diplomat.

The attorney turned envoy tirelessly traveled to Bosnia and the Middle East on peace missions during his 1993-1996 tenure -- including some two dozen to Syria alone in a futile effort to promote a settlement with Israel.

After his work finished carrying out the Clinton administration agenda abroad, the longtime Californian returned home for an active life in local and national affairs and with his law firm.

Late Friday, the 85-year-old statesman died at his home in Los Angeles of complications from bladder and kidney cancer, said Sonja Steptoe of the law firm O'Melveny & Myers, where Christopher was a senior partner.

As he prepared to step down in 1996 as secretary "for someone else to pick up the baton," he said in an interview he was pleased to have played a role in making the United States safer.

Along with his peace efforts, he told The Associated Press that his proudest accomplishments included playing a role in promoting a ban on nuclear weapons tests and extension of curbs on proliferation of weapons technology.

The loyal Democrat also supervised the contested Florida recount for Al Gore in the 2000 presidential election. The Supreme Court, on a 5-4 vote, decided for George W. Bush.

While his efforts with Syria didn't bear fruit, he was more successful in the negotiations that produced a settlement in 1995 for Bosnia, ending a war among Muslims, Serbs and Croats that claimed 260,000 lives and drove another 1.8 million people from their homes.

Some critics said the administration had moved too slowly against the ethnic violence. Then-Rep. Frank McCloskey, an Indiana Democrat, called for Christopher's resignation and virtually accused the administration of ignoring genocide against Bosnian Muslims. A handful of State Department officials resigned in protest.

While Christopher often preferred a behind-the-scenes role, he also made news as deputy secretary of state in the Carter administration, conducting the tedious negotiations that gained the release in 1981 of 52 American hostages in Iran.

President Jimmy Carter awarded him the Presidential Medal of Freedom, the nation's highest civilian award. "The best public servant I ever knew," Carter wrote in his memoirs.

In private life, Christopher also served. Among many other things, he chaired a commission that proposed reforms of the Los Angeles Police Department in the aftermath of the videotaped beating by police of motorist Rodney King in 1991. When four officers arrested for beating King were acquitted of most charges the following year Los Angeles erupted in days of deadly rioting.

"The department not only failed to deal with the problem group of officers but it often rewarded them with positive evaluations and promotions," according to the report.

Numerous reforms were eventually put in place, including limiting the police chief to two five-year terms and having the chief appointed and supervised by a civilian commission.

Christopher's calm intervention amid political turmoil prompted the Republicans to turn to an elder statesman of their own, James A. Baker III, to represent Bush in the election dispute.

As Clinton considered a successor, Christopher offered the criteria he would apply if the choice was up to him.

His travels became the stuff of diplomatic legend.

In the skies over Africa and approaching his 71st birthday in October 1996, Christopher set a new mark for miles traveled by a secretary of state over four years, the normal length of a presidential term: 704,487.

The crew on his Air Force jet presented him with a congratulatory cake.

Christopher overcame sleep deprivation, difficult negotiations with the likes of the late Syrian President Hafez Assad and nagging ulcers to keep his eye on American interests.

Always crisp, modest and polite, he drove home an agreement in his last year on the job to halt fighting in Lebanon between Israel and extremist Shiite guerrillas.

"We have achieved the goal of our mission, which was to achieve an agreement that will save lives and end the suffering of people on both sides of the Israeli-Lebanese border," Christopher said in Jerusalem, his weeklong mission a success.

Madeleine Albright stepped in for Clinton's second term and Christopher returned to his law firm of O'Melveny & Myers with Clinton's "deep gratitude" for his service and with president's playful description of Christopher as "the only man ever to eat M&Ms on Air Force One with a fork."

Unlike some who held the job, Christopher worked smoothly with the president's other senior advisers.

Although critics complained that the Clinton administration's foreign policy lacked dramatic initiatives, the poised and cautious Christopher indicated he was pleased with the results, especially with what he called the "triple play" of a NAFTA trade agreement with Canada and Mexico, the APEC expansion of U.S. economic ties to Pacific Rim nations, and the GATT accord on international tariffs and trade.

"Taking it overall, we've done very well on the major issues," he said at a news conference in 1993, during which he also cited U.S. support for economic and political reform in Russia and the "partnership for peace" proposal to expand the involvement of former Communist adversaries in the North Atlantic Treaty Organization.

Christopher also looked back with gratitude on how far he had come from a childhood in Scranton, N.D., marked by bitter winters and modest circumstances. His father was a bank cashier who fell ill, and the family moved to Southern California during the Depression. After his father's death his mother supported the family of five children as a sales clerk.

An ensign in the U.S. Navy reserves, he was called up to active duty during World War II and served in the Pacific.

He received his undergraduate degree from the University of Southern California in 1945 and, after attending Stanford Law School, served as a clerk to Supreme Court Justice William O. Douglas in 1949 and 1950.

In the late 1960s, he was a deputy attorney general in the administration of Lyndon Johnson.

In 2008, Christopher was co-chairman of a bipartisan panel that studied the recurring question of who under U.S. law should decide when the country goes to war. It proposed that the president be required to inform Congress of any plans to engage in "significant armed conflict" lasting longer than a week.

As a successful Los Angeles lawyer, Christopher had a seven-figure income, and a beach house in fashionable Santa Barbara.

He is survived by his wife Marie, and had four children in two marriages: Lynn, Scott, Thomas, and Kristen. Plans were pending for a private memorial service.