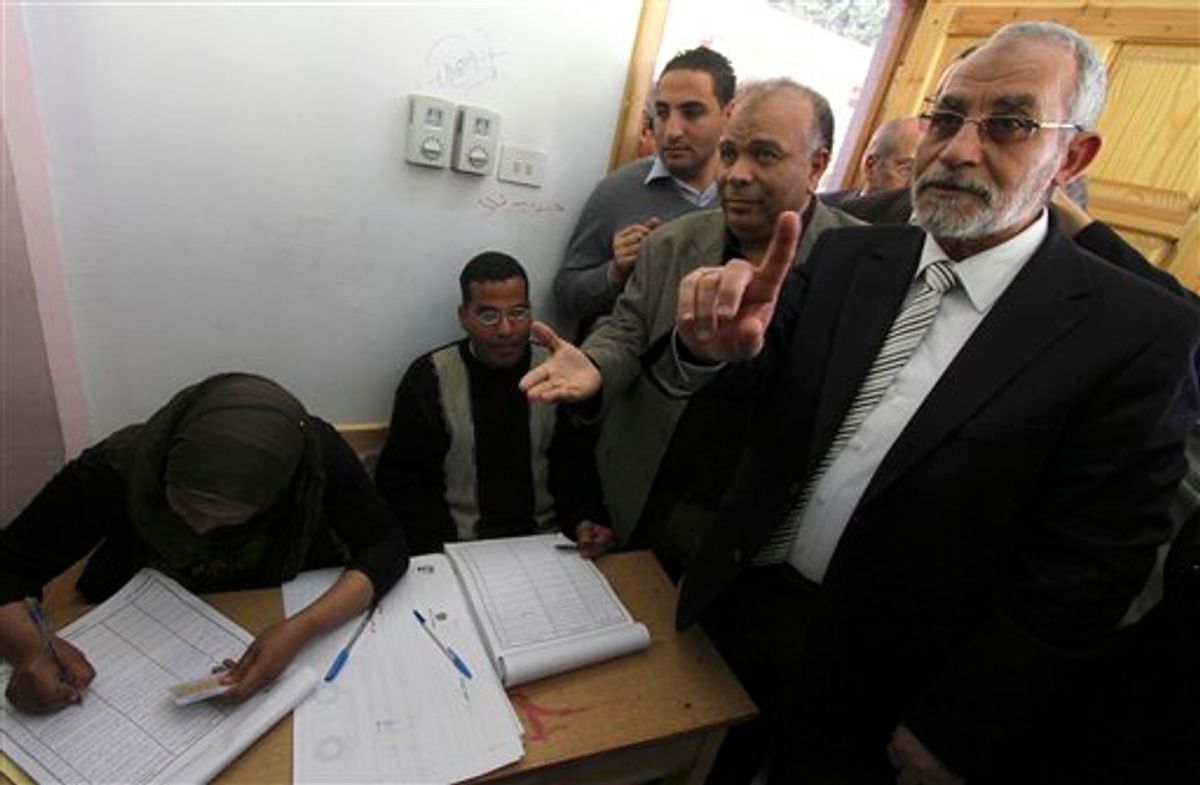 The elections commission chief says constitutional changes were approved in Egypt's landmark referendum, with 77 percent of the vote in favor according to final results.

The changes eliminate restrictions on political rights and open the way for parliamentary and presidential elections within months. Opponents argued that the timeframe was too quick for political parties to organize. Egypt's best organized political forces -- the Muslim Brotherhood and members of the former ruling party -- campaigned for passage.

Opponents feared the referendum's passage would allow the highly organized Muslim Brotherhood to dominate Egypt's dozens of new political parties in the presidential and parliamentary vote.

The partial, preliminary results also showed 70 percent turnout at many polling centers, a massive showing after decades of political apathy in response to repression.

Millions of Egyptians voted freely on Saturday for the first time in more than half a century, joyfully waiting for hours to cast their ballots on the package of constitutional changes.

Young people traded mobile-phone pictures of ink-stained fingers that showed they voted. Others called relatives to boast of casting the first vote of their lives. In the well-off Cairo neighborhood of Maadi, a man hoisted his elderly, infirm father on his shoulder and carried him to a polling station.

The first test of Egypt's transition to democracy offered ominous hints of widening sectarian division, however.

Many were drawn to the polls in a massive, last-minute effort by the Muslim Brotherhood, the most coherent political organization after the widely despised National Democratic Party of former President Hosni Mubarak, who was ousted last month in a national popular uprising.

Critics say that would allow the Brotherhood and NDP to easily outpoll the dozens of political groups born out of the anti-Mubarak uprising, dividing power between former regime loyalists and supporters of a fundamentalist state -- a nightmare scenario for both Western powers and many inside Egypt.

Among those most fearful of the Brotherhood's rising power are Egypt's estimated 8 million Coptic Christians, whose leaders rallied the faithful to vote "no."

The NDP is blamed for the rampant corruption and the fraud that marred every election during Mubarak's 29-year rule, and its members have been accused of attempting to disrupt Egypt's transition to democracy for fear of losing further power.

The constitutional amendments were drawn up by a panel of military-appointed legal scholars and intended to bring just enough change to the current constitution -- which was adopted in 1971 and suspended by the military after it came to power -- to ensure that upcoming presidential and parliamentary elections are free and fair.

In an interview with daily El-Shorouk, a top member of the Supreme Council of the Armed Forces said that the council will issue "a constitutional declaration" right after the announcement of the final vote to lay down next steps.

He said that if the referendum was approved, a timetable will be set for parliament and presidential elections. If the majority voted no, the armed forces might remain in power for up to two years.

Voters were asked to choose 'yes' or 'no' for the whole package of nine changes, which would also impose presidential term limits and curtail 30-year-old emergency laws that give police near-unlimited powers.

Ninety percent of voters in the province of Fayoum were in favor of the constitutional changes, while 60 percent in el-Wadi el-Gedid voted no.

On Saturday, reform campaigner Mohamed ElBaradei and a group of his supporters were pelted with rocks, bottles and cans outside a polling center at Cairo's Mokattam district in an attack he blamed on followers of the old regime.

Hundreds of Egyptians formed lines outside polling centers before they opened. They snaked along the streets in Cairo and other cities, with men and women standing in separate lines as is customary in the conservative and mainly Muslim nation.

Saturday's vote was by far the freest since the military seized power in a 1952 coup, toppling the monarchy and ending decades of a multiparty system that functioned while Britain was Egypt's colonial master. Only men with military backgrounds have ruled Egypt since.

While Mubarak's overthrow has left Egyptians euphoric about their newfound freedoms, many are also worried about the social tensions and instability that could spiral in the wake of the autocratic leader's departure.

Christian-Muslim clashes this month left at least 13 killed and more than 100 wounded in the worst sectarian clashes in years. On Jan. 1, a suicide bomber blew himself up outside a church in the Mediterranean port city of Alexandria, killing at least 22 worshippers and wounding scores. A few days later, a policeman shot dead an elderly Christian man on a train.

The Brotherhood, which has strongly campaigned for the adoption of the changes, advocates the installment of an Islamic government in Egypt. The ambivalence of its position on what role women and minority Christians play under their hoped-for Islamic government -- like whether they could run for president or be judges -- worry large segments of society.

In the province of Luxor, thousands of Brotherhood supporters and Salafis, zealous adherents to practices from Islam's early days, held separate demonstrations in the city center to campaign for a "yes" vote.

Churches handed out fliers to worshippers calling on them to vote "no."

To the north in the province of Assiut, home to one of the country's largest Christian communities, priests organized buses to ferry worshippers from churches to polling centers to cast their "no" vote. Islamists using loudspeakers in pickup trucks roaming Assiut's streets were calling on voters to cast "yes" ballots.

The attack on ElBaradei, the former head of the U.N. nuclear watchdog agency, forced him to flee in an SUV without casting his ballot. The crowd also smashed the car windows and shouted, "You traitor. We don't want you." ElBaradei supporters at the scene countered by chanting"we want you."

The Nobel laureate later tweeted that "organized thugs" were to blame for the attack. In a second Twitter posting, he said Mubarak regime figures were seeking to undermine the revolution, a reference to the Jan. 25-Feb. 11 uprising.

More than half of Egypt's 80 million people are eligible voters. The military, in a bid to get the vote out, has decreed that they would be allowed to cast ballots at any polling center in the country with their national ID cards the only required proof of identity. They were required to dip their index finger in ink after voting to prevent multiple balloting.