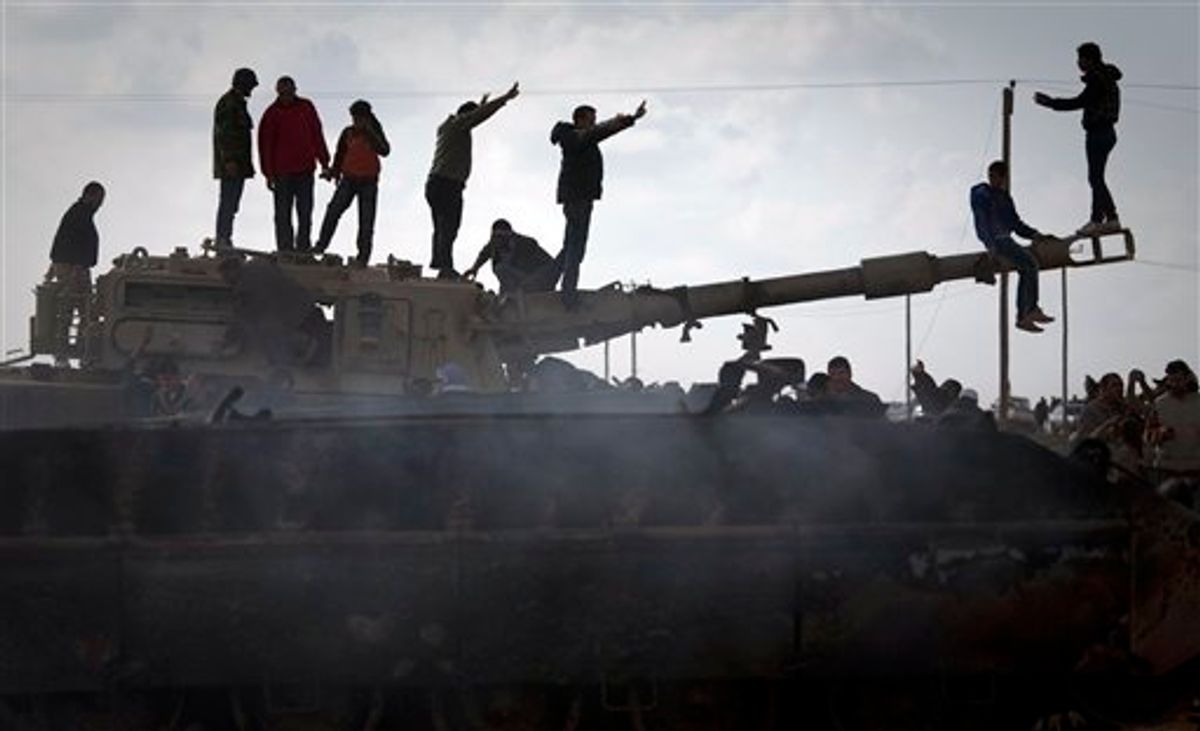 Libyan people celebrate on a tank belonging to the forces of Moammar Gadhafi in the outskirts of Benghazi, eastern Libya, Sunday, March 20, 2011. The tanks were destroyed earlier by NATO plans. (AP Photo/Anja Niedringhaus) (AP)
--

Residents of the rebel stronghold of Benghazi on Sunday fired AK-47s in jubilation and danced on burnt-out tanks that appeared to have been destroyed by allied airstrikes.

The celebrations marked a dramatic swing from the fear that gripped the city of nearly 700,000 a day earlier, when Libyan dictator Moammar Gadhafi's forces pounded the city with artillery and tank shells and punched through the outskirts of Benghazi in fierce street fighting.

After weeks of ceding territory to government troops, the rebels' successful defense, coupled with French and U.S. airstrikes on Gadhafi's forces overnight, gave the city -- and its defenders -- a newfound swagger.

"I feel like in two days max we will destroy Gadhafi," said Ezzeldin Helwani, 35, standing next to the smoldering wreckage of an armored personnel carrier, the air thick with smoke and the pungent smell of burning rubber.

Mohammed Faraj, a 44-year-old rebel fighter manning a checkpoint, said the rebels were now ready for anything from Gadhafi.

"Our spirits are very high," said Faraj, a grenade in each hand. "Me and all of Benghazi, we will die before Gadhafi sets foot here again."

Some 12 miles (20 kilometers) south down the road, the charred remains of seven government tanks, many with their turrets blown off, lay in a dusty field along with two armored personnel carriers, apparently hit by an allied airstrike overnight.

Hundreds of men roamed the site, climbing atop the tanks and snapping photographs with their cell phones. Shredded blankets, torn foam mattresses and empty cans of tomato paste littered the field. A goat head with a cigarette stuck in its mouth hung from the barrel of one of the tanks.

Along the tree-lined road into Benghazi, buildings riddled with pockmarks and burnt-out cars, buses and tanks gave testimony to the ferocity of the fighting that hit the city a day earlier.

"Yesterday was a catastrophe," said Salwa el-Daghili, a member of the opposition national council that governs rebel-held territory. "Today, there is hope -- you can see it on the streets."

Some of the roadblocks that had been hastily thrown across Benghazi's roads on Saturday had been pushed aside Sunday to make way for the traffic that moved smoothly through the streets. While anti-aircraft guns remained on almost every corner, the young men who had taken up positions on the streets with homemade firebombs on Saturday were gone.

Most stores remained shuttered, although several butcher shops and vegetable vendors were open for business, and men crowded into corner stores to stock up on cigarettes. Long lines of cars curling around the corner could be seen at gas stations still stocked with fuel.

While Benghazi residents breathed a collective sigh of relief after the onslaught, worries remain about how the conflict with Gadhafi will play out, as do lingering fears that the Libyan leader's loyalists within the city will strike.

"Some people are still being assassinated," said Saad Radwan, the manager of a gas station in central Benghazi. "The women are afraid, the kids are afraid."

Even that, however, couldn't temper the joy over the allied airstrikes that many here said came just in time.

"We are grateful to the U.S. and France for what they have done," he said.