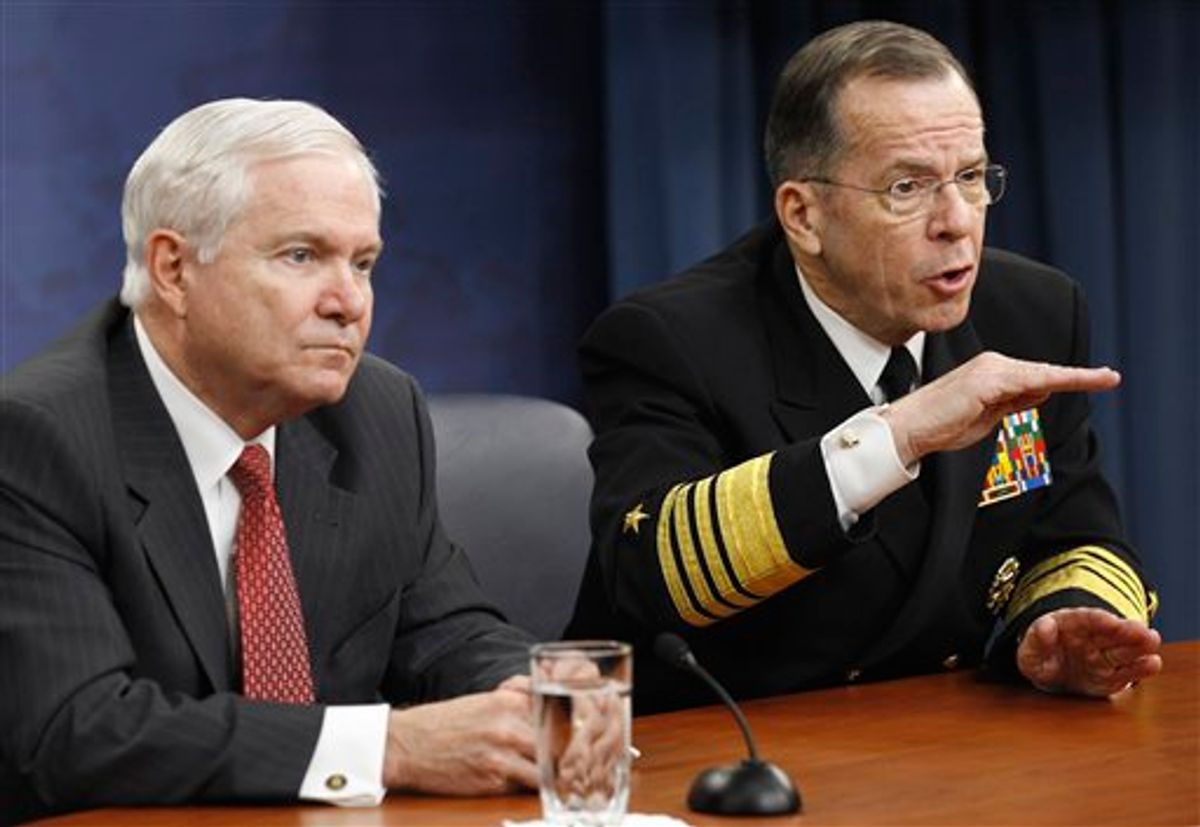 The U.S.-led international military assault on Libya could achieve its stated goals without forcing Moammar Gadhafi from power, the top U.S. military officer said Sunday as the bombing campaign continued.

Adm. Mike Mullen, chairman of the Joint Chiefs of Staffs, described the campaign's aims as "limited" saying it "isn't about seeing him (Gadhafi) go." Appearing on NBC's "Meet the Press," Mullen was asked whether it was possible that the mission's goals could be achieved while leaving Gadafi in power.

Pressed on this point later in an interview on CNN's "State of the Union," Mullen was more vague. "How this ends from the political standpoint, I just can't say," Mullen said. He said it was too early to speculate.

U.S. officials said at the outset of the missile strikes on Saturday that the goals are to prevent Gadhafi from inflicting further violence on his own people and to degrade his military's ability to contest a no-fly zone. Mullen said Sunday that the no-fly zone was now in place, with Gadhafi having put no aircraft in the sky.

Mullen said he thinks Gadhafi is more isolated than ever as a result of the no-fly zone and an arms embargo. He said the Libyan leader is "going to have to make some choices about his own future" at some point.

Mullen also said he hasn't seen any reports of civilian casualties as a result of the coalition's military operation and that Gadhafi has resorted to using human shields in an attempt to prevent further attacks.

American officials are eager to confirm that damage from the multi-stage air campaign has been extensive enough to allow air patrols to protect civilians being targeted by Gadhafi.

Military officials said that as Sunday dawned in Libya, satellites would give commanders a better view of the expected destruction along the country's coastline. U.S. and British ships launched the first phase of the missile assault, raining 112 Tomahawk cruise missiles onto more than 20 radar systems, communications centers and surface-to-air missile sites.

While the U.S. was leading the initial onslaught, officials made it clear that America would quickly step back into a supporting role and shift command to its European and Arab partners.

"Leading it now, we're looking to hand off that leadership in the next few days," Mullen said. "This is a military operation, so that's got to be done smoothly."

President Barack Obama, in Brazil for a five-day Latin America visit, made clear the U.S. reluctance to take on another war.

"This is not an outcome the U.S. or any of our partners sought," Obama said. But, he said he was convinced it was necessary to save the lives of civilians, particularly in and around the rebel stronghold of Benghazi. He added: "We cannot stand idly by when a tyrant tells his people there will be no mercy."

Defense Secretary Robert Gates had planned to fly to Russia on Saturday but delayed his departure for a day so that he could be in Washington to monitor the operation's launch.

He said it would take six to 12 hours to assess the damage, and if the main targets -- Libya's SA-5 surface-to-air missiles -- were taken out, then it would be safe to send an unmanned Global Hawk surveillance drone to get a better picture of the area.

Libya's overall air defenses are based on older Soviet technology but Gortney called them capable and a potential threat to allied aircraft.

Cruise missiles are the weapon of first choice in such campaigns; they do not put pilots at risk, and they use navigational technologies that provide good precision.

The first Tomahawk cruise missiles struck at 3 p.m. EDT, Gortney said, after a one-hour flight from the U.S. and British vessels on station in the Mediterranean.

The U.S. has at least 11 naval vessels in the Mediterranean, including three submarines, two destroyers, two amphibious warfare ships and the USS Mount Whitney, a command-and-control vessel that is the flagship of the Navy's 6th Fleet. Also in the area are Navy P-3 and EP-3 surveillance aircraft, officials said.

Gates was skeptical of getting involved in Libya's civil war, telling Congress this month that taking out Libya's air defenses was tantamount to war. Others have worried that the mission could put the U.S. on a slippery slope to deeper involvement in yet another Muslim country -- on top of the wars in Iraq and Afghanistan.

Hours after Secretary of State Hillary Rodham Clinton attended an international conference in Paris that endorsed military action against Gadhafi, the U.S. and Britain kicked off their attacks. Clinton said Gadhafi had left the world no choice but to intervene urgently and forcefully to protect further loss of civilian life.