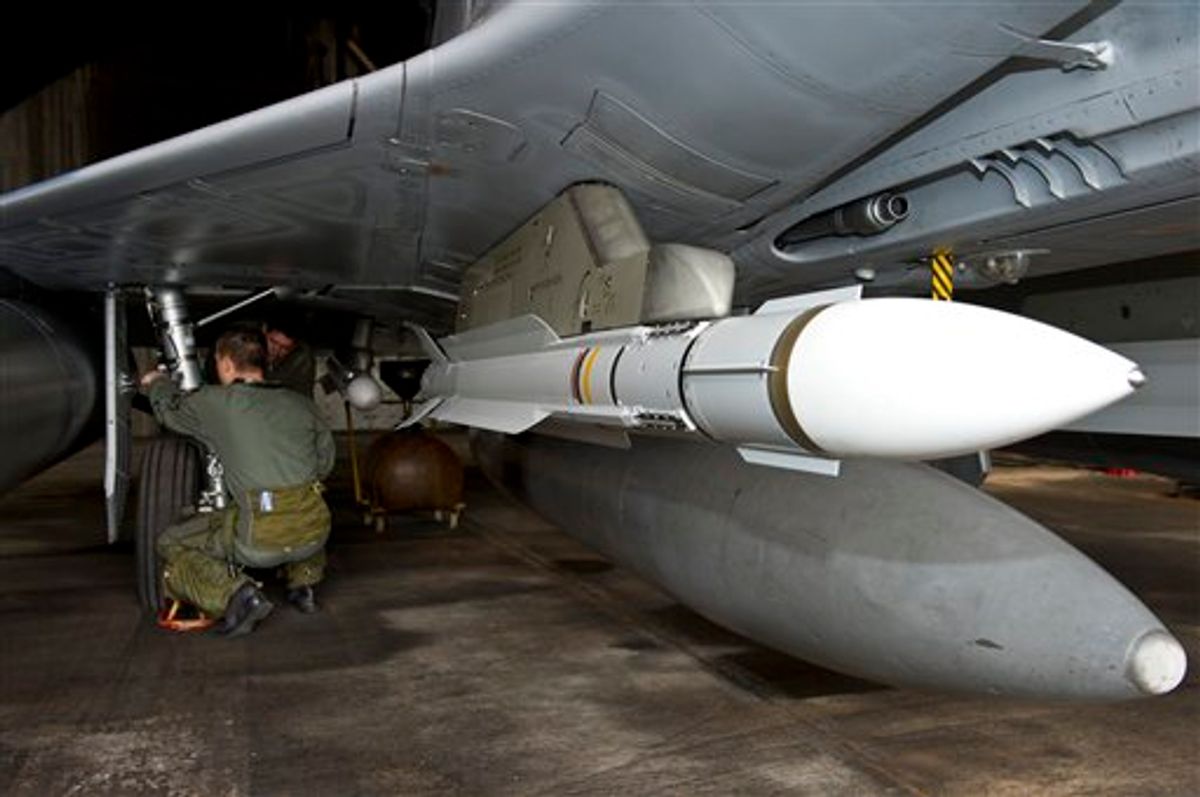 This photo provided by the French Army shows a pilot checking a French Mirage 2000 jet fighter at the military base of Dijon, central France, Saturday, March 19, 2011. Top officials from the United States, Europe and the Arab world have launched immediate military action to protect civilians as Libyan leader Moammar Gadhafi's forces attacked the heart of the country's rebel uprising. The Mirages 2000 are operating in Libya. (AP Photo/ Anthony Jeuland; SIRPA AIR) NO SALES (AP)
--

The U.S. and European nations targeted Moammar Gadhafi's forces with airstrikes and dozens of cruise missiles, shaking the Libyan capital with explosions and the sound of gunfire early Sunday in the broadest international military effort since the Iraq war. Libyan state TV claimed 48 people died in the attacks, but the report could not be independently verified.

The longtime Libyan leader vowed to defend his country from what he called "crusader aggression" and warned the involvement of international forces will subject the Mediterranean and North African region to danger and put civilians at risk.

President Barack Obama said military action was not his first choice and reiterated that he would not send American ground troops.

Explosions rocked the coastal cities, including Tripoli, where anti-aircraft guns could be heard firing overnight.

Libyan TV quoted the armed forces command as saying 48 people were killed and 150 wounded in the allied assault. It said most of the casualties were children but gave no more details.

The International Committee of the Red Cross said it was "deeply concerned" about civilians and called on all sides work to distinguish between civilians and fighters and allow safe access for humanitarian organizations.

Gadhafi, who has ruled Libya for 41 years, said in a telephone call to Libyan state TV that he was opening weapons depots to allow his people to arm themselves in defense.

He said the international action against his forces was unjustified, calling it "simply a colonial crusader aggression that may ignite another large-scale crusader war."

His regime acted quickly in the run-up to the strikes, sending warplanes, tanks and troops into the eastern city of Benghazi, the rebel capital and first city to fall to the rebellion that began Feb. 15. Then the government attacks appeared to go silent.

Operation Odyssey Dawn, as the allied assault has been dubbed, followed an emergency summit in Paris during which the 22 leaders and top officials agreed to do everything necessary to make Gadhafi respect a U.N. Security Council resolution Thursday calling for the no-fly zone and demanding a cease-fire, French President Nicolas Sarkozy said.

Navy Vice Adm. William E. Gortney, director of the Pentagon's Joint Staff, told reporters in Washington that U.S. ships and a British submarine had launched the first phase of a missile assault on Libyan air defenses.

Gortney said the mission has two goals: prevent further attacks by Libyan forces on rebels and civilians, and degrade the Libyan military's ability to contest a no-fly zone.

Defense officials cautioned it was too early to fully gauge the impact of the onslaught. But a senior defense official, who spoke on condition of anonymity because the mission was ongoing, said the Americans felt that Libya's air defenses had been heavily damaged given the precision targeting of the cruise missiles.

Mohammed Ali, a spokesman for the exiled opposition group the Libyan Salvation Front, said the Libyan air force headquarters at the Mateiga air base in eastern Tripoli and the Aviation Academy in Misrata had been targeted.

"All our planes have returned to base tonight," he said, and denied a Libyan TV report that a French plane had been hit.

The U.S. has struck Libya before. Former President Reagan launched U.S. airstrikes on Libya in 1986 after a bombing at a Berlin disco -- which the U.S. blamed on Libya -- that killed three people, including two American soldiers. The airstrikes killed about 100 people in Libya, including Gadhafi's young adopted daughter at his Tripoli compound.

The rebels said earlier that they had hoped for more, sooner from the international community, after a day when crashing shells shook the buildings of Benghazi and Gadhafi's tanks rumbled through the university campus.

"People are disappointed, they haven't seen any action yet. The leadership understands some of the difficulties with procedures but when it comes to procedures versus human lives the choice is clear," said Essam Gheriani, a spokesman for the opposition. "People on the streets are saying where are the international forces? Is the international community waiting for the same crimes to be perpetrated on Benghazi has have been done by Gadhafi in the other cities?"

Saturday's fighting galvanized the people of Benghazi, with young men collecting bottles to make gasoline bombs. Some residents dragged bed frames and metal scraps into the streets to make roadblocks.