I wanted a tan, but I wound up in a hospital 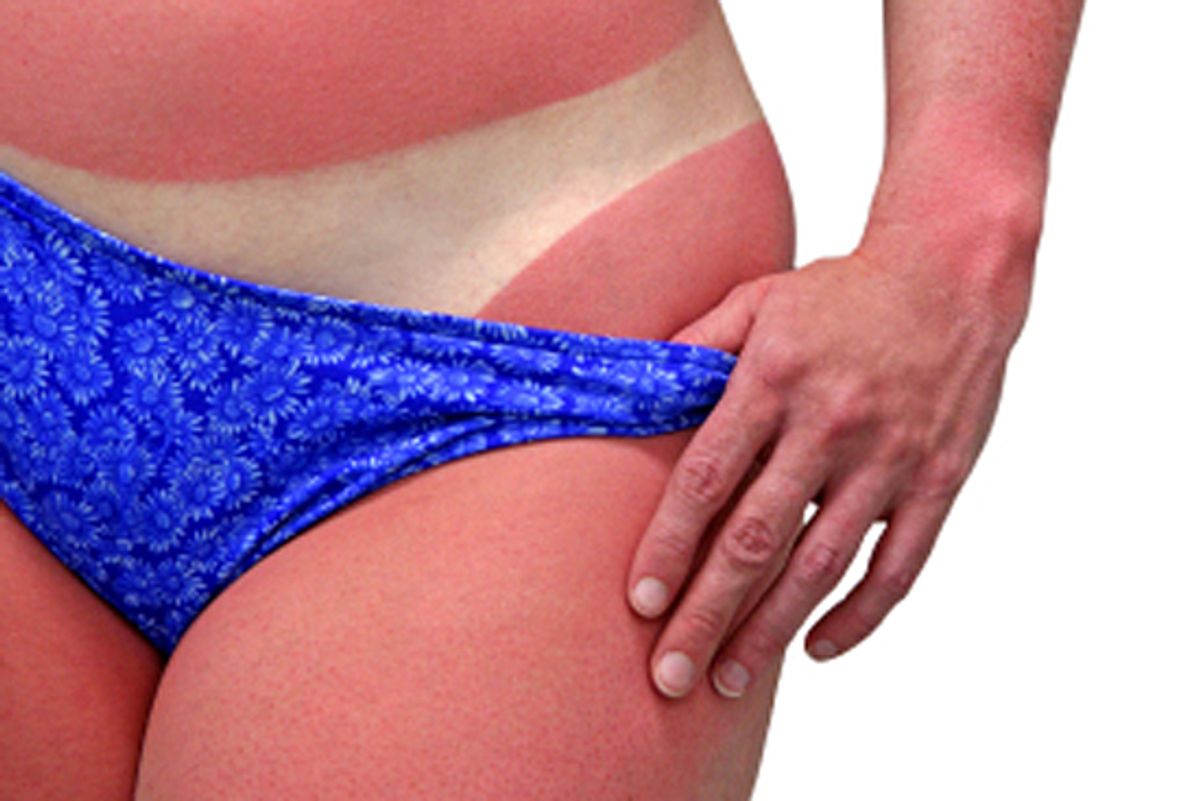 A woman's body with a bad case of sunburn. Isolated on white background and includes clipping path.
--

Baños, Ecuador, a balmy village of waterfalls and thermal springs poised on the neck of the massive Tungurahua volcano, is the type of lush South American hamlet that makes tourists and travel writers swoon. Normally, I'd be thrilled to be there, but instead, I was half-conscious with pain. I was lying on an exam table in the town's medical clinic, my skirt hitched to my thighs. A nurse was pricking and then cleaning with alcohol each member of a colony of blisters sprouting across my legs. Baños was supposed to be my first way station on a trek into the Amazon rain forest. Thanks to what I'd later find out were second-degree burns on my legs, it became my last stop.

I was living in Quito as part of my university's study abroad program, conducting anthropological fieldwork for my senior thesis. A few days before, I had accompanied my host family to its relatives' ranch just outside the city. The place had a pool, and the cloudy sky convinced me it was the perfect day to coax my pale skin to gently brown, no sunscreen needed. Quito rises about 9,000 feet above sea level. At this elevation, the atmosphere is thinner, making skin more vulnerable to the sun's rays. I knew this, but convinced myself the clouds in the sky would temper the intensity of the sun. So I stretched out next to the pool with a Toni Morrison novel, rising four hours later with legs the color of smoked salmon.

As my skin is fair with pink undertones, all my previous sunbathing efforts had resulted in some shade of red blooming across my skin. Self-tanners left me orange and streaky. Yet I kept striving for the miracle day when I would achieve the bronze glow that I first imagined in middle school would transform me into a popular girl. These were the girls who came back from summer vacation with tan lines peeking out from their tank tops and scoop-necked shirts. They glided through the hallways in Guess jeans and slow-danced with boys at Friday night dances. Later, in high school, I'd sneak pining glances at their faces, appearing in the passenger-side mirrors of their football-king boyfriends' cars, as I trudged to the school bus.

I came of age in the late '80s, when Cindy Crawford and Demi Moore ruled the magazine rack. Even when the '90s introduced us to such outliers as Gillian Anderson or Julianne Moore, I didn't have the luminous skin tone or glossy red hair. If I didn't already know my sallow skin and mousy brown hair were a defect, numerous department store cosmeticians and beauty salon employees reminded me. I was forever being asked, "Have you thought about getting some color?"

Then I went to Ecuador, where almost everyone is of mixed Spanish and indigenous ancestry, with brown eyes, thick, glossy black hair and olive skin. Like many young and naive anthropology students out in the field for the first time, I fell in love with the beauty of the people. That racial blending could produce such gorgeous human beings seemed a potent correction to my culture's blond-hair-and-blue-eyes ideal. But I also envied the Ecuadorans. Looks-wise, they were everything I was not.

I was surprised when, shortly after my arrival, Diana, my 15-year-old host sister, complimented me on my "good skin." This is what she called it. "Good skin." At first, I thought she was referring to my lack of acne. But then she ran her hand through my hair and said, "Good hair, too." She grabbed a chunk of her own hair and made a face. At first, I figured this to be typical teen-girl self-criticism. But eventually I realized it was much more common.

Ecuador had plenty of its own image complexes. Skin-lightening cream got top billing on pharmacy shelves, and billboards advertising everything from cigarettes to public health messages depicted smiling gringos, as though puffing on a Kool or practicing family planning would transform you into a tall blonde from Minneapolis. Matinee idols were mostly American movie stars. Of course, Ecuadorians are not alone in aspiring to gringo beauty ideals. This ethnic anxiety is played out in most Latin American countries, the legacy of a colonial caste system based on race, with people of "pure" European ancestry at the top and those of indigenous or African heritage at the bottom. To me, the most notorious example of this was Xuxa, the Brazilian singer and actress with the second-best-selling album in the history of Brazil. Xuxa could double for the Danish actress Brigitte Nielsen, yet she presides over millions of fans in a country where almost half the citizens are of mixed African, Amerindian and European ancestry.

I wasn't thinking about this as I took the bus ride from Quito to Baños, though. I was just hoping that after all of the pain I was going through with this sunburn -- for the first three days, I couldn't walk at all and now dime-size blisters were sprouting up and down my legs -- my skin would be charred enough to fade from pink to brown. This time it would work, and soon I'd be strolling under the Amazonian canopy, my bronze skin signaling my entrance into a better world.

The bus suddenly lurched forward, causing my right leg to bump the scratchy surface of the seat in front of me. One of the blisters tore open, leaking burning fluid down my leg. Its sting convinced me that this was serious. I needed medical attention.

In Baños, I headed straight to the medical clinic, my mind speeding through the grimmest possible outcomes, from cancer to amputation. The waiting room was packed, mostly with young, exhausted-looking women and their numerous children. A lot of the kids had the telltale potbellies of a parasitic infection, common in Ecuador and other developing nations. Others, when they opened their mouths to talk or laugh, displayed thrush, another everyday ailment here. Meanwhile, my blisters were growing; they were now the size of quarters.

In a tiny examination room, a young woman in a nurse's uniform greeted me. Her skin was the exact shade of caramel I yearned for, and her shoulder-length hair was cut to feather subtly around her face, which was almost perfectly round, save for high cheekbones. She was strikingly beautiful, except for her hair color. It was the strained yellow of a botched bleach job.

I lifted my skirt to my thighs, displaying my blisters and explaining in Spanish what had happened. The nurse sucked in her breath and made a little clicking sound, shaking her head. "We'll need to pop the blisters and disinfect them," she said. "Then you need to go back to Quito and go to the hospital. This looks like a second-degree burn." She took out a bottle of alcohol, a needle and some cotton balls.

With that, she got to work. I whimpered, and tears brimmed up in my eyes. Over and over I felt the sting of the needle, then the feeling of fire crawling down my legs as the fluid dribbled out, then the sting of the alcohol on open wounds, which felt like a thousand needle points battering my skin.

The pain alone was enough for me to swear never again to go near a beach, tanning salon or remote mountaintop in the Andes. But it was the comment from the nurse, as she finished her task, which made me realize the insanity of what I had done. Screwing the cap back on the bottle of alcohol, she said, "What a pity. You had such good skin."

Sarah Stanfield is a writer based in Jackson Heights, Queens, New York. She has written about everything from the botánicas of her neighborhood to an elegy for the broadcast engineers killed in the 9/11 attacks.