The HBO's drama's series finale was big, clumsy and bloody -- and worth watching twice 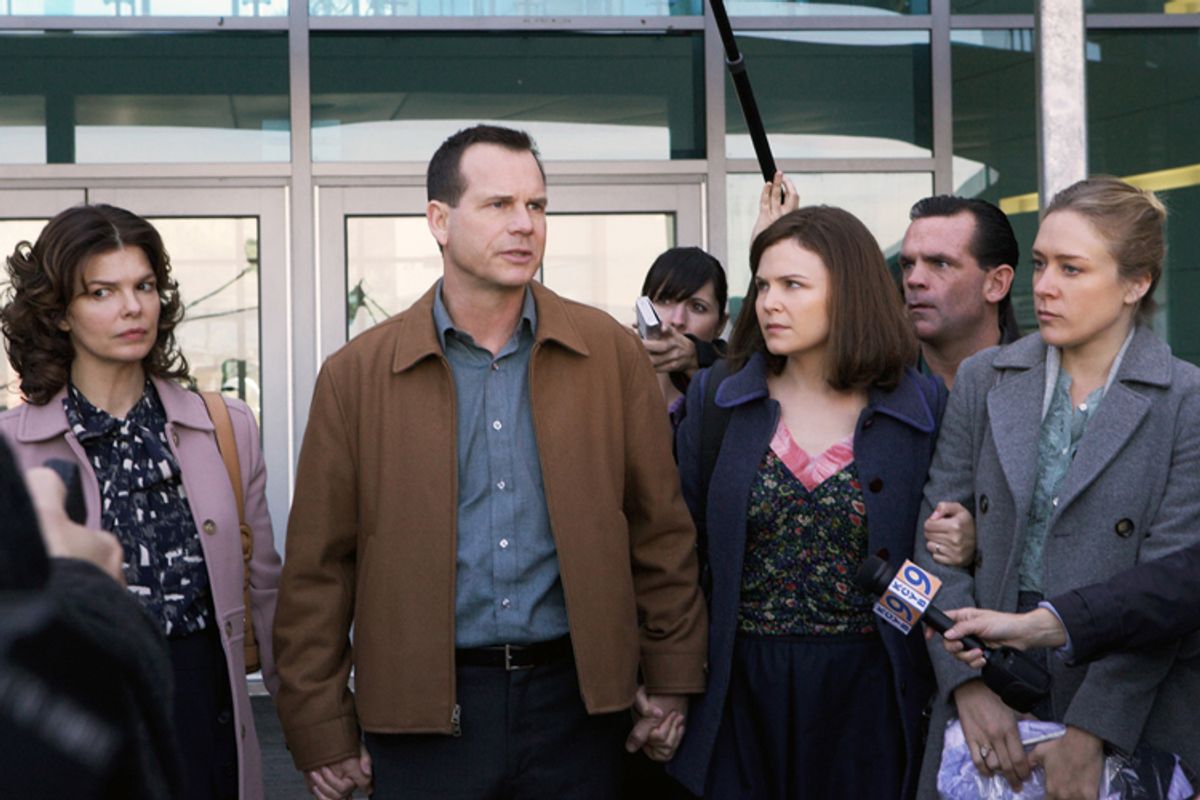 I should know by now that when I watch a series finale twice to decide whether I liked it, it means I liked it. The finale of HBO's "Big Love" demanded a second viewing.  The last episode of the drama's fifth season was overstuffed, rushed and brazenly melodramatic, tying off subplots lickety-split, as if working its way down a checklist. And its last 15 minutes built toward a wannabe "one for the ages" climax -- a shocking twist that reordered the hour, the season and the show, forcing viewers to view everything that came before in a fresh context. Was the power of that ending justified? Or was it a shortcut to catharsis, wringing emotions through sudden trauma that should have been built to more meticulously and thoughtfully? (And here I go now, writing "Spoiler alert"; if you haven't seen the last episode, why are you even reading this?)

I think it was justified. It's not as though "Big Love" has spent the last five seasons politely avoiding an excess of incident or emotion. Like another HBO domestic drama, "Six Feet Under" -- a series "Big Love" doesn't resemble at all, except in its belief in a world beyond this one -- it deals in open-ended metaphors and big events, and embroiders them with little moments of recognizable feeling. And it's not as though there were no warning signs. On TV -- as in films and plays and novels -- a major character's death almost never arrives out of the blue. There's almost always a buildup: a succession of scenes that shows the character unwittingly untangling knots in his major relationships, and either setting things right or apologizing for his inability to do so. You get that gnawing feeling in the pit of your stomach when an episode starts gearing up for this kind of ending, and when the moment arrives, you're nearly always a step ahead of the soon-to-be-deceased character. (When Bill's neighbor flagged him down before he was about to go pick up his mother and launched into a whiny-verging-on-hysterical tirade about Bill resodding his lawn without asking him, you just knew something grim was about to happen.) Then you look back over the drama's final chapter and think either, "I saw this coming" or "I should have seen this coming." And if the series plays fair (as this one did) you don't feel blindsided or condescended to.

As series creator Mark V. Olsen told TVLine, "“What could be the most important testament to the life that that character has lived on the planet Earth?” And it’s not that he had two hardware stores. And it’s not that he had a casino. It’s that he created a family that endured." For an outwardly inflexible man, Bill Henrickson (Bill Paxton) has proved himself quite adaptable over the last five seasons -- especially in this one. In the finale he stretched so dramatically that he became a bendable Mormon action figure. He was besieged on all sides by reminders that his patriarchal authority was either waning or finally being recognized as fragile, maybe illusory. His wives Barb (Jeanne Tripplehorn), Nicki (Chloë Sevigny) and Margene (Ginnifer Goodwin) had spent much of the season going their own way, coming up with big ideas on the spur of the moment and executing them without consulting Bill, or even each other.

Nicki had a few doozies along those lines, including her push to marry Bill so that he could legally protect her daughter Cara Lynn (Cassi Thomson), and her torpedoing Cara Lynn's relationship with her much older math teacher -- a relationship with incidental echoes of the statutory rape charges that dogged Bill, not to mention the sexual manipulation that Nicki endured in the compound.  (The scene where Barb makes Nicki sit on the bed and accept a sisterly/maternal hug was so moving that I wish the editors had let it breathe rather than quickly cutting away.)  Margie, at first the series' most naive and dependent spouse, came to seem like another Barb in the making, planning to go on a social activist cruise to South America and leave her kids at home. Barb, arguably the most independent-minded of the show's major characters, had several such epiphanies/calls to action. The most obvious were her aborted near-baptism in a more liberal church that would have let her be a priest, and her purchase of a new car (replacing the damaged station wagon that Bill, in a too-on-the-nose scene between them, said was an analog for their relationship -- and perhaps for his relationship with all three of his wives). "You'll be a chipped plate, a second class citizen," Bill warned her. "You'll be ashamed of your church for being intolerant of us, and resentful of us for holding you back."

But in his dying moments, Bill accepted the legitimacy of the wishes that drove Barb to that church, asked her for a blessing, and effectively ceded his patriarchal authority to a woman -- and in the series' last scene we saw Barb almost a year later dressed in a red suit, the unofficial uniform of American women in politics. I like how Bill eventually came to terms with all of these events, and how he made peace with what the rest of the world would consider catastrophic defeats: the politically motivated destruction of his store; the state Senate's stonewalling of his crusade to delegitimize the compounds, and its incredulity when he turned the hearings into a referendum on polygamy. All these events (and others in earlier seasons) made rhetorical and structural sense even when episodes or whole seasons were creaky and the show got lost in its contrivances.

A friend recently joked, "Remember when their biggest conflict was over a credit card bill?"  I do -- but when I look back on those early days, the show's evolution seems defensible, even fitting. What we've seen over time is a move from the private into the public sphere -- from invisibility to visibility. The Henricksons and their "plural marriage" started out as a private thing, something that mainstream Latter Day Saints and non-LDS citizens could choose to overlook or ignore. But over time, the skulduggery in the compounds and Bill's financial and political ambitions brought it all into the light and forced the rest of the state to confront it.  Although some readers clearly loathe this aspect of the series, the (very loose) analogy between plural marriage and homosexuality came through quite strongly in Season 5 -- especially in "mainstream" society's hostile reaction to Bill's bid to legitimize polygamy, or at least force Utah to acknowledge that it exists, and has been at the center of the state's history for a century-and-a-half. I've got no problem with how you live your life, the mainstream loves to tell people like the Henricksons, as long as you're not rubbing it in my face. Which translates as, "Stay in the shadows, freak -- I'd rather not contemplate your existence."  Bill's speech on the Senate floor with his wives serving as chorus was his uptight straight guy version of a Harvey Milk moment -- and it paid off in that unexpectedly huge church meeting that perhaps marked the birth of a movement.

But in the end, this series has always been less about political analogies than personal relationships -- specifically the intense but uneasy interaction between women and men in a still male-dominated society. Like so many HBO series ("The Sopranos" most of all) this one put an unsettling new frame around familiar, very basic conflicts, in a way that pushed viewers to consider their essence. To quote my friend Lisa Rosman, the show "underscored what I've always thought about relationships: that what goes on between two people has nothing and everything to do with anyone else at any given moment." The relationship between Bill, Barb, Nicki and Margene can be read as a metaphor for this, that and the other thing; yet at the same time, it is what it is, and nothing more. I love stories that reject "either/or" thinking and embrace "both/and" instead, and "Big Love" was absolutely one of those stories. It reimagined the component parts of a monogamous relationship by fracturing them into facets and distributing them among four major characters -- and it did it within one of the most unabashedly spiritual frameworks in network TV history. Even when the series got lost in its own often-tangled and distracting subplots, it never relinquished its distinctive viewpoint on religious people living in an increasingly secular nation -- a viewpoint that was detached and matter-of-fact but never cold or doubting. We always got the sense that there was a world beyond the one we were looking at, and that everything that happened in this world was affected by, and leading toward, that other existence. Margene's final change of direction in the kitchen -- heading for the door, then turning in slow-motion for one more embrace; Bill visible at the table behind his wives, out-of-focus but unmistakably there -- was a knockout, and consistent with the series' style and tone over the years.

Most of all, I love that final image, with its echoes of the crane-shot-through-the-glass in "Citizen Kane" and the soul ascension at the end of "Easy Rider" -- swing for the fences, "Big Love," why don't you! -- and the way it revisited the series' original theme song, the Beach Boys' "God Only Knows," in a cover by the Dixie Chicks' Natalie Maines. You could read the song's lyrics from five or six different angles: God only knows what Bill will do without his wives, and what Barb and Nicki and Margene and all Bill's friends and enemies and colleagues will do without him. The shot's quasi-omniscient point-of-view also merged Bill with the God he invoked so often, complicated or obliterated the idea of God having a gender, and made "God Only Knows" sound like a loving, vaguely sheepish apology: the Heavenly Father (or Mother) as easily distracted, inconsistent patriarch (or matriarch).  The first thing you hear in the very first episode of "Big Love" is a man singing "God Only Knows," and the last thing you hear is a woman singing it. It all fits.

I'm going to miss this show.