The false defenders of Obama's war in Libya

Contrary to some bloggers, Congress didn't delegate its war powers to the U.N. 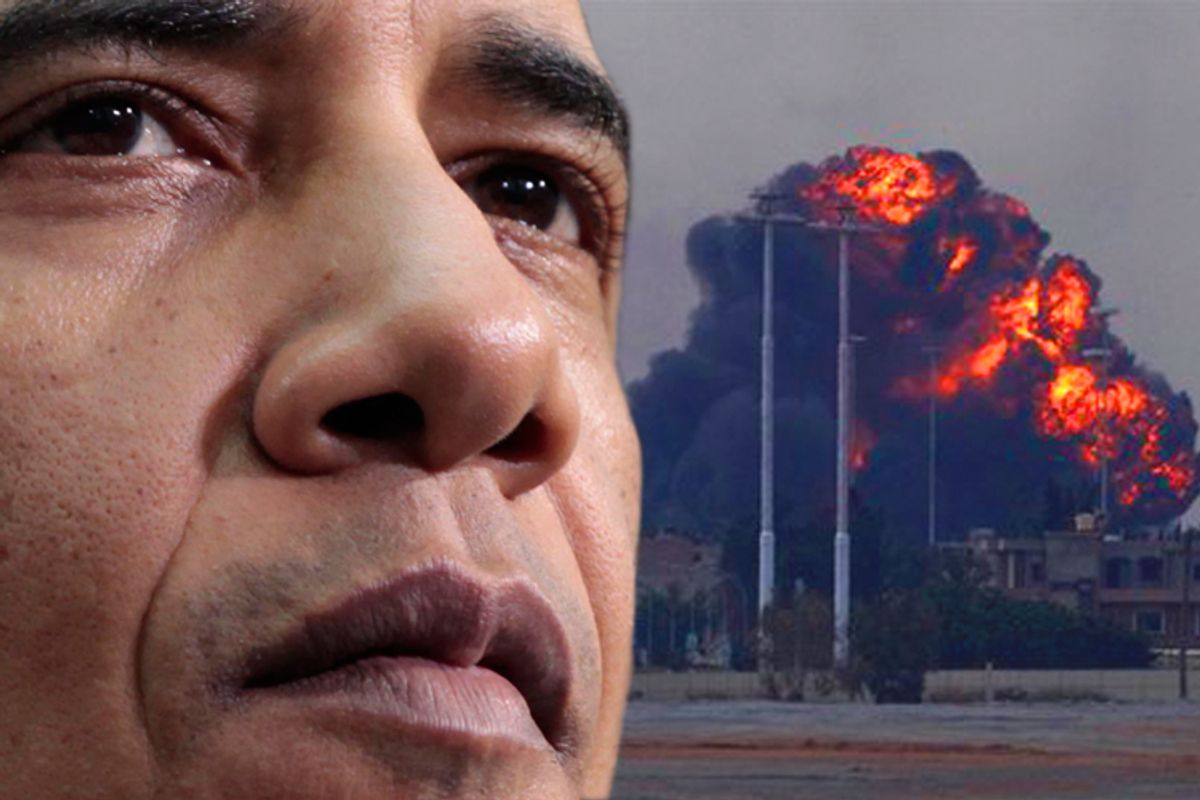 Did the U.S. Congress delegate the power to compel America to go to war to the United Nations in 1945? That is the startling claim that is being made by some who claim that President Obama's decision to launch a third American war in Libya in addition to the Iraq and Afghan wars is constitutional.

Another blogger writes: "You might also argue that the U.S. Constitution, under Article 1, Section 8 grants congress the exclusive right to make war. But subsequent law, embodied in Title 22 above, obviously override this with respect to treaties and agreements already signed into law (i.e. the UN charter)."

Others are also making this sophistical argument.

Before we address the erroneous notion that Congress, by statute, can amend the U.S. Constitution, let us examine the relevant articles of the U.N. Charter and then the language of the United Nations Participation Act, which grants the president limited authority to comply with Security Council requests without congressional authorization.

First, the relevant articles of Chapter VII of the U.N. Charter:

The Security Council may decide what measures not involving the use of armed force are to be employed to give effect to its decisions, and it may call upon the Members of the United Nations to apply such measures. These may include complete or partial interruption of economic relations and of rail, sea, air, postal, telegraphic, radio, and other means of communication, and the severance of diplomatic relations. (emphasis added).

Should the Security Council consider that measures provided for in Article 41 would be inadequate or have proved to be inadequate, it may take such action by air, sea, or land forces as may be necessary to maintain or restore international peace and security. Such action may include demonstrations, blockade, and other operations by air, sea, or land forces of Members of the United Nations.

All Members of the United Nations, in order to contribute to the maintenance of international peace and security, undertake to make available to the Security Council, on its call and in accordance with a special agreement or agreements, armed forces, assistance, and facilities, including rights of passage, necessary for the purpose of maintaining international peace and security. (emphasis added).

Article 43 was based on the idea that the U.N. would have its own armed forces, to be sent into battle by a "military staff committee." No nation, including the U.S., ever negotiated the required agreements, however, so Article 43 has always been a dead letter and should be ignored.

That leaves the question of what the president can and cannot do without congressional authorization in response to Security Council requests under Articles 41 and 42. The controlling authority is the U.N. Participation Act passed by Congress in 1945. Here is what U.S. Code Title 22, Chapter 7, Subchapter XVI, section 287d says:

Use of armed forces; limitations -- The President is authorized to negotiate a special agreement or agreements with the Security Council which shall be subject to the approval of the Congress by appropriate Act or joint resolution, providing for the numbers and types of armed forces, their degree of readiness and general location, and the nature of facilities and assistance, including rights of passage, to be made available to the Security Council on its call for the purpose of maintaining international peace and security in accordance with article 43 of said Charter.

The first paragraph merely authorizes the president to negotiate an agreement to supply standing forces with the U.N. under Article 43. As no such Article 43 agreement exists, the whole paragraph is irrelevant.

Note that even if such an Article 43 agreement were constitutional, Congress would have to approve of it "by appropriate Act or joint resolution" before the president’s agreement to supply U.S. armed forces to the U.N. would have the force of law. The U.N. Participation Act, by its own language, is not sufficient to grant the president of the United States authority to negotiate the provision of military forces to the U.N., without a subsequent act of congressional approval.

What about the second paragraph?

"The President shall not be deemed to require the authorization of Congress to make available to the Security Council on its call in order to take action under article 42 of said Charter and pursuant to such special agreement or agreements the armed forces, facilities, or assistance provided for therein ..." (emphasis added)

Let us read the rest of the paragraph:

Provided, That, except as authorized in section 287d–1 of this title, nothing herein contained shall be construed as an authorization to the President by the Congress to make available to the Security Council for such purpose armed forces, facilities, or assistance in addition to the forces, facilities, and assistance provided for in such special agreement or agreements.

"Provided" should get our attention. It is a road bump, telling us to pay careful attention to what comes next. And what comes next is the warning that the law does not permit the president to "make available to the Security Council for such purpose armed forces, facilities, or assistance" in addition to those in the (nonexistent) Article 43 forces.

There is one solitary exception to the ban on the president providing armed forces to enforce a Security Council resolution, without congressional approval and outside of the context of an Article 43 agreement that Congress has ratified. That exception is found in section 287d-1, "Noncombatant assistance to the United Nations," which reads:

Notwithstanding the provisions of any other law, the President, upon the request by the United Nations for cooperative action, and to the extent that he finds that it is consistent with the national interest to comply with such request, may authorize, in support of such activities of the United Nations as are specifically directed to the peaceful settlement of disputes and not involving the employment of armed forces contemplated by chapter VII of the United Nations Charter --

(1) the detail to the United Nations, under such terms and conditions as the President shall determine, of personnel of the armed forces of the United States to serve as observers, guards, or in any non-combatant capacity, but in no event shall more than a total of one thousand of such personnel be so detailed at any one time ... (emphasis added)

One commentary on the UNPA notes:

The UNPA emerged from Congress with considerable optimism and with relative swiftness. According to the House report accompanying the bill, it was intended to "prescribe the domestic, internal arrangements within [the U.S.] Government for giving effect to [U.S.] participation in [the United Nations] and [to] set up the machinery whereby [U.S.] national authorities can comply with certain of the major international commitments" assumed by the United States upon its ratification of the U.N. Charter. These commitments included the requirement that U.N. members comply in good faith with any Security Council decision under Article 41 to apply specified measures short of the use of armed force to implement Security Council decisions. (emphasis added).

The only rational way to interpret these sections of the UNPA is to read them as authorizing the president, without congressional approval, to supply fewer than a thousand noncombatant troops to the U.N. for Article 41 actions short of war, and also to negotiate agreements to supply armed forces to the U.N. under Article 43 -- but only with prior congressional approval. In Article 42 situations, like the situation in Libya, where the U.N. Security Council calls on members to go to war, the UNPA did not grant the president to act without congressional approval -- presumably because the Congress that passed the UNPA understood that all Article 42 enforcement actions approved by the Security Council would have to be separately and independently approved by congressional declarations of war before the U.S. could take part.

Far from delegating the president vast discretion to wage war in pursuit of U.N. requests, the U.N. Participation Act jealously guards the constitutional prerogatives of Congress.

But suppose that the UNPA had been worded differently, and had sought to empower the president to wage war without prior congressional authorization, as long as the U.N. Security Council approved. In that case, the UNPA would have been unconstitutional from the beginning. Even if it wants to, Congress cannot, by statute, amend the Constitution.

In addition to lodging the power to authorize wars with Congress, Article 1, Section 8 of the Constitution gives Congress the following powers:

To borrow money on the credit of the United States;

To regulate Commerce with foreign Nations, and among the several States, and with the Indian Tribes;

To establish an uniform Rule of Naturalization, and uniform Laws on the subject of Bankruptcies throughout the United States;

Suppose that Congress were to pass four laws -- one giving the IMF the power to borrow money on the credit of the United States; one delegating the power to negotiate U.S. trade treaties to the World Bank; a third giving the Organization of American States the authority to establish U.S. laws of citizenship and naturalization; and a fourth delegating the power to make bankruptcy law to the Organization for Economic Cooperation and Development. All four of those laws would be null and void, because Congress is not permitted to give its constitutional powers to another branch of the U.S. government or to foreign governmental or non-governmental entities.

People are free, if they wish, to propose a 28th Amendment to the U.S. Constitution that would read as follows: "The President of the United States shall have power to initiate war on his own authority, without the prior approval of Congress; provided, however, that Congress may refuse to appropriate funding for the continuation of a war the president has begun." Such an amendment would create the situation that many people falsely claim to be the case today. Until such an amendment is ratified and goes into effect, however, the law of the land remains what it has always been, and President Obama’s war in Libya, even if it is moral, prudent and legally authorized under international law by the Security Council, is plainly unconstitutional.