A history of Libya and blowback

Two years after Ronald Reagan ordered airstrikes on Tripoli in 1986, the Libyans orchestrated the Lockerbie bombing 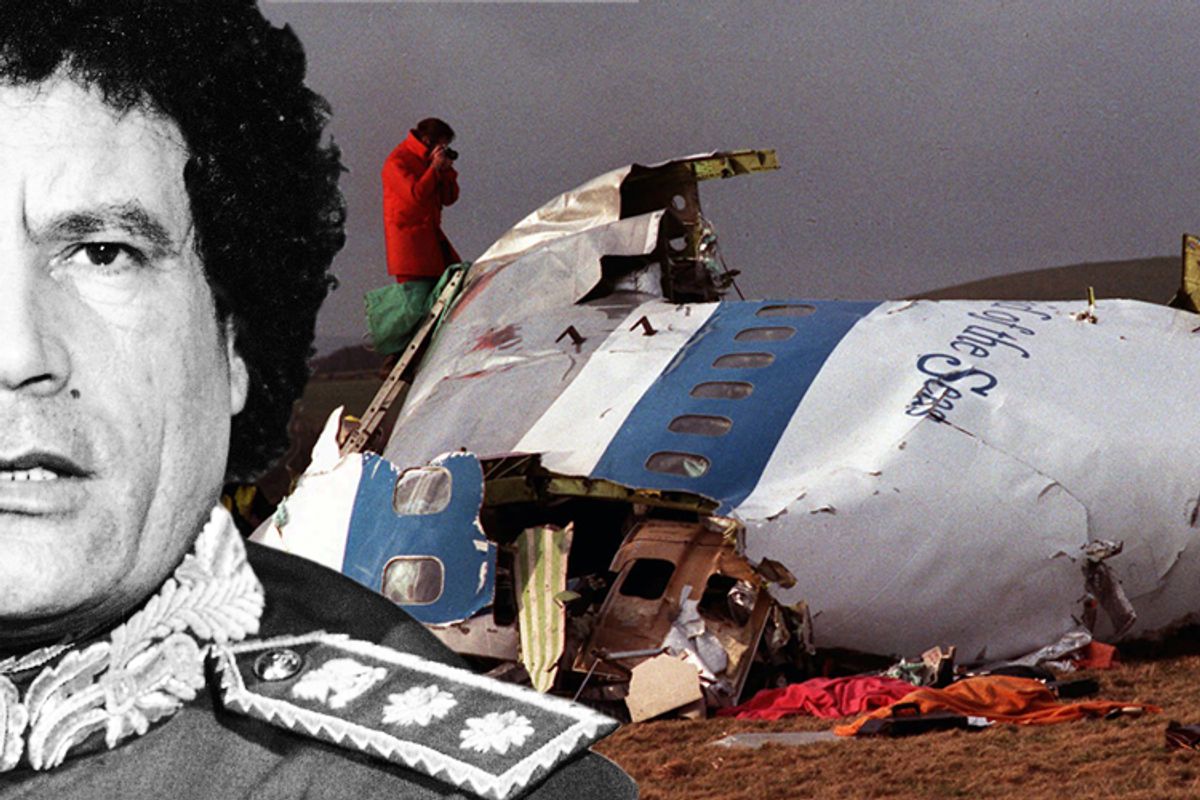 Moammar Gadhafi and wreckage from Pan Am flight 103
--

A fact that hasn't gotten much attention since the Obama administration started its bombing campaign in Libya is that we've been here before. President Ronald Reagan launched a bombing raid on Libya in 1986, known as Operation El Dorado Canyon.

That was a very different era -- one in which Moammar Gadhafi was an active sponsor of terrorism and had been demonized in the U.S. for years. There are, however, interesting parallels to today. The Obama administration, for example, has warned in recent days that Gadhafi may try to hit back at the U.S. or Europe by sponsoring acts of terrorism. In the 1980s, Gadhafi did just that. Reagan's strike on Libya was one of the key events in the run-up to the 1988 bombing of Pan Am Flight 103 over Lockerbie, Scotland.

The Lockerbie bombing killed 270 people. Among the many Americans killed was Matthew Gannon, a Beirut-based CIA officer. Libyan intelligence agent Abdelbaset al-Megrahi was ultimately convicted of masterminding the attack.

To learn more about the history of Operation El Dorado Canyon and Lockerbie, I spoke with William Beeman, a Middle East expert and anthropology professor at University of Minnesota. The text that follows has been edited for length and clarity.

Can you summarize the political context in the 1980s that led up to the American bombing in Libya in 1986?

Well, Col. Gadhafi was a very iconoclastic figure from the time he took power in 1969. He had been involved in supporting any number of terrorist organizations including the Irish Republican Army. In particular, he was very upset about the fact that anti-Gadhafi forces -- Libyan expatriates -- had been operating in Europe. In retaliation, he funded the IRA and he claimed that this was payback for the Europeans that were allegedly fostering opposition to his own government. Gadhafi also claimed to be sponsoring the Red Army Faction [in Germany] and was generally considered to be a terrible gadfly to Europeans and to the United States. He was quite equal opportunity; he also supported Idi Amin in Uganda, and he declared himself the king of kings of all of Africa. So the United States under Reagan declared Libya to be the chief state supporter of terrorism in the 1980s.

What prompted the American bombing in 1986?

The main thing that touched off the incident was the bombing of the La Belle nightclub in West Berlin in April 1986. There were a small number of people killed and a large number injured. The United States had an absolute smoking gun. The Libyan agents involved in the attack were operating out of East Germany. During the dregs of the Cold War, there was kind of a perfect storm -- East Germany and the communists were involved with the Libyans and they were bombing a nightclub in West Berlin. So the story was, "Evil Gadhafi and evil communists plot to bomb Westerners." Later on it turned out to be true that the Stasi had been involved, but we didn't know about this for a long time, until after the reunification of Germany. A week after the bombing, Reagan ordered the strike on Libya.

What happened in that strike?

In mid-April, U.S. jets attacked a number of sites in Libya including the presidential palace. The U.S. had planned a strike of this kind long before it actually took place, but it came as a big surprise for everybody. The Europeans actually resisted it. The U.S. was cooperating with Great Britain but France and Spain and Italy denied the U.S. overflight rights. So the U.S. started from Great Britain and flew down the coast and then through Gibraltar, which is British territory. They had to refuel in the air to make the flight. They dumped tens of tons of munitions on the airfield in Tripoli.

A dozen or so officers were killed in the raid but Gadhafi and his family escaped. The story is -- and we don't know this is true for sure -- that he was warned in advance by either the the prime minister of Malta or Prime Minister Craxi of Italy. After the raid, Gadhafi announced that he had won a military victory over the United States because they hadn't killed him. There were also a couple of Americans whose plane was shot down.

Didn't Gadhafi claim that his "adopted daughter" was killed in that attack?

That's right. She was called Hannah. But no one had ever heard of her. And every time the story was told about her, her age seemed to change -- from 12 months to 6 years, and various numbers in between. The fact that no one knew who she was and they couldn't get the facts straight about her existence really tells me that it may have been a fabricated story. There may have been somebody from the household killed and it may have been expeditious for Gadhafi to say, "This is my adopted daughter." It might have been a metaphorical relationship more than anything else.

So how did you get from the '86 attack to Lockerbie? Are the two events connected?

From the standpoint of the Libyans, the Lockerbie incident was retaliatory for the fact that the British had allowed the U.S. to fly this mission from Great Britain. A bomb was placed on the plane and it blew up in midair. There were 270 people killed. It was en route from Heathrow to the United States, so that was significant because the airstrikes in 1986 had been, in Gadhafi's view, a joint U.S.-British operation. But the Libyans denied for a long, long time that they had anything to do with the Lockerbie incident. A Libyan, Megrahi, was eventually convicted in Scottish court and was in jail for a long time. Now, just last month, the Libyan justice minister, Mustafa Abdel-Jalil, claimed that Gadhafi had personally ordered the Lockerbie attack. But Mustafa Abdel-Jalil is now one of the leaders of the opposition, so maybe that claim is not so surprising.

The Obama administration has said it is now on alert for some kind of Gadhafi-sponsored terrorist attempt. Do you see that as plausible?

Well, it's possible. But it's interesting that most of the Libyan delegations outside of Libya have now denounced the Gadhafi government. Clearly any groups that are loyal to Gadhafi outside of Libya cannot operate under the cover of the Communist state anymore. The United States more or less absolved Gadhafi during the Bush administration. We restored diplomatic relations in 2004. And just before the presidential election in 2008, the U.S. had a comprehensive Libyan claim settlement. The Libyans agreed to compensate the Lockerbie victims and the victims of the Germany bombing in 1986. And the U.S. more or less said, "We're going to wipe the slate clean."