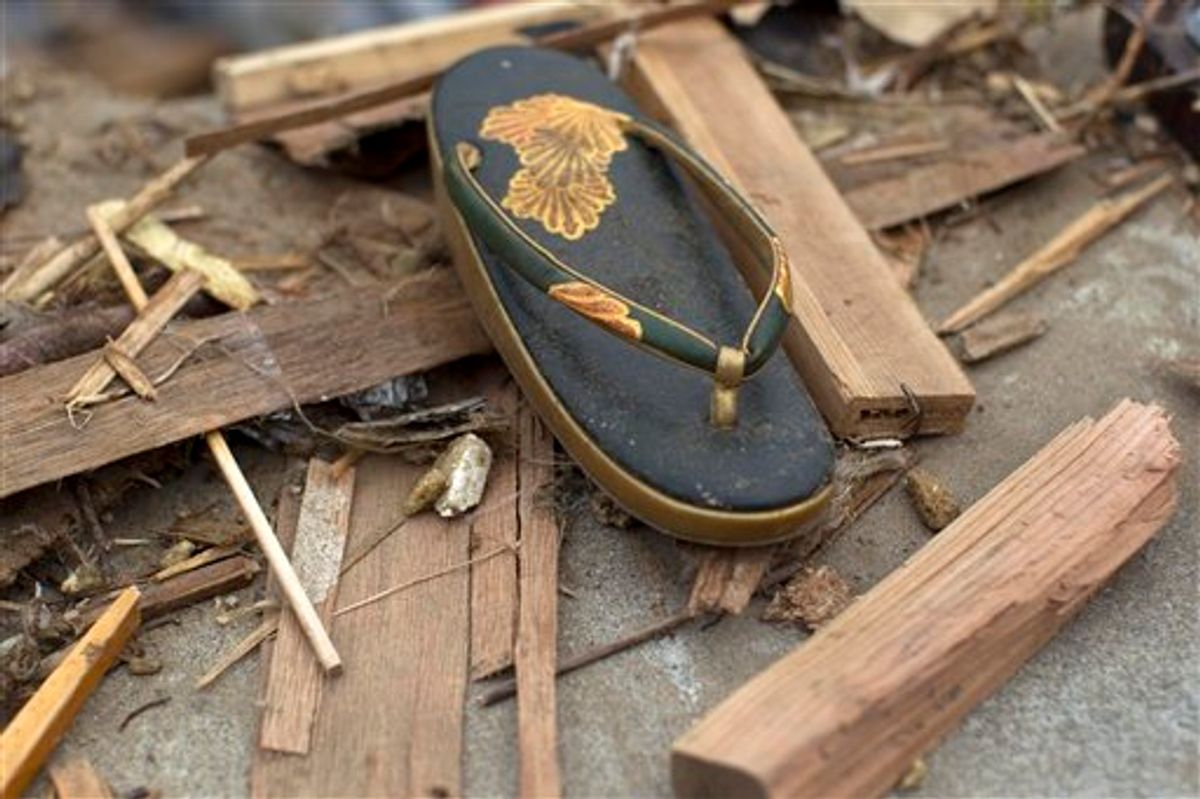 Japanese officials reported progress over the weekend in their battle to gain control over a nuclear complex that began leaking radiation after suffering quake and tsunami damage, though the crisis was far from over, with a dangerous new surge in pressure reported in one of the plant's six reactors.

The announcement by Japan's Health Ministry late Sunday that tests had detected excess amounts of radioactive elements on canola and chrysanthemum greens marked a low moment in a day that had been peppered with bits of positive news: First, a teenager and his grandmother were found alive nine days after being trapped in their earthquake-shattered home. Then, the operator of the overheated nuclear plant said two of the six reactor units were safely cooled down.

"We consider that now we have come to a situation where we are very close to getting the situation under control," Deputy Cabinet Secretary Tetsuro Fukuyama said.

Still, serious problems remained at the Fukushima Dai-ichi nuclear complex. Pressure unexpectedly rose in a third unit's reactor, meaning plant operators may need to deliberately release radioactive steam. That has only added to public anxiety over radiation that began leaking from the plant after a monstrous earthquake and tsunami devastated northeastern Japan on March 11 and left the plant unstable. As day broke Monday, Japan's military resumed dousing of the complex's troubled Unit 4.

The World Bank said in report Monday that Japan may need five years to rebuild from the catastrophic disasters, which caused up to $235 billion in damage, saying the cost to private insurers will be up to $33 billion and that the government will spend $12 billion on reconstruction in the current national budget and much more later.

The safety of food and water was of particular concern. The government halted shipments of spinach from one area and raw milk from another near the nuclear plant after tests found iodine exceeded safety limits. Tokyo's tap water, where iodine turned up Friday, now has cesium. Rain and dust are also tainted.

Early Monday , the Health Ministry advised Iitate, a village of 6,000 people about 30 kilometers (19 miles) northwest of the Fukushima plant, not to drink tap water due to elevated levels of iodine. Ministry spokesman Takayuki Matsuda said iodine three times the normal level was detected there -- about one twenty-sixth of the level of a chest X-ray in one liter of water.

In all cases, the government said the radiation levels were too small to pose an immediate health risk.

But Tsugumi Hasegawa was skeptical as she cared for her 4-year-old daughter at a shelter in a gymnasium crammed with 1,400 people about 80 kilometers (50 miles) from the plant.

"I still have no idea what the numbers they are giving about radiation levels mean. It's all so confusing," said Hasegawa, 29, from the small town of Futuba in the shadow of the nuclear complex. "And I wonder if they aren't playing down the dangers to keep us from panicking. I don't know who to trust."

All six of the nuclear complex's reactor units saw trouble after the disasters knocked out cooling systems. In a small advance, the plant's operator declared Units 5 and 6 -- the least troublesome -- under control after their nuclear fuel storage pools cooled to safe levels. Progress was made to reconnect two other units to the electric grid and in pumping seawater to cool another reactor and replenish it and a sixth reactor's storage pools.

But the buildup in pressure inside the vessel holding Unit 3's reactor presented some danger, forcing officials to consider venting. The tactic produced explosions of radioactive gas during the early days of the crisis.

"Even if certain things go smoothly, there would be twists and turns," Chief Cabinet Secretary Yukio Edano told reporters. "At the moment, we are not so optimistic that there will be a breakthrough."

Growing concerns about radiation add to the overwhelming chain of disasters Japan has struggled with since the 9.0-magnitude quake. The resulting tsunami ravaged the northeastern coast. All told, police estimates show more than about 18,400 died. More than 15,000 deaths are likely in Miyagi, the prefecture that took the full impact of the wave, said a police spokesman.

"It is very distressing as we recover more bodies day by days," said Hitoshi Sugawara, the spokesman.

Police in other parts of the disaster area declined to provide estimates, but confirmed about 3,400 deaths. Nationwide, official figures show the disasters killing more than 8,600 people, and leaving more than 13,200 people missing, but those two lists may have some overlap.

The disasters have displaced another 452,000, who are living in shelters.

Fuel, food and water remain scarce. The government in recent days acknowledged being caught ill-prepared by an enormous disaster that the prime minister has called the worst crisis since World War II.

Bodies are piling up in some of the devastated communities and badly decomposing even amid chilly rain and snow.

"The recent bodies -- we can't show them to the families. The faces have been purple, which means they are starting to decompose," says Shuji Horaguchi, a disaster relief official setting up a center to process the dead in Natori, on the outskirts of the tsunami-flattened city of Sendai. "Some we're finding now have been in the water for a long time, they're not in good shape. Crabs and fish have eaten parts."

Contamination of food and water compounds the government's difficulties, heightening the broader public's sense of dread about safety. Consumers in markets snapped up bottled water, shunned spinach from Ibaraki -- the prefecture where the tainted spinach was found -- and overall expressed concern about food safety.

Experts have said the amounts of iodine detected in milk, spinach and water pose no discernible risks to public health unless consumed in enormous quantities over a long time. Iodine breaks down quickly, after eight days, minimizing its harmfulness, unlike other radioactive isotopes such as cesium-137 or uranium-238, which remain in the environment for decades or longer.

High levels of iodine are linked to thyroid cancer, one of the least deadly cancers if treated. Cesium is a longer-lasting element that affects the whole body and raises cancer risk.

Rain forecast for the Fukushima area also could further localize the contamination, bringing the radiation to the ground closer to the plant.

Edano tried to reassure the public for a second day in a row. "If you eat it once, or twice, or even for several days, it's not just that it's not an immediate threat to health, it's that even in the future it is not a risk," Edano said. "Experts say there is no threat to human health."

No contamination has been reported in Japan's main food export -- seafood -- worth about $1.6 billion a year and less than 0.3 percent of its total exports.

Amid the anxiety, there were moments of joy on Sunday. An 80-year-old woman and her teenage grandson were rescued from their flattened two-story house after nine days, when the teen pulled himself to the roof and shouted to police for help.

Other survivors enjoyed smaller victories. Kiyoshi Hiratsuka and his family managed to pull his beloved Harley Davidson motorcycle from the rubble in their hometown of Onagawa. The 37-year-old mechanic said he knows it will never work anymore. "But I want to keep it as a memorial."