Even once emergency workers restore power flow to reactors, the danger is far from over 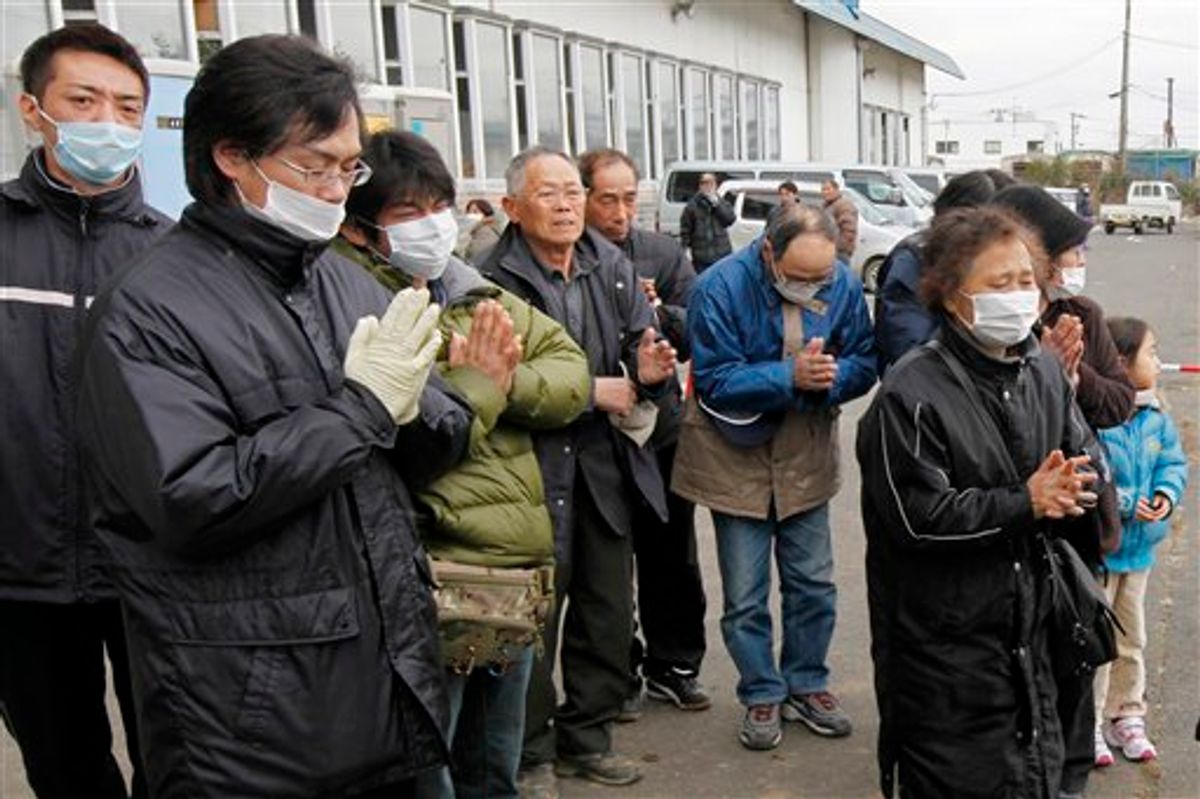 Residents pay their last respects to a victim as a van carrying the coffin leaves a temporary morgue at a bowling alley in Natori, Miyagi Prefecture Monday, March 21, 2011 as the death toll continues to rise following the March 11 earthquake and tsunami that devastated the northeast coast of Japan. (AP Photo/Mark Baker) (AP)
--

Officials raced Monday to restore electricity to Japan's leaking nuclear plant, but getting the power flowing will hardly be the end of their battle: With its mangled machinery and partly melted reactor cores, bringing the complex under control is a monstrous job.

Restoring the power to all six units at the tsunami-damaged complex is key, because it will, in theory, power up the maze of motors, valves and switches that help deliver cooling water to the overheated reactor cores and spent fuel pools that are leaking radiation.

Ideally, officials believe it should only take a day to get the Fukushima Dai-ichi nuclear under control once the cooling system is up and running. In reality, the effort to end the crisis is likely to take weeks.

Late Monday night, the deputy director general of Japan's nuclear safety body suggested to reporters why there is so much uncertainty about when the job will be finished.

"We have experienced a very huge disaster that has caused very large damage at a nuclear power generation plant on a scale that we had not expected," said Hidehiko Nishiyama of the Nuclear and Industrial Safety Agency.

The nuclear plant's cooling systems were wrecked by the massive earthquake and tsunami that devastated northeastern Japan on March 11. Since then, conditions at the plant have been volatile; a plume of smoke rose from two reactor units Monday, prompting workers to evacuate.

In another setback, the plant's operator said Monday it had just discovered that some of the cooling system's key pumps at the complex's troubled Unit 2 are no longer functional -- meaning replacements have to be brought in. Tokyo Electric Power Co. said it had placed emergency orders for new pumps, but how long it would take for them to arrive was unclear.

If officials can get the power turned on, get the replacement pumps working and get enough seawater into the reactors and spent fuel pools, it would only take a day to bring the temperatures back to a safe, cooling stage, said Ryohei Shiomi, an official with the Nuclear and Industrial Safety Agency.

"There is nothing else we can do but keep doing what we've been doing," Shiomi said.

In other words, officials would continue dousing the plant in seawater -- and hope for the best.

An official of the U.S. Nuclear Regulatory Commission said in Washington that Units 1, 2 and 3 have all seen damage to their reactor cores, but that containment is intact. The assessment dispels some concerns about Unit 2, where an explosion damaged a pressure-reducing chamber around the bottom of the reactor core.

"I would say optimistically that things appear to be on the verge of stabilizing," said Bill Borchardt, the commission's executive director for operations.

Monday's evacuation of workers from the plant came after smoke began rising from the spent fuel storage pool of the plant's problem-plagued Unit 3, Tokyo Electric spokesman Hiroshi Aizawa said. Unit 3 also alarmed plant officials over the weekend with a sudden surge of pressure in its reactor core.

What caused the smoke to billow first from Unit 3 and then from Unit 2 is under investigation, nuclear safety agency officials said. Still, in the days since the earthquake and tsunami, both reactors have overheated and seen explosions. Workers were evacuated from the area to buildings nearby, though radiation levels remained steady, the officials said.

Problems set off by the disasters have ranged far beyond the shattered northeast coast and the wrecked nuclear plant, handing the government what it has called Japan's worst crisis since World War II. Rebuilding may cost as much as $235 billion. Police estimate the death toll will surpass 18,000.

Traces of radiation are tainting vegetables and some water supplies, although in amounts the government and health experts say do not pose a risk to human health in the short term. That has caused the government to ban sale of raw milk, spinach and canola from prefectures over a swath from the plant toward Tokyo. The government has just started to test fish and shellfish.

Tokyo Electric said radioactive iodine about 127 times normal levels and radioactive cesium about 25 times above the norm were detected in seawater 100 meters (yards) off the Fukushima nuclear plant.

The Health Ministry has advised Iitate, a village of 6,000 people about 30 kilometers (19 miles) northwest of the plant, not to drink tap water due to elevated levels of iodine. Ministry spokesman Takayuki Matsuda said iodine three times the normal level was detected there -- about one twenty-sixth of the level of a chest X-ray in one liter of water.

"Please do not overreact, and act calmly," Chief Cabinet spokesman Yukio Edano said in the government's latest appeal to ease public concerns. "Even if you eat contaminated vegetables several times, it will not harm your health at all."

The World Health Organization said Japan will have to do more to reassure the public about food safety.

"Walking outside for a day and eating food repeatedly are two different things. This is why they're going to have to take some decisions quickly in Japan to shut down and stop food being used completely from zones which they feel might be affected," WHO spokesman Gregory Hartl said.

In a travel warning, the State Department offered potassium iodide to its staff in Japan as a precaution but advised its employees to refrain from taking the compound at this time. The government says it is making potassium iodide available "out of an abundance of caution" to its personnel and family members, and the compound should only be consumed after specific instruction from the U.S. government.

The troubles at Fukushima have in some ways overshadowed the natural catastrophe, threatening a wider disaster if the plant spews more concentrated forms of radiation than it has so far.

The nuclear safety agency and Tokyo Electric reported significant progress over the weekend and Monday. Electrical teams, having finished connecting three of the plant's six units, were working to connect the rest by Tuesday, the utility said.

Once done, however, pumps and other equipment have to be checked -- and the reactors cleared of dangerous gas -- before the power can be restored. For instance, a motorized pump to inject water into Unit 2's overheated reactor and spent fuel storage pool needs to be replaced, said Nishiyama, the official with NISA.

The World Bank said in a report Monday that Japan may need five years to rebuild from the disasters, which caused up to $235 billion in damage, saying the cost to private insurers will be up to $33 billion and that the government will spend $12 billion on reconstruction in the current national budget and much more later.

All told, police estimate around 18,400 people died from the 9.0-magnitude quake and tsunami. More than 15,000 deaths are likely in Miyagi, the prefecture that took the full impact of the wave, said a police spokesman.

Police in other parts of the disaster area declined to provide estimates, but confirmed about 3,400 deaths. Nationwide, official figures show the disasters killed more than 8,800 people and left more than 12,600 missing, but those two lists may have some overlap.

The disasters have displaced another 452,000, who are in shelters.