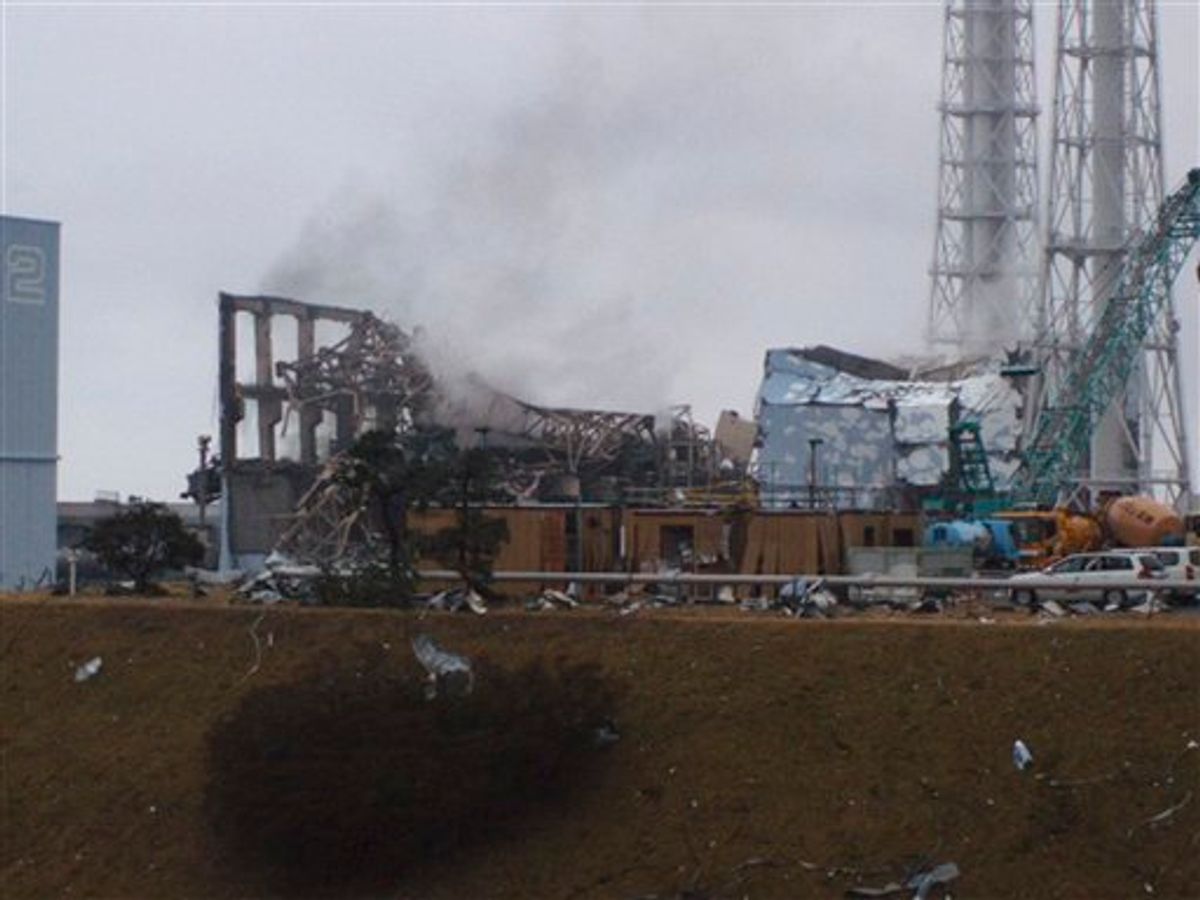 In this photo released by Tokyo Electric Power Co. (TEPCO), gray smoke rises from Unit 3 of the tsunami-stricken Fukushima Dai-ichi nuclear power plant in Okumamachi, Fukushima Prefecture, Japan, Monday, March 21, 2011. Official says the TEPCO temporarily evacuated its workers from the site. At left is Unit 2 and at right is Unit 4. (AP Photo/Tokyo Electric Power Co.) EDITORIAL USE ONLY (AP)
--

Workers are racing to bring the nuclear plant under control, but the process is proceeding in fits and starts, stalled by incidents like the smoke and by the need to work methodically to make sure wiring, pumps and other machinery can be safely switched on.

What caused the smoke to billow first from Unit 3 at the Fukushima Dai-ichi plant and later from Unit 2 is under investigation, nuclear safety agency officials said. Still, in the days since the March 11 earthquake and tsunami wrecked the plant's cooling systems, both reactors have overheated and seen explosions. Workers were evacuated from the area to buildings nearby, though radiation levels remained steady, the officials said.

Problems set off by the disasters have ranged far beyond the devastated northeast coast and the wrecked nuclear plant, handing the government what it has called Japan's worst crisis since World War II. Rebuilding the northeast coast may cost as much as $235 billion. Police estimate the death toll will surpass 18,000.

Traces of radiation are tainting vegetables and some water supplies, although in amounts the government and health experts say do not pose a risk to human health in the short-term.

"Please do not overreact, and act calmly," said Chief Cabinet spokesman Yukio Edano in the government's latest appeal to ease public concerns. "Even if you eat contaminated vegetables several times, it will not harm your health at all."

The troubles at Fukushima have in some ways overshadowed the natural catastrophe, threatening a wider disaster if the plant spews more concentrated forms of radiation than it has so far.

The nuclear safety agency and Tokyo Electric reported significant progress over the weekend and Monday. Electrical teams, having finished connecting three of the plant's six units, worked to connect the rest by Tuesday, the utility said.

Once done, however, pumps and other equipment have to be checked -- and the reactors cleared of dangerous gas -- before the power can be restored. For instance, a motorized pump to inject water into Unit 2's overheated reactor and spent fuel storage pool needs to be replaced, said Hidehiko Nishiyama, an official at the Nuclear and Industrial Safety Agency.

Early Monday, the Health Ministry advised Iitate, a village of 6,000 people about 30 kilometers (19 miles) northwest of the plant, not to drink tap water due to elevated levels of iodine. Ministry spokesman Takayuki Matsuda said iodine three times the normal level was detected there -- about one twenty-sixth of the level of a chest X-ray in one liter of water.

The World Bank said in a report Monday that Japan may need five years to rebuild from the disasters, which caused up to $235 billion in damage, saying the cost to private insurers will be up to $33 billion and that the government will spend $12 billion on reconstruction in the current national budget and much more later.

Growing concerns about radiation add to the chain of disasters Japan has struggled with since the 9.0-magnitude quake. The resulting tsunami ravaged the northeastern coast. All told, police estimates show more than about 18,400 died. More than 15,000 deaths are likely in Miyagi, the prefecture that took the full impact of the wave, said a police spokesman.

"It is very distressing as we recover more bodies day by day," said Hitoshi Sugawara, the spokesman.

Police in other parts of the disaster area declined to provide estimates, but confirmed about 3,400 deaths. Nationwide, official figures show the disasters killed more than 8,600 people, and leaving more than 13,200 missing, but those two lists may have some overlap.

The disasters have displaced another 452,000, who are in shelters.