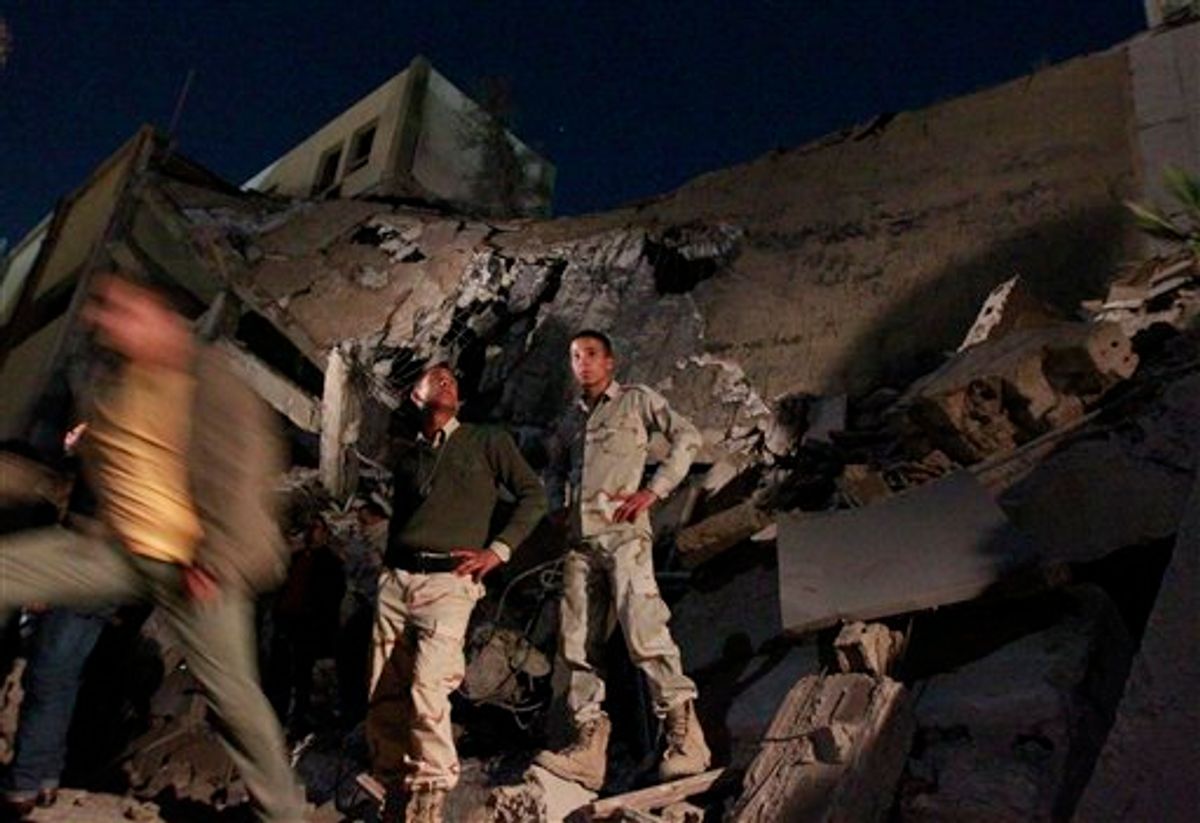 Libyan soldiers survey the damage to an administrative building hit by a missile late Sunday in the heart of Moammar Gadhafi's Bab Al Azizia compound in Tripoli, Libya, early Monday, March 21, 2011 as they are pictured during an organized trip by the Libyan authorities. (AP Photo/Jerome Delay) (AP)
--

A cruise missile blasted Moammar Gadhafi's residential compound in an attack that carried as much symbolism as military effect, and fighter jets destroyed a line of tanks moving on the rebel capital. The U.S. said the international assault would hit any government forces attacking the opposition.

Oil prices jumped to nearly $103 a barrel Monday in Asia after the Libyan leader vowed a "long war" amid a second night of allied strikes in the OPEC nation. Jubilant rebels said they expected to bring him down in a matter of days.

It was not known where Gadhafi was when the missile hit near his iconic tent late Sunday, but it seemed to show that while the allies trade nuances over whether the Libyan leader's fall is a goal of their campaign -- he is not safe.

Half of the round, three-story administration building was knocked down and pieces of the missile were scattered around, according to Associated Press photographer escorted to the scene by the Libyan government. About 300 Gadhafi supporters were in the compound at the time. It was not known if any were hurt.

Britain said Monday one of its bombing missions was aborted last night to avoid civilian casualties.

"We believe that a number of civilians had been moved within the intended target area," the Ministry of Defense said Monday. State television had said Gadhafi's supporters were converging on airports as human shields.

The U.S. military said the bombardment so far -- a rain of Tomahawk cruise missiles and precision bombs from American and European aircraft, including long-range stealth B-2 bombers -- had hobbled Gadhafi's air defenses. More missile strikes overnight did new damage to anti-aircraft sites, the Italian military said.

U.S., British and French planes also went after tanks headed toward Benghazi, in the opposition-held eastern half of the country. On Sunday, at least seven demolished tanks smoldered in a field 12 miles (20 kilometers) south of Benghazi, many of them with their turrets and treads blown off, alongside charred armored personnel carriers, jeeps and SUVs of the kind used by Gadhafi fighters.

"I feel like in two days max we will destroy Gadhafi," said Ezzeldin Helwani, 35, a rebel standing next to the smoldering wreckage of an armored personnel carrier, the air thick with smoke and the pungent smell of burning rubber. In a grisly sort of battle trophy, celebrating fighters hung a severed goat's head with a cigarette in its mouth from the turret of one of the gutted tanks.

The strikes that began early Sunday gave respite to Benghazi, which the day before had been under a heavy attack that killed at least 120 people. The calm highlighted the dramatic turnaround that the allied strikes bring to Libya's month-old upheaval: For the past 10 days, Gadhafi's forces had been on a triumphant offensive against the rebel-held east, driving opposition fighters back with the overwhelming firepower of tanks, artillery, warplanes and warships.

Now Gadhafi's forces are potential targets for U.S. and European strikes. The U.N. resolution authorizing international military action in Libya not only sets up a no-fly zone but allows "all necessary measures" to prevent attacks on civilians.

But the U.S. military, for now at the lead of the international campaign, is trying to walk a fine line over the end game of the assault. It is avoiding for now any appearance that it aims to take out Gadhafi or help the rebels oust him, instead limiting its stated goals to protecting civilians.

Britain also is treading carefully. Foreign Secretary William Hague refused Monday to say if Gadhafi would or could be assassinated, insisting he would not "get drawn into details about what or whom may be targeted."

"I'm not going to speculate on the targets," Hague said in a heated interview with BBC radio. "That depends on the circumstances at the time."

A military official said Air Force B-2 stealth bombers flew 25 hours in a round trip from Whiteman Air Force Base in Missouri and dropped 45 2,000-pound bombs.

What happens if rebel forces eventually go on the offensive against Gadhafi's troops remains unclear.

Rebels defended their support of the international intervention into Libya -- apparently feeling the sting of criticism from other Libyans and Arabs who warned the country could be divided or collapse into a civil war.

"Libya will not turn into Somalia or Iraq. It will not be divided. We are battling -- the Libyan people -- are battling a gang of mercenaries," Mohammed al-Misrati, a rebel spokesman in the stronghold of Misrata, told Al-Jazeera on Monday.

U.S. Defense Secretary Robert Gates said late Sunday that the U.S. expects turn over control of the operation to a coalition headed by France, Britain or NATO "in a matter of days," reflecting concern that the U.S. military was stretched thin by its current missions. Turkey was blocking NATO action, which requires agreement by all 28 members of the alliance.

Sunday night, heavy anti-aircraft fire erupted repeatedly in the capital, Tripoli, with arcs of red tracer bullets and exploding shells in the dark sky -- marking the start of a second night of international strikes. Gadhafi supporters in the streets shot automatic weapons in the air in a show of defiance. It was not immediately known what was being targeted in the new strikes.

Libyan army spokesman Col. Milad al-Fokhi said Libyan army units had been ordered to cease fire at 9 p.m. local time, but the hour passed with no letup in military activity.

Gadhafi vowed to fight on. In a phone call to Libyan state television Sunday, he said he would not let up on Benghazi and said the government had opened up weapons depots to all Libyans, who were now armed with "automatic weapons, mortars and bombs."

"We promise you a long war," he said.