Libya. Oil. War. Is it that simple?

Obama cited national security and potential massacres as reasons for intervention. But the price of gas also counts 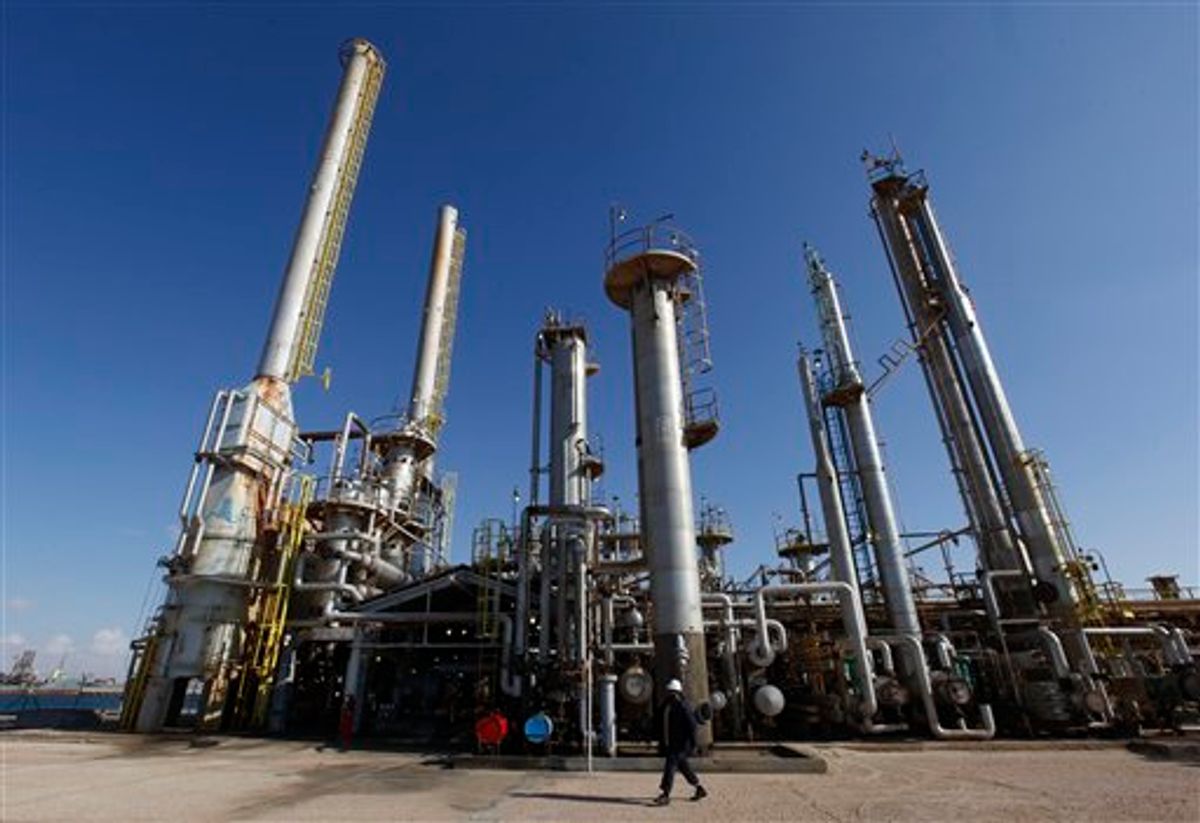 A Libyan oil worker walks in front of a refinery inside the Brega oil complex, in Brega east of Libya, on Saturday Feb. 26, 2011. Production at Brega has dropped by almost 90 percent amid the country's crisis because many employees have fled and few ships are coming to offload the product. (AP Photo/Hussein Malla) (AP)
--

Critics on both the left and right are asking the same question: On what grounds can President Obama justify military intervention in Libya that do not also mandate immediate action in Bahrain and Yemen? In all three cases, authoritarian governments are cracking down on protesters and dissent with murderous reprisals. Moammar Gadhafi might boast the honor of being the craziest dictator in the North African-Mideast region, but sheer insanity doesn't seem quite enough of a rationale for raining down Tomahawk missiles.

Could the answer be as simple as oil? The politics of fossil fuel have explained a century of foreign interventions in the Mideast -- why not this one? And you don't have to be a war-protesting no-blood-for-oil-sign-waving critic to make the claim: On Monday, an influential Democratic congressman suggested Obama's intervention was all about the black gold.

Rep. Edward Markey (D-Mass.), the ranking member of the House Natural Resources Committee, said that he agreed with President Obama's decision to launch, along with allies, attacks against Libya and its leader, Moammar Gadhafi. But Markey said the attacks were primarily motivated by oil.

"We are in Libya because of oil," Markey said on MSNBC. "It all goes back to the 5 million barrels of oil we import from OPEC on a daily basis."

Libya is the 16th largest producer of oil in the world, responsible, before the recent turmoil, for about 2 percent of world production, or around 1,600,000 barrels per day. Yemen and Bahrain are also oil producers -- but far smaller. Bahrain pumps out 45,000 barrels per day; Yemen, 260,000.

Since civil war broke out in Libya, production has fallen by about 75 percent. But the quality of Libya's oil may be more important than the sheer volume of production. Libya's "sweet light crude" oil is extremely low in sulfur content, which makes it highly desirable in global markets: It's cleaner burning and easier to refine into gasoline. Saudi Arabian oil, in contrast, contains much more sulfur. Swap in Saudi oil for missing Libyan oil and you end up maxxing out world refinery capacity, and hiking downstream prices for gasoline.

Rising oil prices are considered a major threat to U.S. economic recovery. So if you're looking for a tidy explanation for Western willingness to intervene in Libya, there you have it. Instability in Egypt, Tunisia, Bahrain or Yemen has little potential for roiling world energy markets. Libya is a major player -- what happens there can and will affect the global economy.

The fact the European oil companies like Italy's Eni and Spain's Repsol have the biggest foreign presence in Libya also goes a long way toward explaining why the U.N. Security Council agreed to act. But the explanation becomes a little less tidy when you consider that the quickest way to restore order to world oil markets would simply have been to let Gadhafi wipe out the rebels, something he seemed poised to do before the U.N. Security Council vote authorizing a no-fly zone. That would have been hard-headed realpolitik.

The situation we're in now, in which Western military might prevents Gadhafi from a quick victory, but keeps in place the conditions for a long-drawn-out civil war, actually predicts the worst possible outcome for oil markets. The brutal truth about intervention in Libya is that whether or not it was motivated by oil or economic concerns, the prospects for a quick resolution and ensuing calm in oil markets are bleak. That's a lesson we should have learned from Iraq.

Energy How The World Works Libya