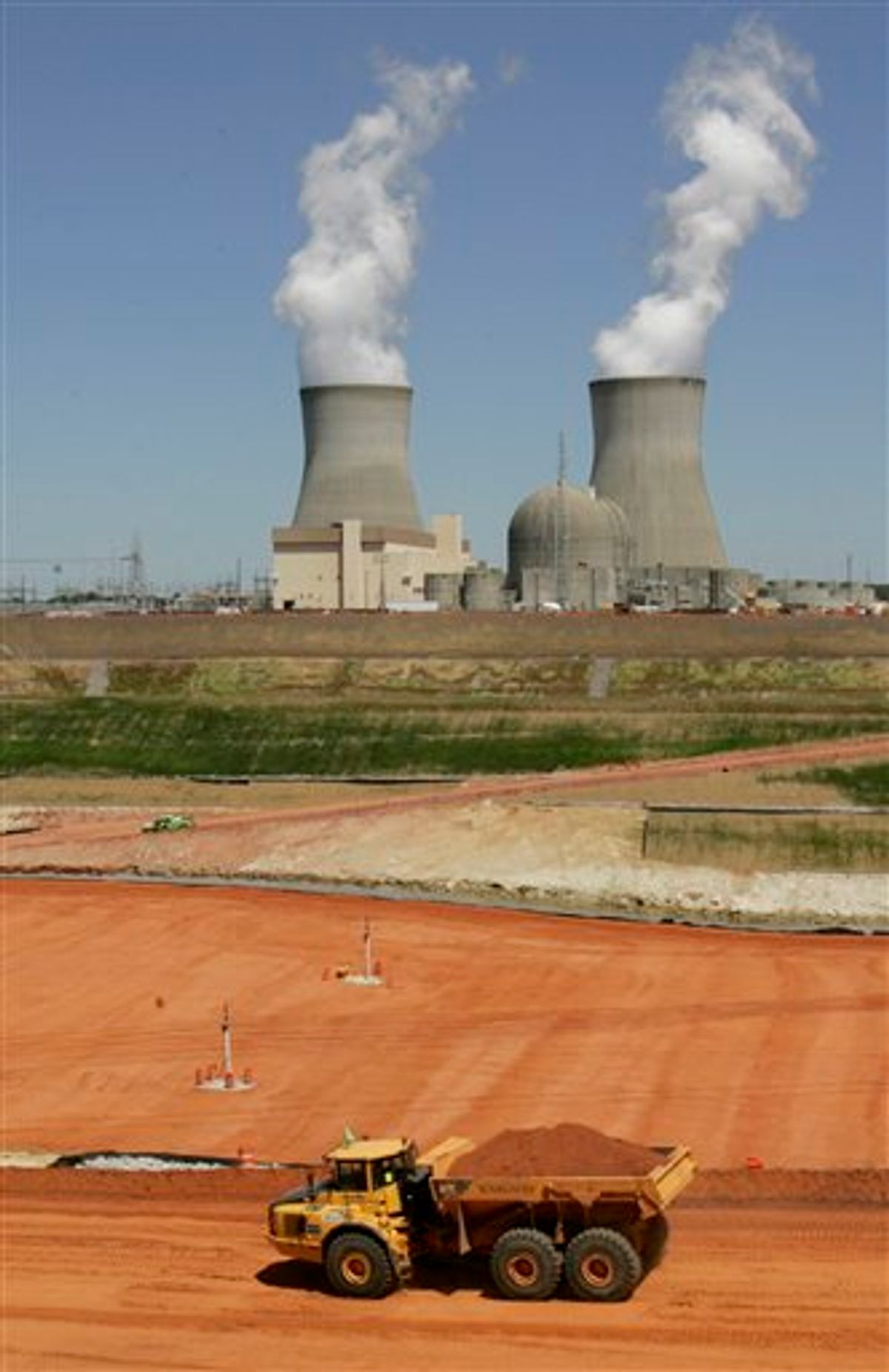 FILE - In this file photo taken April 28, 2010, work continues to excavate what could become the foundation for a new nuclear power plant near the existing nuclear reactors at Plant Vogtle, shown in the background in Waynesboro, Ga. The images of exploding nuclear facilities in Japan could deal a setback to nuclear power as a clean-energy alternative in the United States. (AP Photo/Mary Ann Chastain, file) (AP)
--

The nuclear crisis is Japan, while severe, does not warrant any immediate changes in the U.S, a top U.S. nuclear official said Monday.

The Nuclear Regulatory Commission's executive director for operations, Bill Borchardt, said officials have "a high degree of confidence" that operations at the 104 nuclear reactors in 31 states are safe. He said inspectors at each of the plants have redoubled efforts to guard against any safety breaches.

Borchardt gave NRC commissioners a detailed look at the Fukushima Dai-ichi plan, damaged in the March 11 earthquake and tsunami, and the U.S. response thus far.

Borchardt told commissioners that Units 1, 2 and 3 at the crippled Fukushima plant have some core damage, but that containment for those three reactors has not been breached.

"I would say optimistically that things appear to be on the verge of stabilizing," he said.

The Tokyo Electric Power Co., which operates the troubled plant, has been able to bring offsite power onto the site from a nearby transmission line, Borchardt said, the first sign of progress at the plant in recent days. Water is being injected into the reactor vessels in Units 1, 2 and 3, and containment in all three units appears to be functional, he said.

The five-member commission was reviewing the Japanese crisis -- it is the worst nuclear disaster in a quarter-century -- and was set to approve a 90-day safety review of operations at the U.S. nuclear fleet to comply with a call last week by President Barack Obama.

NRC Chairman Gregory Jaczko said his agency has a responsibility to the American people to undertake "a systematic and methodical review of the safety of our own domestic nuclear facilities," in light of the Japanese disaster.

The nuclear plant's cooling systems were wrecked by the massive earthquake and tsunami that devastated northeastern Japan on March 11. Since then, conditions at the plant have been volatile; a plume of smoke rose from two reactor units Monday, prompting workers to evacuate.

As work at the plant continues, U.S. officials will look to see whether information from Japan can be applied in the United States to ensure U. S. reactors remain safe, Jaczko said.

But even some of his fellow commissioners had questions about the U.S. response.

Commissioner George Apostolakis wondered why the NRC did not close some older nuclear plants, as Germany did.

"Are we less prudent than the Germans?" Apostolakis asked.

Borchardt replied that officials "asked ourselves the question every single day, 'Should we take a regulatory action based upon the latest information?'" Each time, he said, the answer was no.

"I'm 100 percent confident in the review that we've done and we continue to do every single day that we have a sufficient basis to ... conclude that the U.S. plants continue to operate safely," he said.

Borchardt also defended the commission's recommendation that U.S. citizens stay at least 50 miles away from the troubled Fukushima plant. Current U.S. guidelines call for a 10-mile evacuation zone around all U.S. nuclear plants, and some critics have suggested that the NRC was imposing a stricter standard on Japan than on U.S. nuclear reactors.

Borchardt said the recommendation about Japan was made based on conditions at the plant -- namely that there were degraded conditions in two spent-fuel pools at the site and likely damage to three of the reactor cores.

If the same conditions occurred in the United States, he added, "we would have done the same analysis and gone through the same thought process," and likely would have extended the evacuation zone and taken others steps to protect the public.

A spokesman for the Nuclear Energy Institute, an industry group, said U.S. officials acted appropriately in recommending the 50-mile evacuation zone for U.S. citizens in Japan.

"They acted cautiously based on the uncertainty of what the radiation exposures are at the plant," spokesman Steve Kerekes said.

NRC staff and other U.S. experts have been in Tokyo for more than a week conferring with Japanese government and industry officials on the disaster. A second wave of NRC employees is heading to Japan this week, in many cases replacing workers who are already there.