Gates: U.S. expects to hand off Libya lead in "days" 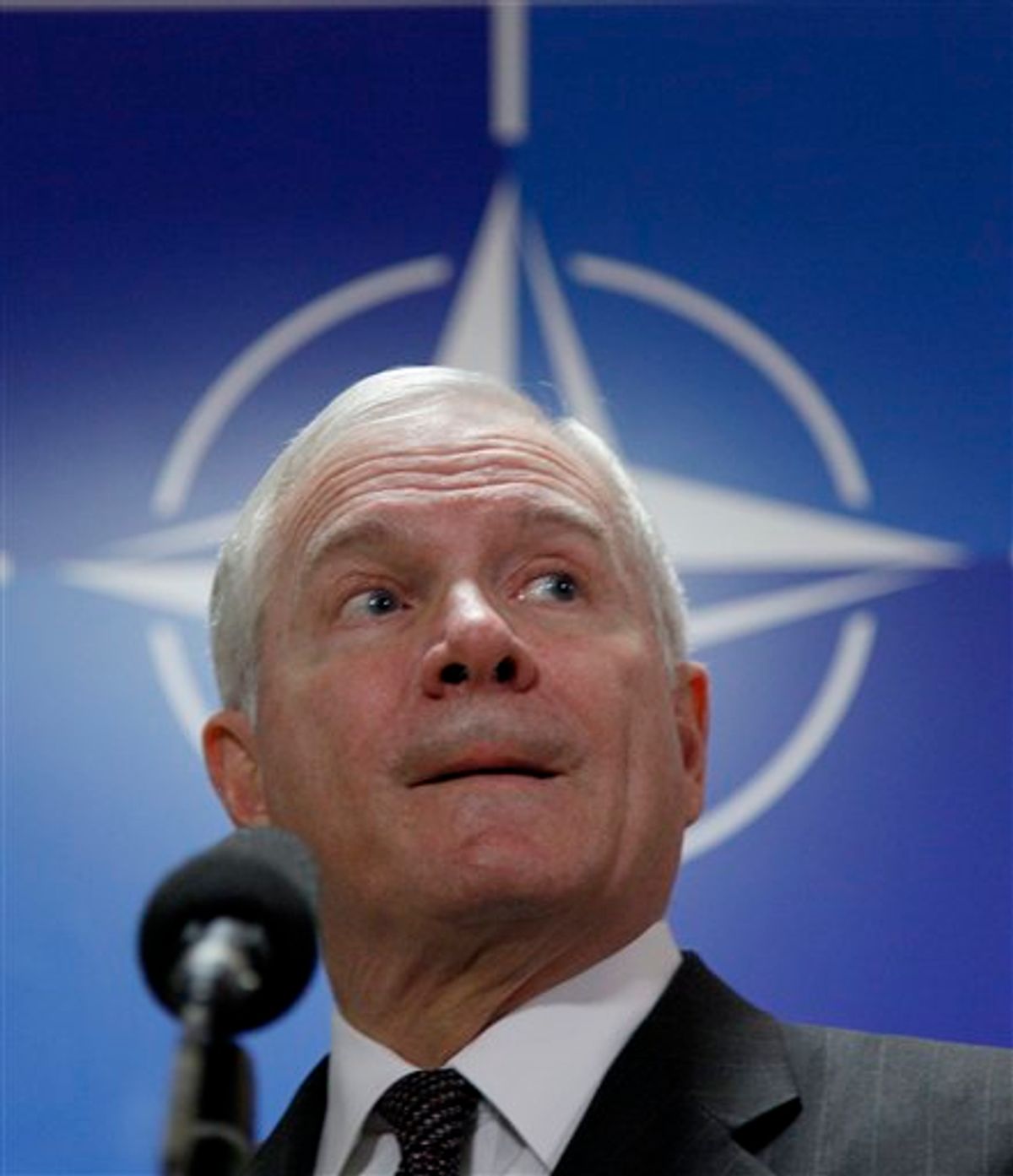 U.S. Defense Secretary Robert Gates speaks with the media after a meeting of NATO defense ministers at NATO headquarters on Thursday, March 10, 2011. NATO says it has started round-the-clock surveillance of the air space over Libya, where government jets have been pounding rebel positions in an effort to defeat an uprising. (AP Photo/Virginia Mayo) (AP)
--

U.S. Defense Secretary Robert Gates said Sunday that the U.S. expects to turn control of the Libya military mission over to a coalition -- probably headed either by the French and British or by NATO -- "in a matter of days."

In his first public remarks since the start of the bombings, Gates said President Barack Obama felt very strongly about limiting America's role in the operation, adding that the president is "more aware than almost anybody of the stress on the military."

The two key possibilities, he said, are a combined British-French command or the use of a NATO command. He acknowledged there is "some sensitivity on the part of the Arab League to being seen to be operating under a NATO umbrella."

Gates' comments came as American ships and aircraft continued to pound Libya, taking out key radar, communications and surface-to-air missile sites along its Mediterranean coast. Even as his military was under siege, Libyan leader Moammar Gadhafi vowed to endure through a long war against what he called colonial crusader aggression by the international coalition.

The Pentagon chief had cautioned early on about getting involved in Libya's civil war, telling Congress that taking out Libya's air defenses was tantamount to war. Others have worried that the mission could put the U.S. on a path to deeper military involvement in yet another Muslim country -- even as nearly 150,000 troops continue to battle in Afghanistan and Iraq.

Gates said that in the discussions leading up to the launch of attacks, he tried to provide "a realistic appreciation" of the complexities involved in setting up a no-fly zone, and noted it would require an attack on Libya -- which is what happened.

He said Obama and his top advisers discussed every aspect and possible outcome of the military intervention in depth, and in the end there was unanimous support for the action taken by the president.

Asked about working with the rebels, and whether the coalition knows enough about them to forge a partnership, Gates said Libyans must ultimately resolve matters themselves -- though it remains to be seen what additional outside help will be provided.

Still, he added, "We certainly know a lot about Gadhafi, and that's good enough for me."

Asked if the bombings should target Gadhafi, Gates said the coalition should stick to the objectives in the U.N. Security Council resolution, and adding new ones would create a problem. "It is unwise to set as specific goals things that you may or may not be able to achieve," he added.

He said most nations want to see Libya remain a unified state.

"Having states in the region begin to break up because of internal differences, I think, is a formula for real instability in the future."

The military assault on Libya began Saturday with the launch of about 112 Tomahawk cruise missiles from U.S. and British ships, followed by a coordinated air assault by U.S. warplanes -- including Air Force B-2 stealth bombers and Marine attack jets in the pre-dawn hours.

Adm. Mike Mullen, chairman of the Joint Chiefs of Staffs, described the campaign's aims as "limited," saying it "isn't about seeing him (Gadhafi) go."

Gadhafi has vowed to fight on, promising a "long war," and his troops have lashed back, bombarding the rebel-held city of Misrata with artillery and tanks on Sunday, the opposition reported.