The tallest woman in the room tells all

On the basketball court, being 6-foot-4 is incredible. In the world of dating, however, it's more complicated 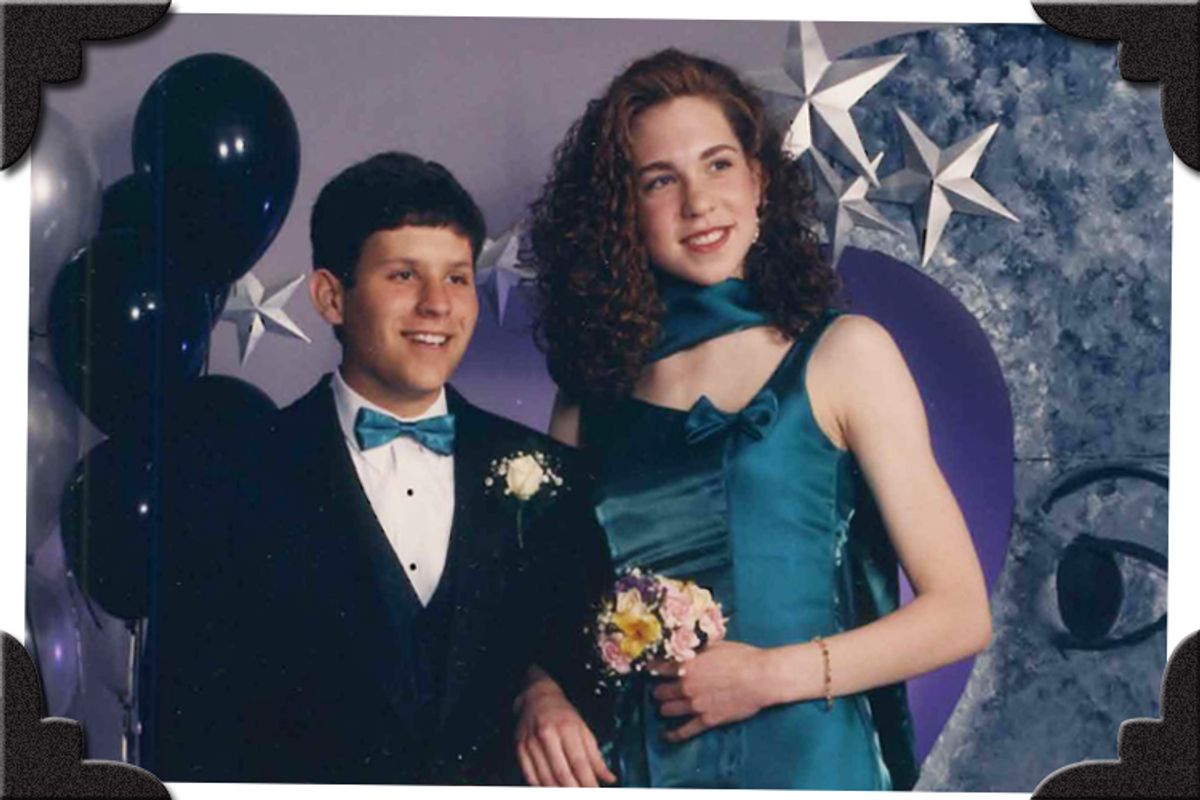 A photo of the author at prom
--

In high school my teammates and I teased our 5-foot-11 basketball coach about the shorter, handsome, rival coach who openly flirted with her during halftime. "Hey, we're all the same height lying down," she would reply, a line that sent us shrieking. Thus, my first lessons in love: A) When you're a tall girl, people are going to have an opinion about the appropriate height of your man; and B) Get over it.

Six-foot-4. One hundred twenty-seven pounds. Eighth grade. It was a miracle of physics that I could walk, let alone run up and down a court bouncing a ball. Luckily, my parents launched a highly successful brainwashing campaign to convince me that being a foot taller than the average American woman was a good thing. My mother enrolled me in ballet. Like a Great Dane among perfect mini-poodles, I learned balance and coordination. My father gently tapped my scapula any time he noticed me stoop. Gabrielle Reece's "Big Girl in the Middle" was required reading.

It worked. Despite compelling genetic evidence (dad: 6-foot-4, mom: 5-foot-11), I believed that I had created this body by mentally stretching my limbs in all directions. I was determined not to let anyone outgrow me. I trained like hell -- summer camps, travel leagues, a personal weight trainer. Anyone could see that the hardwood and I were meant to be.

But if my parents arranged my basketball marriage, they didn't prepare me for dating. I was hapless with boys, especially the ones I really liked. The better I got at the sport -- MVP of my state championship high school team, then a full scholarship to play at North Carolina -- the more it felt like my love life itself was the game the rest of the world was watching. Cheering for or against me. Right out loud. Fans or foes. It was always March Madness.

Sometimes it came from strangers such as the business-minded 6-foot-7 guy who accosted me on the street one morning. "Hey, baby, let's make some NBA ballers," he shouted. "Come on, we'll make bank!"

Or the Staples employee who asked if we could play one-on-one for my heart.

Or the random Scottish guy who declared, "You gotta be Tarzan's big brother to handle you!"

But at least it was flattering. After college, having left the Land of the Tall and my Amazon tribe, I realized that tipping ball at center court is not universally considered the greatest thing ever. I found myself alone in the bowels of the Times Square subway station on my way to a job interview, looking down across heads in all directions. The truth struck hard: The world is short.

Once employed, I met a colleague who had been in a serious accident and underwent two years of excruciating surgeries. When I told her about my new relationship with our 5-foot-11 co-worker -- the first man I'd been excited about in a long time -- she said, "I saw this documentary on midgets. That limb lengthening procedure is very controversial."

I had heard about the operation where they cut bone and keep stretching it to promote new growth. It sounded medieval.

"So I was wondering," she said. "Have you ever considered limb shortening?"

What? Since when was an orthopedic specialist required if your man looked up to you? Is this what tall girls who didn't play sports dealt with all their lives? No wonder they slouched.

Then there was the hipster I worked with at an environmental nonprofit. His way of flirting was to ask, "I've never known a girl as comfortable with her height as you. Is that like, for real, or do you secretly hate yourself?" He added free advice, "Never wear vertical stripes. Remember that." Weeks later I happened to don a pair of pinstriped jeans. He noticed immediately. "Oh, how you mock me with your pants," he said.

I never knew which way the crowd might turn, which made me anxious and eager to win people over -- after all, winning was my specialty. Yet I didn't wish I could make myself shorter until a couple years later when I met up with my then-boyfriend, a healthy 6-foot-1, and his old fraternity buddies at a karaoke bar in Koreatown. I was meeting them for the first time and wanted to make a good impression. I sat on a bar stool to blend in better, slumping into my boyfriend as we chatted with his friends. Everything was going great until a gangly fellow sauntered up and bluntly demanded, "Do you play basketball?"

It was annoying but benign, one of the 20 times I'd be asked that in a week. But before I could respond my boyfriend was in his face: "What's your problem? You think she doesn't get asked that all the time by idiots like you?!"

He pushed the guy 20 feet away from me, up against a wall. His best friend joined him. It felt like a fistfight might break out. I stared at the soundless VH1 Divas Concert on the TV above the bar. Let this be over. Beyoncé ex machina.

I liked that he had wanted to defend my honor -- this was a first -- but had I really been assailed? And either way, could he handle the public commentary that always came along with me?

A month later we walked up 1st Avenue after dinner, holding hands around midnight. I heard a voice rolling past us, from a man hanging onto the back of a garbage truck. "He's too short for you!" I felt myself flush and looked down. Focus. Composure. Like dealing with hecklers behind the backboard when you're shooting foul shots. The garbage man continued shouting 15 feet from us. His redoubled his efforts in an obnoxious, bellowing loop, desperate to get a reaction. "He is too short for you!! He. Is. Too. Short. For. You."

We broke up shortly thereafter.

Ten months later I was in a Long Beach Airport bathroom near my departure gate. A woman behind me asked sharply, "How tall are you?"

"Six-foot-4," I said, smiling. She was about 60 years old with short gray hair, a University of Kentucky sweat shirt and vintage pink and blue Jams.

"Ugh," the woman groaned and rolled her eyes.

"My daughter can't find a man taller than her," she shook her head ruefully. Catastrophe of the century. "Six-foot-4"? God, that's even worse."

I was too stunned to speak.

I wanted to hurt her. I imagined blinding her with a ring so flashy that she couldn't even see straight until she arrived back in her Podunk hometown. The truth was I was 32 years old and single. Almost all of my former teammates were now married, even the lesbians. But I wasn't ready yet. And it didn't have anything to do with the length of my inseam.

"Your daughter should date shorter guys." I turned on my heel, smacked open the door on its hinges, and thrust it back as hard as I could, wanting a good hard slam. It only swung, silently, back and forth.

We're all the same height lying down!

Exasperated and exhausted, I stood next to the gate agent, eager to get out of there. Two dolled-up, flaxen-headed young girls approached for preliminary boarding. Straight from Disneyland. Matching braids and tiaras. The younger one, probably 6 years old, wore a backpack with images of all the popular princesses on the big pocket. She looked over at me and then tugged at her mother, whispering something.

I closed my eyes and sighed.

The mother leaned in toward me as the girl scooted out the door. "Excuse me," she began. "My daughter wanted me to ask you something." I braced myself. "Are you a model?" Shocked, my response came out in a low, quiet voice, "No, I'm a basketball player."

"Ooohh," she cooed. As if this might be just as exotic and beautiful.

I was surprised by my automatic response. It had been 10 years since college, and I couldn't remember the last time I had picked up a ball. My left-hand baby hook shot was long gone and my knee creaked when it rained. I didn't have a team I belonged to anymore. But it didn't matter.

The cheers and jeers on either side of my personal imaginary court would continue -- hurtful one moment and flattering the next. As if the crowd should decide whom I should love and how I fit into this world, or didn't.

Besides, maybe I had it all wrong. I had fallen into the trap that athletes can't seem to avoid -- thinking that it's all about you. Like any true fans, these people were simply using me to reflect what they saw in themselves. I was a walking Rorschach, mirroring their self-image. The hipster secretly loathed himself. My colleague who had been in the accident felt her need for medical repair. The Kentucky mom saw me as the spinster daughter she had created. And the kid saw me as a princess because she saw herself as a princess. Maybe this is how it is for everyone with some noticeable difference -- whether a physical disability, extreme beauty or just being really, really tall.

I stepped out first into the warm, starry night, up the ramp before me. Shoulders back, ready for flight.

Melissa Johnson is a documentary filmmaker, producer, and writer living in New York City. Her soon-to-be completed feature documentary, "No Look Pass," will screen at film festivals across the country in the months ahead.