Have taste, will travel: Your favorite recipes from afar 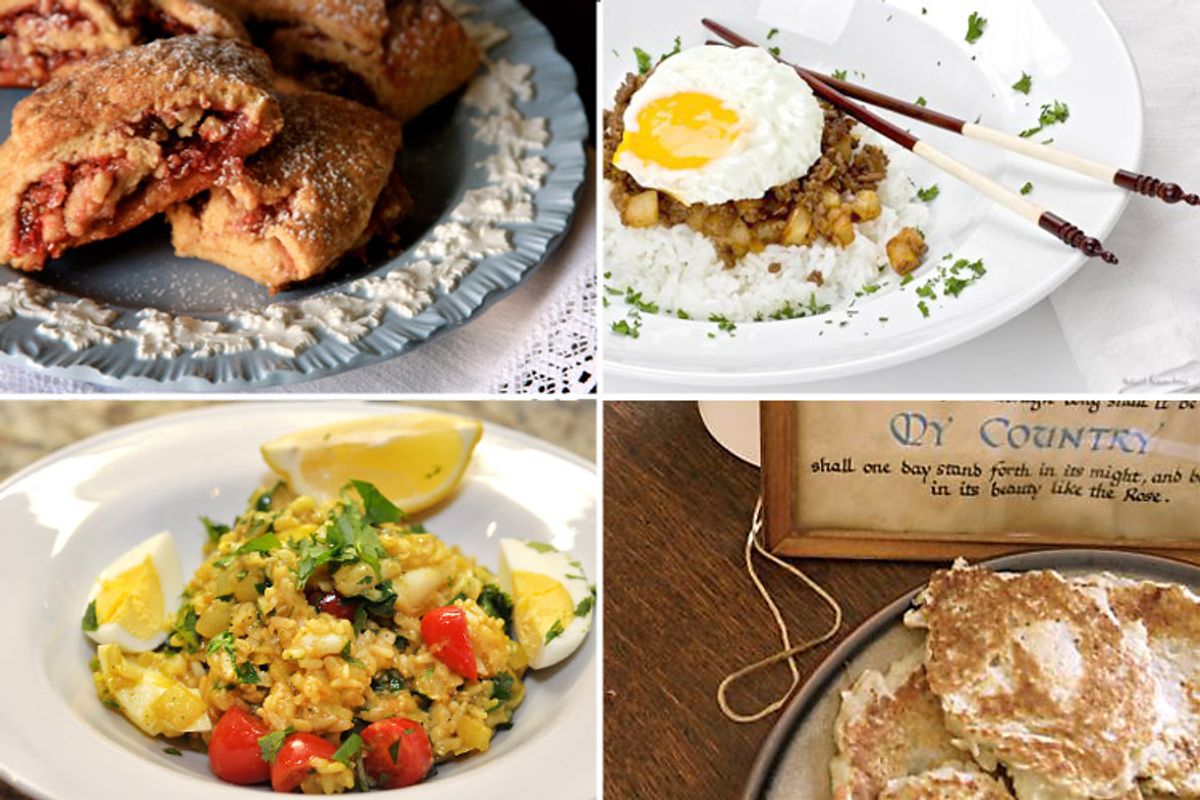 This week, we are celebrating the book "High on the Hog, A Culinary Journey From Africa to America" by our friend Dr. Jessica Harris. In her far-reaching, nuanced and thoughtful history of African-American food, she traces the origins of dishes we think of as "black" food, and many we don't often realize came from Africa. She tells stories of unknown African-American figures who have been instrumental in America's relationship with food, from the fashionable dandy slave chefs of Washington and Jefferson to street vendors in Northern cities. But most important, she inspires readers to look deeper at what's on their plate, to ask questions of our cooks and eaters, and to find the complex social histories, politics and relationships connecting us to each other through out shared tastes. To honor that work (check it out here), we asked this week for your best recipes that have come to here from afar ... and we're giving away a copy of the book to the winners!

Minchee (beef and potato hash, Macau-style) by Felicia Lee: Macau is one of the world's great, barely known places for food, a combination of the tastes of Chinese natives, Portuguese colonists, Creoles, with a touch of African and Indian influence, a couple of well-timed Britishisms from Hong Kong next door, and then brought to America by immigrants. Here, Felicia lets us in on a familiar-seeming hash of ground beef and potatoes, but flavored with garlic and soy sauce and served on rice.

Russian tea biscuits by Vivian Henoch: Some people know their grandmother's recipes by heart, and some have to make due, figure out, and make their own traditions. Here, Vivian is in the latter camp, sharing these tender, scone-like rugelach filled with coconut, nuts, raisins and jam.

Kedgeree by Julia Benyon: Is it British? Indian? American? Any way you look at it, this simple, easy dish of curried fish, onions, eggs and rice is a satisfying, mixed-up mongrel of a dish.

Boxty (Irish potato pancakes) by Trish O'Rourke: Grated and mashed potatoes give these pancakes heft and texture, fried crisp in butter. They're satisfyingly plain, a solid old food. But, as Trish writes, "What to do with a leftover potato is in itself an immigrant story, a simple one that gets told over and over again."

PLUS, ALSO, TOO: THE HONORABLE MENTIONS

Corn "oysters" by Lisa Barlow: After an awful discovery of her family's past, Lisa inherited not only her history but also that history's recipes. Cooking those foods becomes a bittersweet reminder of where she came from, but you can have these recipes without the same baggage. In this case, we have corn "oysters," griddled fresh corn cakes that look a bit like fried oysters when done.

Noah's pudding by Fusun Atalay: In this intriguing Turkish dish, grains, beans, nuts, dried fruit and aromatic spices and flower waters get stewed together to make a sweet sort of porridge, crackling with a whole mess of flavors, colors and textures.

Sweet-tart ginger-braised pork with peanuts and papaya by Linda Shiue: Changing up a traditional Chinese dish meant for nursing moms (really), Linda adds a personal, familial spin by including the tropical fruit her in-laws so loved while living in Trinidad.

Resolutely un-Italian spaghetti and meatballs by Brandi Jo Plaster: Ever wonder how to write down a recipe by someone whose units of measure are "a handful of this, and just enough of that"? Well, if you're Brandi, you develop an ingenious way to weigh out everything Grandma throws into the pot. And in this case, you also get a spaghetti and meatballs so crazy it may just be brilliant.

Cuban pork roast with rice and black beans by At Home Pilgrim: No one loves fresh ham as much as the Cubans, and with its three-day soak in garlic and citrus juices, cooked until falling apart, it's not hard to see why.

Big Daddy's Sugar Burgers by Dawn E. Bell: A quick portrait of a favorite pair of grandparents only gets sweeter with a "recipe" for brown sugar biscuit sandwiches.

It might not look like it where you are right now, but believe it or not, it's spring! It's time to stop thinking about potatoes and apples left over from the fall, and get cracking on fresh food coming out of the thawing ground. But ... what exactly does that mean for you?

Looking at this fascinating map to see what's coming into season across the country, we see asparagus, broccoli, artichokes, lettuces, rhubarb, mushrooms, peanuts, strawberries, cooking greens, spinach, radishes and a bunch of their friends. But, of course, what's "spring" in Georgia is not really the same in Oregon.

So this week, share with us a favorite recipe for a favorite spring crop – but one that's local to you!

Be sure to tag your posts: SKC Spring (Please note that by participating, you're giving Salon permission to re-post your entry if it's chosen as a winner, and acknowledging that all words and images in your post are your own, unless explicitly stated. Adaptations of existing recipes are fine, but please let us know where the original comes from. And if you'd like to participate but not have your post considered for republication on Salon, please note it in the post itself. Thanks!)

Scores will be very scientific, given for appealing photos, interesting stories behind your submissions, creativity, and execution.