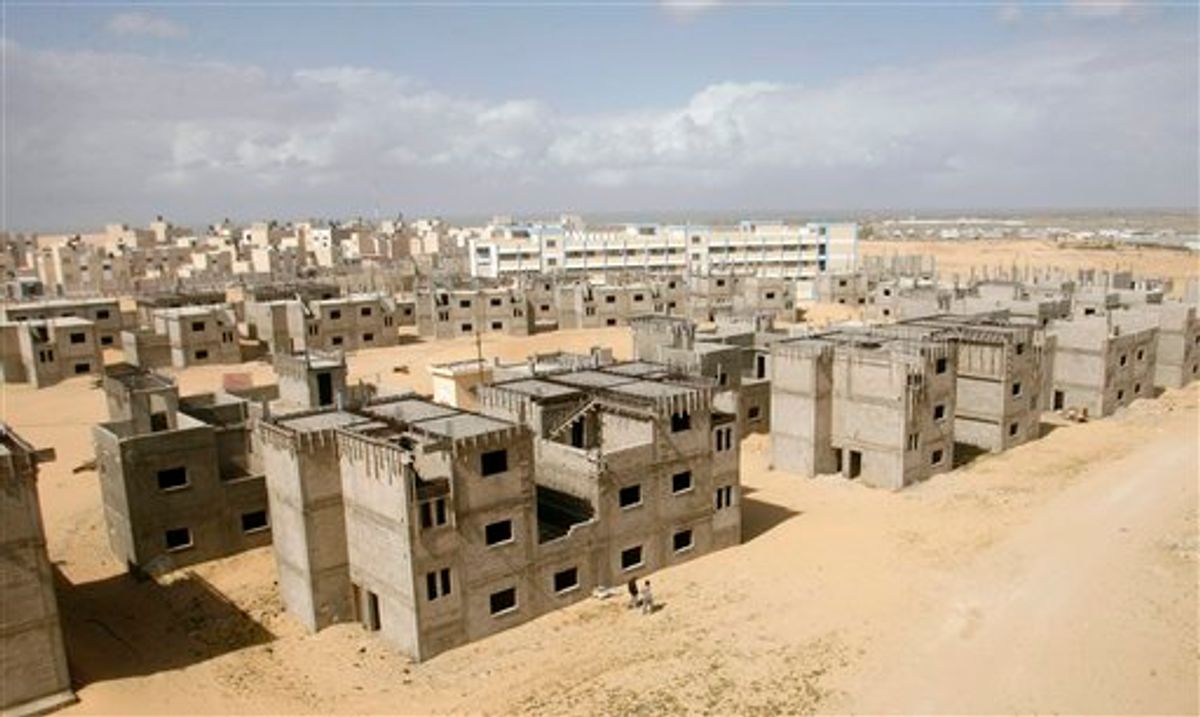 Palestinians pass by unfinished buildings at the UNRWA housing project in Khan Younis, southern Gaza Strip, Wednesday, March 9, 2011. Israel's military began transporting 40,000 tons of construction materials into the Gaza Strip at the Sufa Crossing on Wednesday, in a new move to ease its blockade of the coastal territory. The week-long operation will supply badly needed gravel for U.N. schools and other humanitarian projects, including homes in Khan Younis. (AP Photo/Eyad Baba) (AP)
--

Israel's volatile border with Gaza has been largely quiet since an overwhelming Israeli military offensive two years ago. But Israeli officials say Gaza's ruling Hamas militant group has recovered from the fighting, and the area has begun to heat up in recent weeks.

The Israeli army confirmed the incident, saying it opened fire at a group of militants who were about to fire a missile at a tank.

The attacks were in response to a barrage of 56 mortar shells and rockets fired by Gaza militants over the past week, the military said. The tunnels, it added, were meant for militants to infiltrate Israeli territory to attack civilians and soldiers.

A military statement vowed to "respond with determination" to any attempt to attack Israelis.

Abu Obeida, a spokesman for Hamas' militant wing, said Hamas had carried out the recent attacks in response to Israeli "aggression."

But he said the group remains committed to an informal cease-fire if Israel keeps things quiet.

"The enemy will pay the price if it continues its aggression and its crimes against our people in the Gaza Strip," he said, adding: "The Palestinian factions will adhere to halting resistance actions if the Zionist enemy stops its aggression."