Post-disaster Japan is a portrait of misery 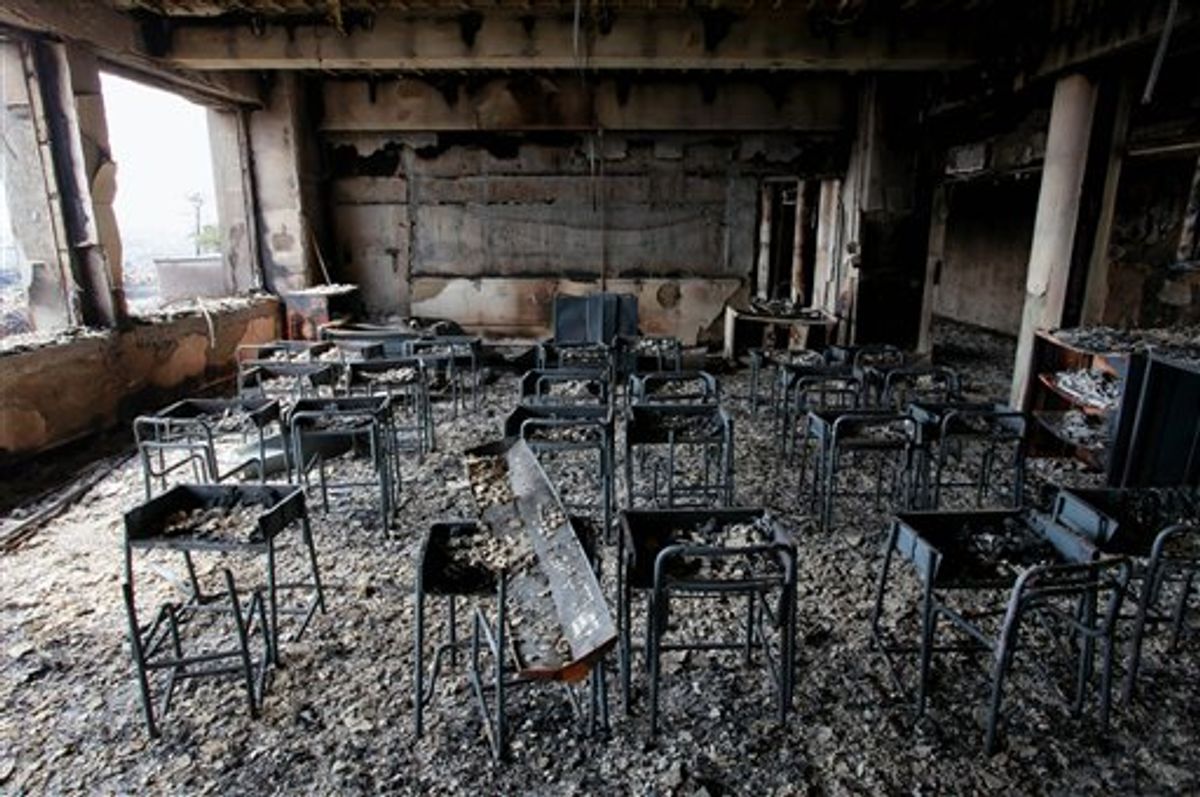 In this Sunday, March 20, 2011 photo, a classroom burned by a fire is seen in the March 11 earthquake and tsunami-destroyed city of Ishinomaki, northern Japan.(AP Photo/Mainichi Shimbun, Takashi Morita) JAPAN OUT, NO SALES, MANDATORY CREDIT (AP)
--

Bodies are strewn among the knotted skeletons of entire towns. Military helicopters clatter overhead. Survivors who lost everything huddle under blankets in schools-turned-shelters as foreign governments dispatch aid and urge their citizens to flee.

After years spent reporting from desperate and war-torn corners of the world, the scenes I've witnessed here are unsettlingly familiar.

It's the setting that's not.

Here, in one of the richest and most advanced nations on earth, I've found one of most challenging assignments of my career.

Japan's cascading disasters were spawned by one of the planet's strongest quakes in a century. Next came a tsunami that killed more than 10,000 people and demolished vast swaths of the northeastern coast in minutes. That triggered a nuclear emergency that has amplified a deepening sense of apocalyptic doom.

The grim sights have been widely compared to the astonishing destruction wrought here during World War II. But it also reminds me of Lebanon in 2006 -- when Israel's Hezbollah-seeking rockets leveled whole villages -- or any other conflict zone filled with refugees and military convoys.

When I stepped off the plane in Tokyo the morning after the quake, Narita International Airport was quiet. The escalators had been shut off. Stranded passengers lay on sleeping bags throughout the terminal.

Outside, not a single taxi stood waiting. We finally found one willing to take us downtown, but only at the departure hall where a dozen others dropping off fleeing travelers had already refused to give us a ride.

Later, I headed north toward the tsunami zone with a team of three other Associated Press journalists. There were obstacles at every turn. The GPS system could not know that some roads no longer existed or that others had been blocked by mudslides or ripped apart during the mighty tremor.

That first night, it took 14 hours on backroads to cover 180 miles (300 kilometers). When we finally reached the ruined port of Sendai the next morning, we found survivors wearing surgical masks picking through the wrecked junkyard of their annihilated city.

In a tech-savvy society better known for hosting robot marathons, the crisis has produced surreal images, some more apt to appear in a novel about life after a nuclear holocaust: Cut off with no electricity and no phone reception, the hungry and isolated braving long lines outside near-empty grocery stores just to get food; the desperate homeless warming frigid hands in heavy snow above fires fueled by the wooden planks of their own pulverized homes.

In Kesennuma, I saw the hull of a behemoth ship parked inland on a sea of burnt debris beside a wrecked 7-Eleven.

In Shizugawa, a lone Japanese soldier relentlessly swept a small strip of pavement that somehow survived, a futile and slightly bizarre effort considering the entire city surrounding it was reduced to a mashed heap of garbage.

Most of these towns have simply ceased to exist. In some, far from the ravaged coast, everything is still closed: restaurants, malls, pinball arcades, drugstores -- even ATM machines because they cannot function without power.

We have survived mostly on snack food -- peanuts and potato chips and canned coffee scavenged from mostly empty street-side vending machines. When we found one small food store open, it's dwindling stocks already plundered, we bought everything left that we could fit in our car -- raw sausages, dried squid, bread.

Finding fuel is a constant concern. Vast lines of cars queue ominously at every gas station -- even those that are closed -- waiting up to 36 hours to buy limited rations.

We need gas not only to move, but to charge our laptops and satellite transmitting equipment through an inverter that connects to our car's cigarette lighter -- which at one overloaded point blew a fuse, threatening to bring our mission to a halt.

One big problem with Japan's crisis: It doesn't feel like it's over.

Every night, we are woken by aftershocks. These come during the day, too -- during interviews, while parked in our car -- grim reminders that what started it all can be unleashed again, anytime.

Every day, we hear snippets of news about the possibility of total nuclear meltdown at the Fukishima Dai-ichi plant, more than 150 miles (240 kilometers) from where we have been working. There is talk of helicopter crews testing positive for radiation exposure, of foreign governments urging their nationals to leave.

The experience got even more surreal when AP issued me a pocket-sized "dosimeter" -- a device that looks like a Maglite flashlight and monitors surrounding radiation levels from the safety of one's pocket -- and a ration of potassium iodide to protect my thyroid from cancer in the event of a serious nuclear event.

With heavy snow now adding another level of desolation, I sometimes wonder: If it gets any worse, can we get off this island?

With nowhere else to stay, we spent many nights in makeshift shelters, sleeping alongside displaced families wrapped in blankets on the crowded wooden floors of school basketball courts.

At all of them, large wall-mounted clocks are still frozen at 2:46 p.m. -- give or take a few minutes -- the moment when the earthquake changed everything.

It's hard not to be impressed with the immense grace of the people we've encountered along the way. I've seen no fighting, no shouting, only patience.

We've been offered miso soup and rice balls -- by people who have lost everything and have no idea when or how they'll ever go home. The shelters we've stayed at are so well-organized that one even offered different trash bags for recycling, and there were group calisthenics at dawn.

On the surface, there seems too little emotion, too much stoicism. But loss is everywhere.

At Ishinoseke, a man who has not seen his wife since he spoke to her minutes before the tsunami told me with the utmost certainty that she MUST be alive. After failing to find her at seven different shelters, he began searching for her inside a city gym-turned-morgue where the bodies of 300 tsunami victims lay under blue tarps, waiting to be identified.

At a shelter in Shizugawa, I watched an elderly man tell a group of survivors that those who'd gone missing had not yet been confirmed dead.

Was it denial or real hope? I couldn't tell.

As he read out the names of dozens who have not been seen since March 11, women listening intently on their knees began weeping in silence.

AP Bangkok Bureau Chief Todd Pitman, who has spent much of his career reporting from war zones in Afghanistan, Iraq and the Middle East, as well as some of the most troubled nations in Africa, has found one of his most challenging assignments in Asia's richest and most technologically advanced country.