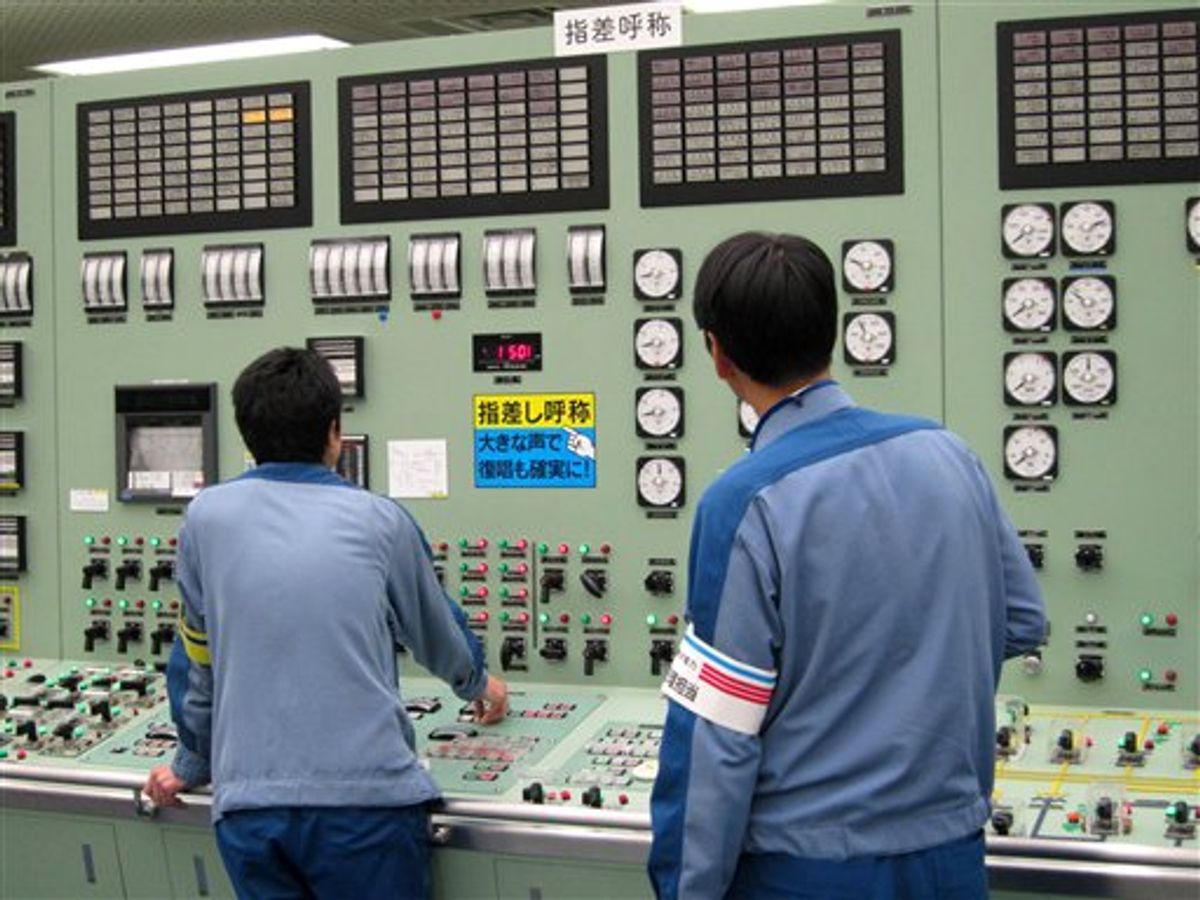 The operator of Japan's leaking nuclear plant says power lines have been hooked up to all six reactor units, though more work is needed before electricity can run through them.

The plant's operator, Tokyo Electric Power Company, announced the hookup Tuesday but cautioned that workers must check pumps, motors and other equipment before the electricity is turned on.

Reconnecting the Fukushima Dai-ichi nuclear complex to the electrical grid is a significant step in getting control of the overheated reactors and storage pools for spent fuels. But it is likely to be days if not longer before the cooling systems can be powered up, since damaged equipment needs to be replaced and any volatile gas must be vented to avoid an explosion.

In another day of progress and setbacks, a pool holding spent nuclear fuel heated up to around the boiling point, a nuclear safety official said. With water bubbling away, there is a risk that more radioactive steam could spew out. "We cannot leave this alone and we must take care of it as quickly as possible," said the official, Hidehiko Nishiyama.

It wasn't clear if crews had to retreat to stop work hooking up electrical systems and checking machinery to power up cooling systems.

People at Fukushima city's main evacuation center waited in long lines for bowls of hot noodle soup. A truck delivered toilet paper and blankets. Many among the 1,400 people living in the crowded gymnasium came from communities near the nuclear plant and worry about radiation and weary of the daily routine of the displaced.

"It was an act of God," said Yoshihiro Amano, a grocery store owner whose house is 4 miles (6 kilometers) from the reactors. "It won't help anything to get angry. But we are worried. We don't know if it will takes days, months or decades to go home. Maybe never. We are just starting to be able to think ahead to that."

Public sentiment is such that Fukushima's governor rejected a meeting offered by the president of Tokyo Electric Power Co., or Tepco, the utility that runs the nuclear plant.

"What is most important is for TEPCO to end the crisis with maximum effort. So I rejected the offer," Gov. Yuhei Sato said on national broadcaster NHK. "Considering the anxiety, anger and exasperation being felt by people in Fukushima, there is just no way for me to accept their apology."

The nuclear crisis has added a broader dimension to the disaster unleashed by the March 11 earthquake and tsunami that pulverized the northeast coast, leaving more than 9,000 dead by official count and twice that in police estimates.

Three of Japan's marquee companies -- Sony Corp., Toyota Motor Corp. and Honda Motor Co. -- announced halts to production at plants in Japan. The reason is a shortage of parts -- a result of so many ruined factories in the disaster area.

Fears about radiation are reaching well beyond those living near Fukushima and the 430,000 displaced by the earthquake and tsunami to encompass large segments of Japan. Traces of radiation are being found in vegetables and raw milk from a swath of farmland, forcing a government ban on sales from those areas.

Seawater near the Fukushima plant is showing elevated levels of radioactive iodine and cesium, prompting the government to test seafood.

Government officials and health experts say the doses are low and not a threat to human health unless the tainted products are consumed in abnormally excessive quantities. But the government measures to release data on radiation amounts, halt sales of some foods and test others are feeding public worries that the situation may grow more dire.

"We acknowledge this situation has caused anxiety among the general public but even if the accident hadn't happened we would be monitoring and taking action if the government's very conservative standards are exceeded," the government's spokesman, Chief Cabinet Secretary Yukio Edano, said at a briefing.

In the first five days after the disasters struck, the Fukushima complex saw explosions and fires in four of the plant's six reactors, and the leaking of radioactive steam into the air. Since then, progress has been made cooling the active reactors and replenishing spent fuel pool, though setbacks have occurred.

The bubbling in Unit 2's storage pool is worrisome. If unabated, the water could boil away, exposing fuel rods that would throw up more radiation. At extremely high temperatures, the zirconium cladding around the rods could melt and explode.

An official of the U.S. Nuclear Regulatory Commission said in Washington that Units 1, 2 and 3 have all seen damage to their reactor cores, but that containment is intact. The commission's executive director, Bill Borchardt, said that "things appear to be on the verge of stabilizing."

The Vienna-based International Atomic Energy Agency said that radiation seeping into the environment is a concern and needs to be monitored. "We are still in an accident that is still in a very serious situation," said Graham Andrew, senior adviser to IAEA chief Yukiya Amano.

IAEA monitoring stations have detected radiation 1,600 times higher than normal levels -- but in an area about 12 miles (20 kilometers) from the power station, the limit of the evacuation area declared by the government last week.

Radiation at that level, while not high for a single burst, could harm health if sustained. If projected to last three days, radiation at those levels would U.S. authorities would order an evacuation as a precaution.

The levels drop dramatically the further you go from the nuclear complex. In Tokyo, about 140 miles (220 kilometers) south of the plant, levels in recent days have been higher than normal for the city but still only a third of the global average for naturally occurring background radiation.