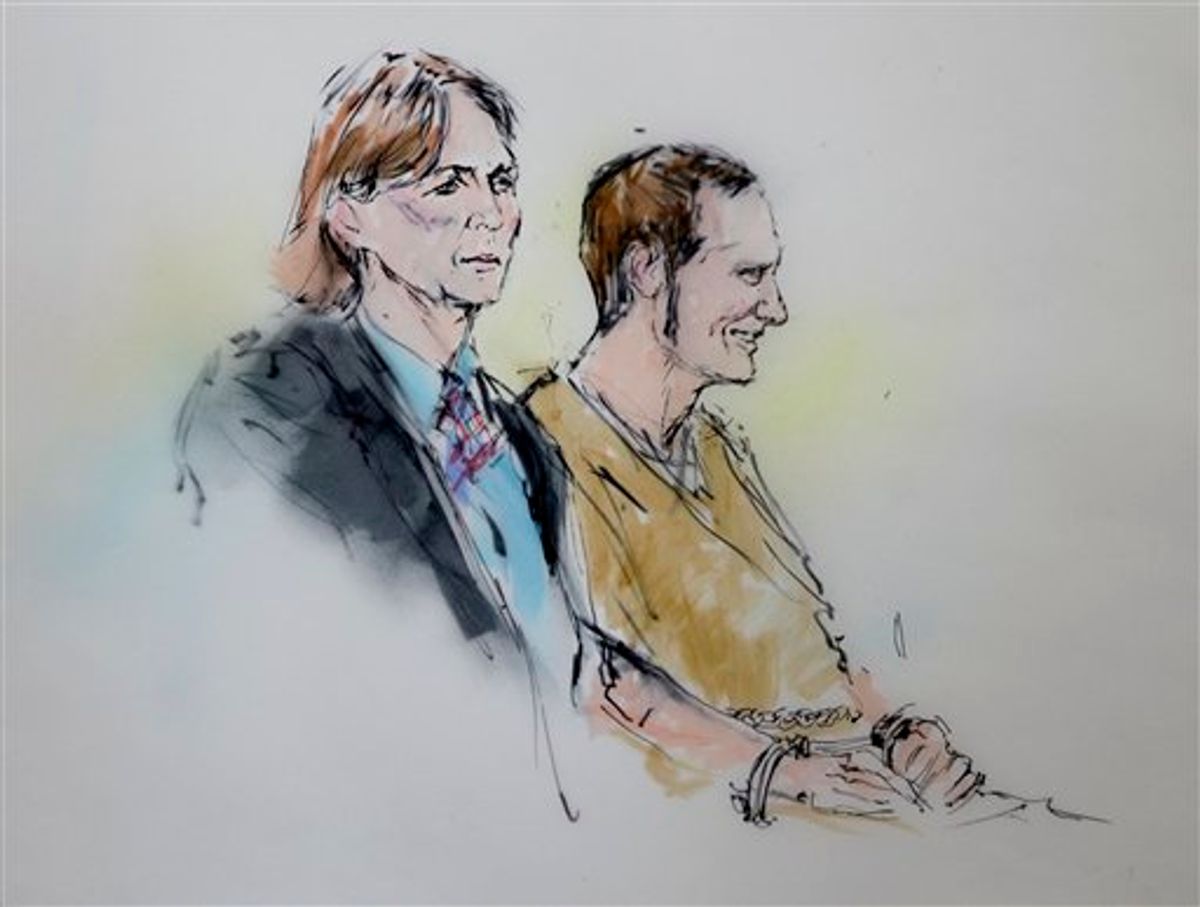 Attorney Judy Clark and defendant Jared Loughner stand before the judge in federal court Wednesday, March 9, 2011 in Tucson, Ariz. as shown in this artists' rendering. Suspected shooter Jared Loughner, who is charged with shooting U.S. Rep. Garbrielle Giffords, D-Ariz., and 18 others, was in court for a status hearing to consider whether to order the suspect in the Tucscon, Ariz., shooting rampage to give handwriting samples to compare with documents seized in a search of his home. (AP Photo/Bill Robles) (AP)
--

An Arizona judge on Monday ordered the suspect in the January shooting rampage in Tucson to undergo a mental evaluation at a specialized facility in Missouri as soon as possible.

The evaluation will be videotaped and provided to prosecutors and defense attorneys, U.S. District Judge Larry Burns said late Monday. The judge also ordered that it be conducted no later than April 29.

Prosecutors had argued that Jared Lee Loughner's exam should be conducted at a so-called medical referral center that provides forensic services and has increased resources, and recommended the federal Bureau of Prisons facility in Springfield, Mo.

Loughner's lawyers have said the exam should be done by an outside expert at a Tucson prison and wanted assurances that the evaluation doesn't expand into a review of their client's sanity. Lead defense attorney Judy Clark wrote in a court filing last week that moving Loughner would harm the defense team's efforts to develop an attorney-client relationship.

Loughner has pleaded not guilty to charges stemming from the Jan. 8 attack that killed six and wounded 13, including Rep. Gabrielle Giffords. She remains at a rehabilitation center in Houston as she recovers from a bullet wound to the brain.

Burns agreed that the Springfield facility is the best place for the exam, and ordered that the scope of the exam should be limited to whether Loughner is competent to stand trial, not whether he was sane at the time of the shooting.

"The question at issue is whether the defendant is presently suffering from a mental disease or defect rendering him mentally incompetent to the extent that he is unable to understand the nature and consequences of the proceedings against him, or to assist properly in his defense," Burns wrote.

He acknowledged that transferring Loughner would be inconvenient for defense attorneys but ruled that it is "unavoidable in light of the need to reliably and definitively resolve the question of the defendant's present competency." The judge also said the defense can visit Loughner while he is in Missouri.

Prosecutors have brought 49 counts against Loughner, including trying to assassinate Giffords, attempting to kill two of her aides, and killing U.S. District Judge John Roll and Giffords staffer Gabe Zimmerman. Loughner also is charged with causing the deaths of four others who weren't federal employees, causing injury and death to participants at a "federally provided activity" and using a gun in a crime of violence.

Many of the counts could bring a death sentence, but prosecutors have not announced if they will pursue that penalty. State charges are on hold until the federal case is complete but also carry the potential for the death penalty if Loughner is convicted.

Defense lawyers have not said if they intend to present an insanity defense.