The senator, who met with Moammar Gadhafi in 2009, now complains the dictator has "American blood on his hands" 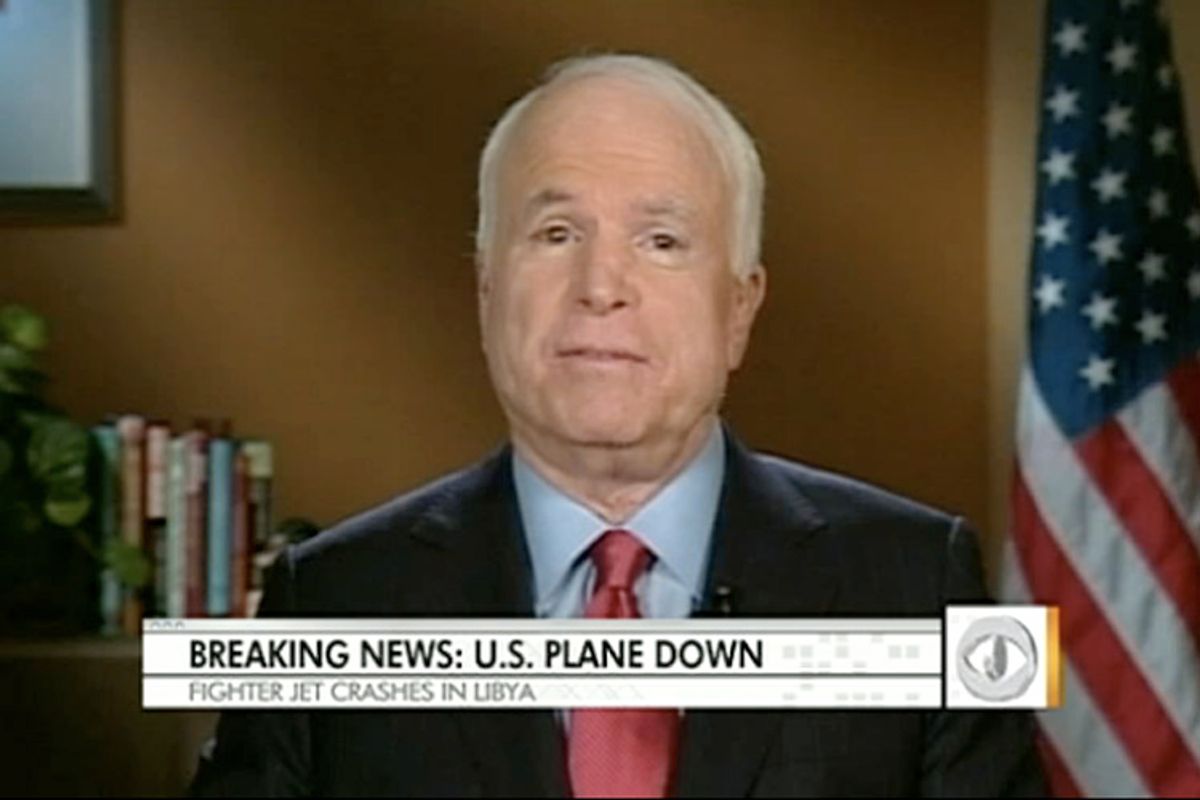 In a single interview this morning, John McCain managed to inadvertently highlight one of the potential dangers of the war against Moammar Gadhafi, while at the same time experiencing a bout of amnesia about his own record on Libya.

The Arizona senator was out front in recent weeks as one of the biggest proponents of a war with Libya, and is now calling for a wider mission, including arming the rebels.

Speaking on CBS' "The Early Show" today, McCain twice cited the fact that Moammar Gadhafi has "American blood on his hands" as a reason the U.S. should try to oust the dictator. McCain specifically referred to the 1988 Lockerbie bombing, which was indeed carried out by a Libyan agent.

What McCain is apparently forgetting is that, apart from the past few weeks, the last decade has been a period of rapprochement between the United States and Libya. It started with President Bush announcing in 2003 that Gadhafi had agreed to give up his "weapons of mass destruction" programs. In 2006 Bush removed Libya from the official list of state sponsors of terrorism. In September 2008 Condoleezza Rice traveled to Libya to have talks with Gadhafi. And just a few days before the 2008 presidential election, Bush signed a settlement under which Libya compensated families of victims of Lockerbie and other '80s-era attacks.

Who else was involved in the effort to forge better ties with Gadhafi? John McCain. In August 2009 he led a delegation of senators, including fellow hawks Lindsey Graham and Joe Lieberman, on a trip to visit the Libyan leader in Tripoli. Discussed during the visit was delivery of -- get this -- American military equipment to Gadhafi (a man with American blood on his hands no less).

"We discussed the possibility of moving ahead with the provision of non-lethal defense equipment to the government of Libya," the AP quoted McCain as saying at a press conference. McCain also noted that "ties between the United States and Libya have taken a remarkable and positive turn in recent years."

None of which is to say it was wrong to pursue better relations with Libya. But it's ironic that McCain is now citing the fact that Gadhafi has "American blood on his hands" as a reason to bomb Libya, considering McCain himself met with Gadhafi less than two years ago.

But there's another interesting nugget in the CBS interview with McCain this morning. Check out this exchange about arming the rebels:

HOST: If the goal then is to get him out, then does that ultimately mean that the U.S. could end up arming the rebels to make that happen?

MCCAIN: Oh, I think that that's very possible, and, in fact, I hope so. If not the U.S. through other countries. There's already reports that the Egyptians have been supplying them with some weapons. Not only giving them the weapons but it also requires some training. Hopefully some more of Gadhafi's army and military will come over to the side of the rebels. Look, for a long period of time the momentum was clearly on the side of the anti-Gadhafi forces. Then obviously they were pushed back ...

HOST: When you talk about your hope to actually arm the rebels, how confident are we that these folks -- that (a) we know who they are and that (b) they're not connected to some terrorist organization like Al Qaeda and will not ultimately turn on the United States and U.S. allies?

MCCAIN: Well, what we know of them so far obviously are that the former justice minister and others -- and a government has been formed, part of that government. But Gadhafi is a proven quantity. The blood of Americans is on his hands because he was responsible for the bombing of Pan Am 103. He has been involved in other acts of terror. And by the way it does take time, as it did during the period of the Russian occupation of Afghanistan. But we were able to provide them with some weapons and wherewithal to cause the Russians to leave Afghanistan. So we can do it.

So asked about worries that the anti-Gadhafi rebels may include anti-American elements, McCain approvingly cited the arming of anti-Soviet rebels in Afghanistan in the 1980s. Those rebels, of course, were the mujahedeen, among them Osama bin Laden.

It's worth noting that there is evidence that there may be anti-American extremists among the rebels in eastern Libya.

UPDATE: One of the WikiLeaks cables describes McCain's friendly meeting with Gadhafi in great detail.