"NCIS:LA" is unimaginative, simplistic and violent -- but the talented rapper makes it worth watching 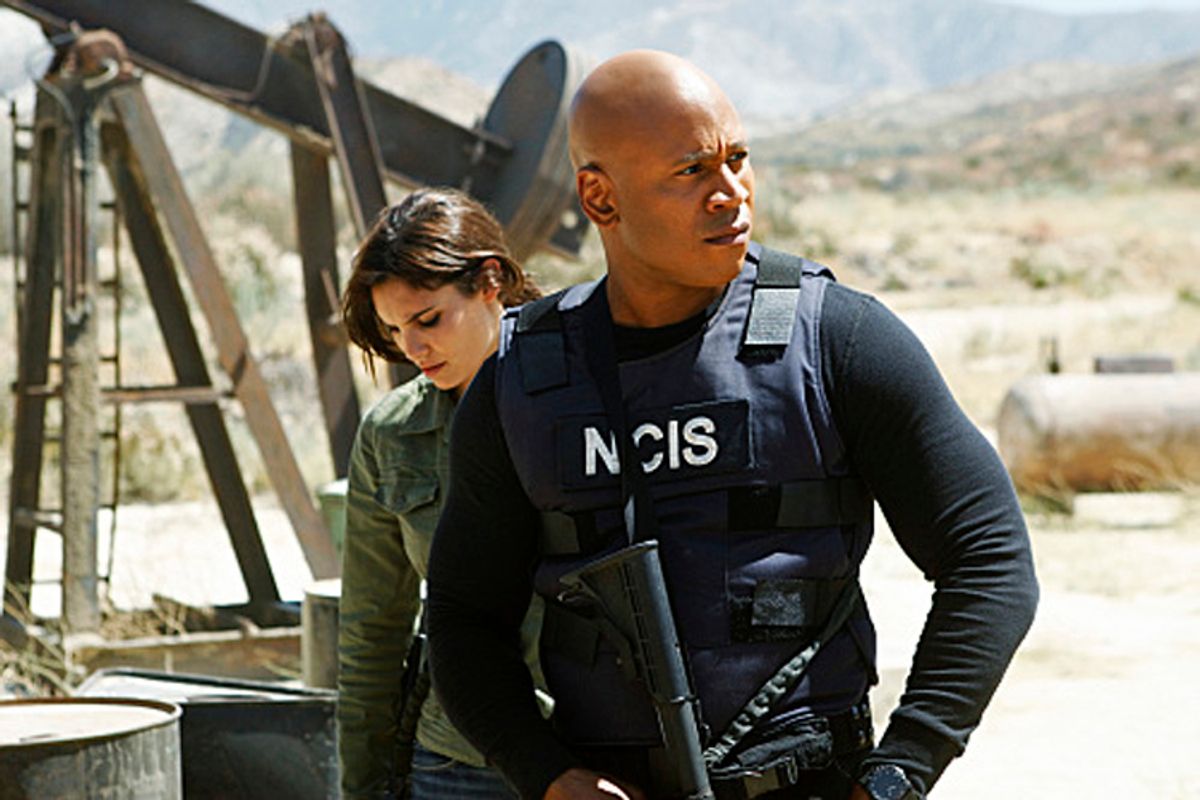 First things first: Nobody tunes into CBS' workhorse crime dramas for the acting. The innovations that revitalized scripted shows on other networks barely registered on this one. I'll never forget covering the twice-yearly TCA Press Tour about 10 years ago, right around the time that innovative cable dramas such as the "The Sopranos" began stealing Emmys from broadcast series, and hearing CBS executives and producers confess, publicly and privately, that they weren't too interested in serialized stories, or even in breaking new stylistic ground, because the old model was working fine for them. They decided the CBS brand was built on story-driven series with mostly self-contained plotlines that resolved themselves within the hour, and that you could sort of half-watch while doing laundry.

By and large, that's still the case. As I've written previously, CBS' prime-time lineup is built around crime shows that are glitzier and more violent than what it used to air in the 1980s, but no less simplistic and undemanding. They're bloody comfort food. The network's ability to anchor them with top-shelf character actors (Joe Mantegna, Gary Sinise, Laurence Fishburne, Forest Whitaker and the like) has got to be a matter of deep pockets; it's damn sure not the material, which wouldn't have taxed Fred Dryer back in the day. Some of these way, way, way overqualified stars work extra-hard to convince us that they're ACTING! There's a whole lot of soulful glowering and stammering and scenery-chewing going on; Whitaker, in particular, seems to be using his stint on "Criminal Minds: Suspect Behavior" as an excuse to rework his super-sensitive "empath" character from "Species."  Fishburne on "CSI" seems sullen and vaguely depressed; Sinise on "CSI: New York" looks really, really pissed at all times. They must feel they have to do something to differentiate themselves from the other actors, most of whom are interchangeable, blandly attractive 20- and 30-somethings. The conspicuous exception is Mantegna, whose "Criminal Minds" character usually seems like the most levelheaded professional in law enforcement -- but that might be because the show very rarely gives him anything to do but recite fortune-cookie aphorisms, taunt perps and grin at co-workers like a twinkly-eyed uncle.

All of which makes LL Cool J's work on "NCIS: Los Angeles" (Tuesdays 9 p.m./8 Central) seem borderline miraculous. This two-season-old spinoff of CBS' "NCIS" is another comfort food show, a weekly crime series about Navy investigators putting away serial killers, nabbing terrorists and solving crimes that involve corrupt or renegade government employees.  J's character, senior agent Sam Hanna, has as complicated, even tortured a back story as any of the "CSI" frontmen -- but he wears it more lightly. Although the show has gone somewhat light on details, we know Hanna grew up in a tough Brooklyn, N.Y., neighborhood, is at ease around what an old-time TV cop would call "the criminal element," and has plenty of experience as a combat veteran and undercover operative. (He served in Bosnia, Afghanistan and Iraq, among other places.) Although the decision to pair J with Chris O'Donnell, once the go-to actor for milquetoast preppies, seemed odd at first, they play off each other well, and I believe them as tightly bonded partners. But J's acting is so exquisitely modulated that it makes everyone, even the likable O'Donnell, seem to be phoning it in. On a series that treats most of its characters as exposition delivery devices at worst, plasticine action heroes at best, Sam Hanna stands out. He seems like a real person -- maybe the only completely credible human being in any of CBS' crime-time dramas.

Part of it is the way he carries himself. As Hanna, J walks and talks like a career military guy who came from humble circumstances and decided to make the armed forces his home, but who sometimes struggles to reconcile his outsider status as an African-American with his role as the status quo's defender. None of this is in the scripts; it's subtext that comes from J's casting, and from his acting choices. "NCIS: Los Angeles" often treats Hanna like the 21st century version of Linc on "Mod Squad" -- the guy who gets stuck with a lot of the gang and prison storylines because, well, he's black. J is a trooper, though. He gets into the stories and finds something real in them. And he never seems to be standing above them, passing judgment and trying to find a way to make the material more "interesting" by hamming it up.

A recent episode required Hanna to go undercover as a Muslim prisoner in a federal penitentiary to set up a plotline too complex to recount here; suffice to say that J was 100 percent credible not just as a former Navy SEAL who could speak fluent Arabic, but as a hardened criminal who distrusted groups of any kind, including the Muslim gang he was supposed to infiltrate. He was equally brilliant in a (tactically staged) fight with Aryan inmates, whirling and punching like the Tasmanian Devil in those old Warner Bros. cartoons. And he saved the best bit for last: a heart-wrenching close-up of Hanna discovering that the young man he'd gone undercover to save -- a former child soldier that Hanna brought back from a mission in Sudan -- had been wrongly fingered as the traitor in the gang's midst and murdered. The stunned horror on J's face as Hanna discovered the body exposed the vulnerability in this outwardly ironclad character. As another "NCIS: Los Angeles" character, operations manager Henrietta "Hetty" Lange (Linda Hunt), told him, "You can't save everybody."

Except, of course, when he can. Another Season 2 episode found Hanna trying to locate a Navy officer's daughter who had been kidnapped and buried alive by a maniac. (Yes, that plotline again; CBS is shameless.) The crime triggered an intriguing obsessive quality in Hanna because (as we found out in flashbacks) he had been buried alive with a partner during a mission in Bosnia. He eventually did save the girl, but there was more desperation than heroism in his quest. J put his broad-shouldered bulk to superb use, barreling through scenes like a human tank. Then, at the end, J had the good sense to underplay the moment when he told the rescued teen that she could repay him by doing a good deed for somebody else.  It was totally cornball, the kind of exchange that might have closed an old episode of "The Lone Ranger," but J made it seem natural. He doesn't have the pedigree of a Sinise or Fishburne, but he seems to have adopted Spencer Tracy's advice about acting as his credo: Never let them catch you at it.