A Portuguese colony in China, with African, Indian and British influences, Macau's food and life is fascinating 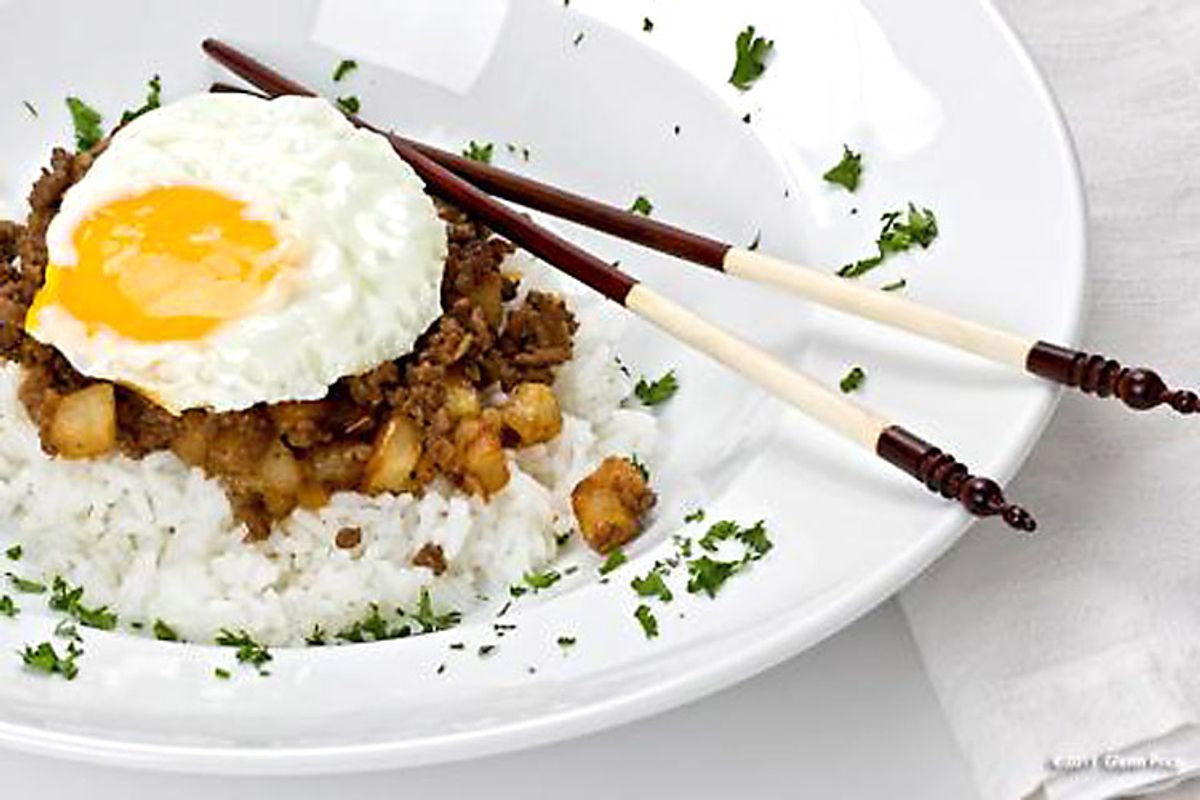 Every Asian American has to deal with The Question:

It wasn't until I was in high school that I finally realized why everyone was so baffled by my perfectly truthful one-word answer: "Pittsburgh!" I've grown to dread the time-sucking ritual of The Question. It's like answering, "So, how are you?" when you're in a really rotten mood: You can either tell people what they expect to hear and waste a few seconds or tell the truth and drive people insane while wasting epic amounts of time.

Sometimes, the temptation toward the latter is too great to avoid.

"No, where are you REALLY from?"

"Well, I was REALLY born in a community called Squirrel Hill. But I think it's technically still part of Pittsburgh."

This helpful clarification invariably leads to the question of where my parents are from. And this sucks me into yet another lengthy digression:

"Your mom is from WHERE?"

I could just say Mom is from Hong Kong -- it's not as if anyone actually cares. But part of me believes that even truly tedious people deserve to know about Macau -- a former Portuguese territory on the south coast of China, just west of Hong Kong -- for it's a genuinely wondrous place. Wondrous enough to make me want to stand around explaining my ancestry to total strangers.

How could any place possibly be this awesome? First, there's the architecture: Picture a medieval Mediterranean seaside village, complete with the ruins of its own 17th-century cathedral, plunked down only an hour from Hong Kong. Then there's the area's history, as intriguing to explore as its architecture. But most important, there's gambling, sex, drugs and 16th-century Asian fusion cuisine. What's not to love?

A few anecdotes from my family history will illustrate some of these defining cultural features in action.

1. Gambling! On my first visit to Macau -- and Mom's first visit home in years -- we made the obligatory stop at Casino Lisboa, the best-known, and at the time, biggest and grandest of Macau's apparently not-so-famous casinos. (Growing up, I thought EVERYONE knew that Macau was the Monte Carlo of the Far East, the place favored by high rollers from Hong Kong or Tokyo looking for a weekend of decadent debauchery.)

My Aunt Susie led my barely college-age sisters and me across the floor, past the baccarat tables, roulette wheels and trilingual (Chinese/Portuguese/English) NO PERSONS UNDER 21 ALLOWED signs to the slots. Then she handed us each a Hong Kong dollar coin.

Then we noticed a stern-faced security guard closing in on my baby sister Sondra, who was then about 18 but looked closer to 15.

"Now we're in trouble," one of my other sisters muttered.

Within seconds, the guard was at Sondra's side. He said something in Cantonese, plucked the coin from her hand -- then stuck it into the slot machine in front of her and motioned for her to pull the handle. Then he handed her another coin.

What happens in Macau, stays in Macau.

2. Sex! One of my proudest moments in elementary school was the day my classmates and I got to present our family trees, which we'd spent the previous week researching and designing. Everyone else's trees showed polite, symmetric pairings of circles and triangles: Grandpa met Grandma in Belarus, they immigrated to New York. Boring.

My tree -- at least on Mom's side of the family -- was a proud tangle of depravity. There was Grandpa and Grandma, and underneath them, my mom, two aunts and one uncle. But directly next to Grandma were Grandpa's three other wives/concubines (their exact legal status was never clear to me) and underneath them, their own children -- Mom's half-siblings. Grandpa supported each of my "grandmas" in a separate house and circulated among them regularly. One of my aunts later told me that he tended to drop by their place during the mid-afternoon. He spent most of their visits, she said, sequestered with Grandma in her bedroom. Ahem.

3. Drugs! I never met my maternal grandfather. He never traveled to the U.S. as far as I know, and I never had the chance to visit Macau until years after he died. But even when he was alive, he was a shadowy figure to me. I knew he was well off; he had to be to maintain four separate households simultaneously, and Mom sometimes reminisced dreamily about her childhood in a three-story house with marble bathrooms and several servants.

But when I was growing up, no one would give me a straight answer about exactly what he did for a living. Sometimes they said he was in business. What kind of business? Medicine. Was he a doctor, like Dad? Or a pharmacist, like all my older cousins? No, it was different kind of medicine. They don't make it anymore.

Well, it turns out they do. I found out much, much later that he dealt in opium. But saying Grandpa dealt in opium is a bit like saying Bill Gates works in software. Grandpa held Macau's sole opium franchise; essentially, he was a one-man cartel. Until the mid-1940s, this was fully legal in Macau, not to mention obscenely profitable. And like most successful drug kingpins, Grandpa never touched the stuff himself.

And to think I used to envy "normal" kids with cuddly grandfathers who'd sit in rocking chairs and whittle stuff for them out of willow twigs.

The wonders of Macanese cooking are a reflection of Macau’s long and lively colonial history. Unlike the British in neighboring Hong Kong, who kept a strict social distance from their Chinese subjects, the Portuguese in Macau were happy to embrace the locals -- literally. Intermarriage was common, as was the mixing of languages and cultures. During my childhood, I was once surprised by a blond, green-eyed woman running toward us in Chinatown, calling joyfully to Mom in fluent Cantonese. It was an old friend from Macau. When we visited Macau, we met another family friend, a Portuguese-Chinese woman everyone knew as "21": Her Portuguese father had adopted the local habit of taking multiple wives, and she was his 21st child.

The food is yet another result of this raucous mix. Our meals in Macau reflected the best of East and West, joyfully combined: meals came with rice AND crusty bread, chopsticks AND forks, tea AND Portuguese vinho verde -- all in copious quantities. The cooking showed a mix of European techniques -- lots of grilled seafood, braises, and casseroles -- and Chinese flavors, augmented by African and Indian influences, a reflection of Macau's former prominence as a stopping point on Eastern shipping routes. Bay leaves and soy sauce can appear seamlessly in the same dish. Curried crabs, grilled sardines brushed with olive oil, and African chicken (a blackish spice-rubbed chicken dish not found anywhere in Africa) can all be found on the same table at the same time, if one is lucky enough.

Francis Lam recently noted that there is no one perfect cuisine in the world: Chinese cuisine, for all its wonders, is weak in desserts, for instance. But Macanese cuisine comes pretty close to being the total package: It boasts the vibrancy of Eastern and tropical spices combined with European rib-sticking heartiness overlaid with distinctive Chinese flavorings -- topped off with local versions of egg- and butter-rich Portuguese-influenced sweets for dessert.

In short, Macanese cooks invented Euro-Asian fusion cuisine almost half a millennium ago.

A quick and easy dish that exemplifies the hearty, homely East-West mix that is Macanese home cooking in minchee: a simple, savory meat-and-potato hash seasoned with soy sauce and spices. Minchee, like so much else in Macau, reflects a cross-cultural mix, which in this instance includes an English influence from nearby Hong Kong: the word "minchee" is a Cantonese corruption of the English word "mince," and this version contains a very English ingredient, Worcestershire sauce. Like much Macanese cuisine, it's a family dish, designed to satisfy and comfort, rather than to surprise or impress.

After all, if you want to be surprised or impressed in Macau, all you have to do is put down your fork or chopsticks and step outside.

I wish I could say this recipe came to me handwritten on a scrap of parchment in Macau Creole by my great-great-great grandma, but because Mom was raised in a household where hired guns did all the cooking, she never learned any local recipes growing up. The recipe that follows is adapted from "Taste of Macau: Portuguese Cuisine on the China Coast" by Annabel Jackson, and seems to be close to the one Mom described from her youth.