Gay icon, screen siren, devastator of men -- for all her majesty, the actress was also, surprisingly, human 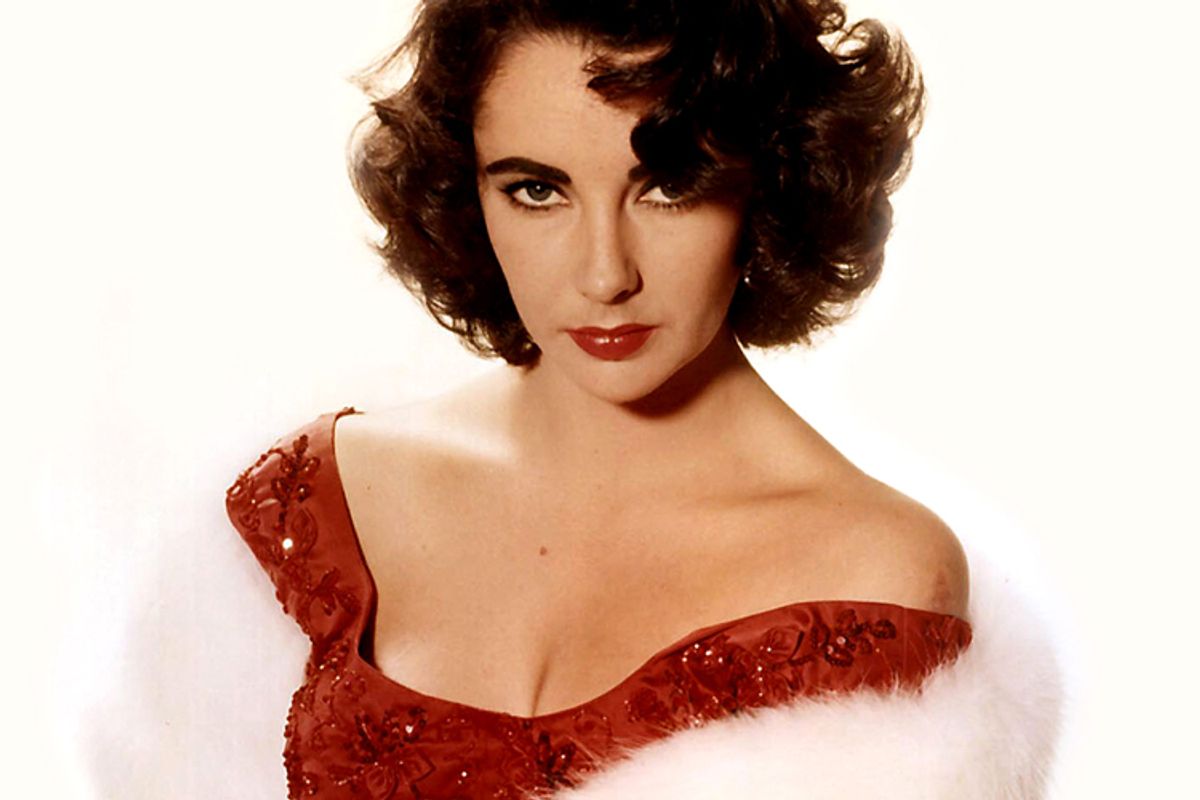 Last week, in Miami, I stayed at a self-described "gay hotel," mostly for the kicky interior: Every room featured, over the bed, an enormous photo portrait of Elizabeth Taylor as Cleopatra. She was, after all, the ultimate queen.

A friend of mine in his 60s once told me the story of accidentally running into Elizabeth Taylor with her entourage in an alley in New York. He was a successful model and Princeton architect -- no stranger among beautiful people. But the sight of Elizabeth, even in the mid-'70s (when the wattage of her once perfect beauty was already slightly dimmed), was, the way he described it, something like being shot with a gun in the chest by Beauty itself. It wasn't just her fearful symmetry, or her big-bang eyes, but the power of her being, the animation of her character. For him it was life-altering -- in a lifetime of looking at art, that split-second encounter in a New York alley was still the encounter with beauty that left him most dumbstruck, some 30 years later. What he felt for Elizabeth Taylor instantly was something akin to the seismic power of pure love.

Like uranium, Elizabeth Taylor was an unstable element that could be variously refined unto many enormous potentialities. She was a weapon of mass obsession that could be deployed as a means of focusing tsunamis of international money. She was a love bomb -- and, like any bomb, the very fact of her existence was a phenomenon that demanded a certain severe, almost Calvinist moral scrutiny. Such power, after all, is terrifying -- and the tabloids never seemed quite so grateful as when the person hardest hit by Elizabeth Taylor's own radioactive fallout was Taylor herself.

Elizabeth Taylor wasn't a celebrity so much as a part of cultural consciousness with as much resonance as an established religion or a letter of the alphabet -- an impossible equation that really irritated the scientific mind in people, since she was always considerably more than the sum of her parts. Her majesty both inflamed and infuriated men (for whom she had a crippling weakness and compulsion to collect).

Richard Burton kept his twice-wed wife in line by undermining her. The New York Times obituary this morning had this ghastly quote:

The notion of (Richard Burton's) wife as "the most beautiful woman in the world is absolute nonsense," he said. "She has wonderful eyes," he added, "but she has a double chin and an overdeveloped chest, and she's rather short in the leg."

This, I think, was how Burton kept his own ballast: by breaking Elizabeth down into criticizable parts -- bruised fender, bad hubcaps -- he could teasingly deny her the satisfaction of his comment on her as a total driving experience. He couldn't acknowledge all the power she had under the hood. It probably would have pleased her too much, and upset their ongoing libidinous struggle to passionately conquer each other.

Elizabeth Taylor's collaboration with life compelled her to suffer: as if to atone for her wealth, and smite her own perfect appearance. But these catastrophes created, ultimately, a common experience and parity with her audience. Of all people, Elizabeth Taylor is not a star that should have had the Common Touch, but she did. She was, in a sense, her own portrait of Dorian Gray -- a walking, talking Faustian contract replete with whiplash plot points and reversals of fortune that might have killed someone not so well grounded in their own humanity (like her dear young friend Michael Jackson).

The friendship she shared with Jackson, which seemed so utterly bizarre in the 1980s, seems less so now: They were both declawed jaguars kept as ornaments dead center in the dictatorship of fame. Their lives had been deprived of any semblance of normalcy -- but the suffering of human life is unavoidable, even for stars of such magnitude. There is no cure for life, and this is where they must have been a comfort to each other. Michael did not have Elizabeth's fortitude of ego or breadth of character; he was, in the end, tragically incapable of being a mere human being -- but humanity was Elizabeth Taylor's fallback position, and her saving grace.

She was the only conceivable human embodiment of Cleopatra, and, offscreen, a sick, lonely, grieving person of weak constitution, prone to grave illnesses and emotional disasters. She was the impossible luxury of White Diamonds (one of her many fragrances) -- and she used this wild surplus of personal glamour to champion AIDS back in the earliest days, when it was still perceived as the most frightening stigma on earth -- the bubonic plague of sexual deviants -- when no other persons of rank and profile had the balls to publicly acknowledge it, let alone lend their full weight to raising money for medical research.

When Elizabeth Taylor's full power was unleashed on-screen, her portrayals were more than the sum of acting: She was capable of engraving herself in certain emotional states on your consciousness forever, to the point of symbolizing them.

Her chemistry with Montgomery Clift was so palpable in "A Place in the Sun," you can practically taste both the honey and the razor blade of blinding new love on your own tongue.

The itchy quality that Elizabeth brought to the role of Maggie the Cat in "Cat on a Hot Tin Roof" traversed the screen and became the shorthand for that eternally wretched feminine state of gnawing, incurable desire -- that devouring inner combustion that comes of wanting more from your experience of love than your love object is capable of delivering.

Her very first breakthrough role, in "National Velvet," crystallized the sincere innocence and honesty of a teenage girl in love with her horse, riding to the very limits of her strength right into the fiery mess of life, with all its fear and pain and hope -- sweetly, bravely, with inspiring optimism. Elizabeth Taylor seemed to preserve this courageous innocence in herself offscreen, through whatever life handed her: hails of rose petals and diseases and pills and divorces and savage indignities like John Belushi. Her acting worked so well because she was truthful with herself, and with us -- a real, honest citizen who cheerfully bore the punishments of her life while showing no bitterness and protecting no vanity.

Various mystical cosmologies speak of the spiritual goal of dissolving into union with the rest of everything -- a process that is usually achieved through the dismantling and gradual erosion of the ego, unto enlightenment (or its cultural equivalent).

Even at the center of attention in Hollywood, Elizabeth Taylor was never too precious to protect herself from ego plunder. She engaged with life on its own terms, even as it periodically killed her hopes and her looks and her love life and her health and her reputation. Ultimately, she was unperturbed, and unshakably generous in her good humor, particularly when the jokes were at her expense. She bravely put her best chin forward and gave life the simple love of an honest, human, achingly beautiful young girl.

Elizabeth Taylor was an impossible vision driving by in a dreamy convertible that every girl wants to be and every boy wants to marry. She leaves in her wake a dazzling aura, a lingering whiff of perfume, a red-hot sexual need and an enduring, indestructible ability to inspire love.