What I left behind in Japan

My family and I fled the ravaged country for safety here. But I can never tear myself away completely 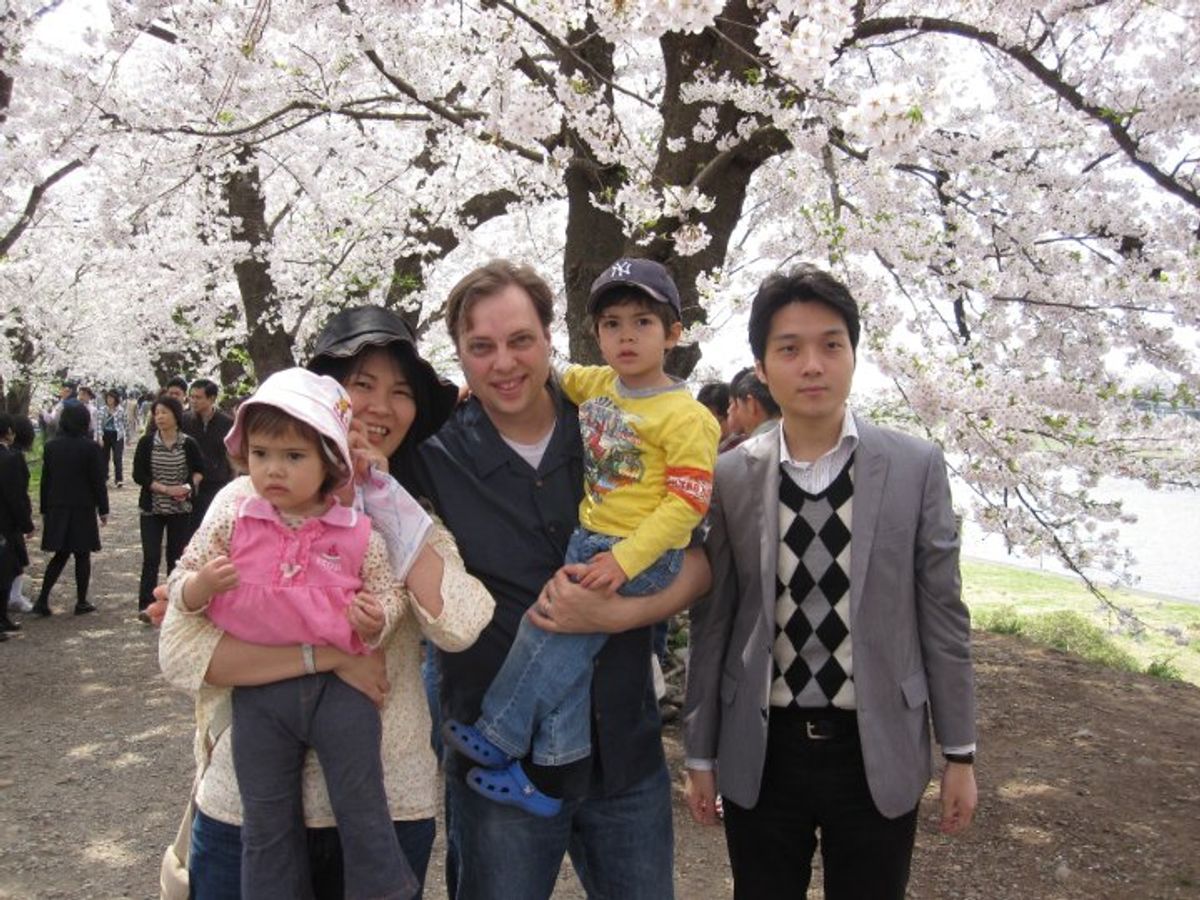 The author, center, with his wife, two children and brother-in-law.
--

It had been a long week when I boarded a Korean Air flight from Akita to Incheon with my wife and two small children. Having been drained of our collective spirit, and concerned with the sudden instability of our lives, it seemed a logical move to relocate temporarily to the United States. After all, it’s not all that difficult a choice to exchange a wintertime environment of potential resource rationing, suspension of public services, and multiple, frequent aftershocks for a budding spring in suburban Pennsylvania surrounded by relatives. The choice becomes particularly clear when it involves children aged 2 and 4. Still, leaving our home of seven years in the midst of crisis meant bringing heavy hearts aboard our flight, in addition to our carry-on bags. Prior to our departure, several international universities had asked their study abroad communities to return home and it was becoming increasingly likely that the United States Embassy would ask families of their employees to do so as well. We departed somewhere in the middle of the process, as it turns out.

Akita Prefecture neighbors both Iwate and Miyagi Prefectures to the west, sharing an enormous national park along the border on one side and uniting with the Sea of Japan on the other. Typically, Akita experiences long, cold winters and intensely humid summers, thanks to its position along the jetstream associated with Siberia. It’s not what one would describe as mild, although the people of Akita are welcoming and warm in a way that softens the edges of the climate and balances the spirit of the place. The entire Tohoku region is marked by craggy mountain peaks, wide expanses of rice fields, and small coastal fishing communities. Most of the economy of the region is agrarian in some way, with important contributions from the forestry and fishing industries as well. Our home in Akita City is a two-hour drive from Sendai, and not much more to the area of Fukushima affected by the crisis at the nuclear plant. No more than 150 miles, as the crow flies, lie between us, although a range of fairly high mountains splits the region down the middle. The distance to the most severely affected areas of the Pacific coast is relatively long from a geographic perspective, but psychologically Akitans may as well live down the street.

During my roughly seven years as a citizen of Akita, I was fortunate to make close associations with the people of Tohoku and adopted its rhythm as my own. As an educator, my work began amid small children and later evolved to the university level. The experiences I shared with the people in my classrooms proved that the roles of teacher and student are blurry at best. Many of the individuals who have touched my life during these years have been the sons and daughters of Iwate and Miyagi Prefectures, and occasionally have hailed from Fukushima as well. As a citizen of Tohoku, there is no escaping the interconnectedness that the region seems to encourage. It is this aspect of the recent crisis that has been most difficult to reconcile for me, and the source of the greatest distress in having left my people behind. My own family is significantly attached to the community as well, with two children born and raised in Akita, a 4-year-old son and a 2-year-old daughter. My wife, Ari, was born in Tokyo, grew up in central Japan, and later pursued higher education in New York, where we met more than 10 years ago. It was for her work that we initially moved to the north of Japan.

On the plane, an exhausted woman sat beside us holding an infant of 5 months. The baby’s cheeks were plump and red and one would never suspect the troubles he’d endured over the preceding week. The mother had married a South Korean man, and was fortunate enough to be bused out of Sendai by the government of that nation. She would be spending time in her husband’s native land while regrouping her family and her life. They had been forced out of their home by the earthquake and deprived of the basic necessities of life as a result of the devastation left behind by the tsunami. The woman related that they had not bathed in a week and were only able to collect two liters of water per day at the local public park during the aftermath of the disaster.

Our situation was less severe, and I almost felt guilty at my own angst when hearing her terrible ordeal. I had been sitting on my couch at home when the shaking began. Almost five minutes of tremendous shaking put a start into me, as Akita is generally spared earthquakes beyond the mildest of intensity. Still, nothing had fallen off the shelves and I lazily decided to stay in place on the sofa, rather than duck and cover as we're taught. As I consulted the television news and learned of the severity of the quake on the Pacific side of the island, the power was cut. It was at that point I began to feel deeper concern. My Japanese cellphone features a five- or six-channel television function, which I’d always considered a useless and unnecessary excess. It became an important lifeline in the hours after electricity abandoned us, and I was able to watch events unfold with my wife at my side, eyes fixed on the tiny screen. Our neighborhood remained eerily dark as snow began to fall in the early evening of our first night without power. Our children were safely settled at their daycare less than two miles from home and important preparations had to be made. We went through the entire disaster routine, including filling the bath with water, checking for canned and dried foods, and gathering up the battery-powered radio to listen for important updates and information.

The following day, an early morning start began with a quick scout of the neighborhood to see if the convenience stores had opened and if there were any signs of life at local stores. Throughout that day, limited access to resources became apparent and long lines in front of supermarkets were not uncommon. There was an orderly character to the scene and while conversations revealed real worry, spirits remained firm and thoughts were as much on the people in Iwate and Miyagi as the local community. Similar concern grew for the people of Fukushima as the events unfolded at the nuclear facility along the Pacific coast. It was days before real science emerged in the public discourse to quiet the growing fears of a Chernobyl-like outcome in Fukushima, and until then the worsening news took its toll on everyone, in particular the expat community who began to speak openly of retreat. Often concern was for young children, and I expect there were many conversations around kitchen tables resembling those held in our own home.

As it stands today, most of our friends and colleagues in Akita have elected to wait out the troubles and have rallied around one another in support. For those more invested in the community, with more permanent roots, the choice to wait out the storm is absolute. Japanese culture reflects a historical appreciation for the impermanence of the environment. The poetry of Japan is marked by its celebration of the distinct seasons and the cycle of change they represent. Love, life, death and the many mysteries of our existence are represented metaphorically in the change of seasons. There is a resolve to impermanence and even a subtle appreciation of it. It would be crude to suggest anything poetic about the circumstances of the Japanese crisis, but the poetry of the people will most certainly guide them. Suffering is impermanent as much as is joy. Japan, more than any place I know, understands this and will be healed by it. In the meantime, my thoughts will never leave my adopted home, even as I enjoy the comfort of my first and native land. My heart is with my family, friends and community in Japan and I long to be reunited with them in better times. Our separation, after all, is sure to be impermanent with eyes already fixed on a day in the near future when we will join our community in better days.

Mike Plugh is currently a doctoral student in Temple University’s Mass Media and Communication program and a part-time resident of Akita Prefecture, Japan.