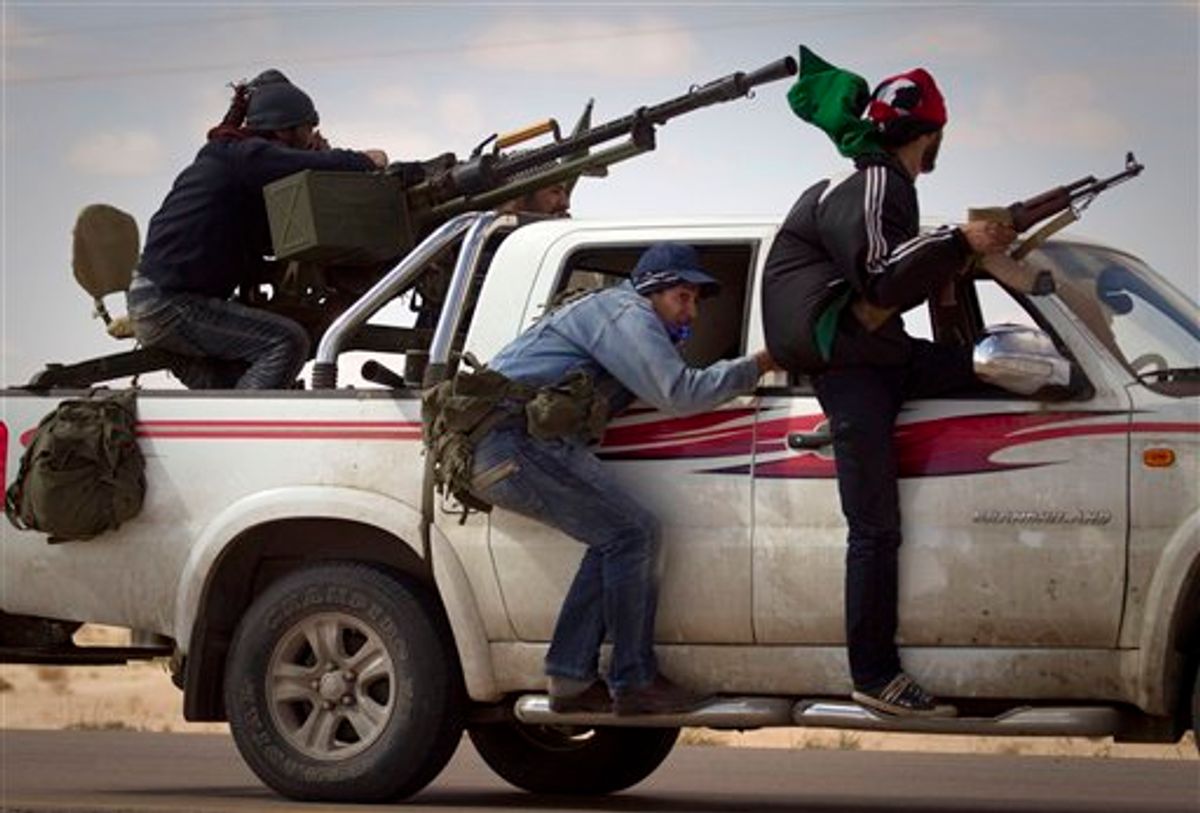 Libyan rebels retreat as mortars from Moammar Gadhafi's forces are fired on them on the frontline of the outskirts of the city of Ajdabiya, south of Benghazi, eastern Libya, Tuesday, March 22, 2011. Coalition forces bombarded Libya for a third straight night, targeting the air defenses and forces of Libyan ruler Moammar Gadhafi, stopping his advances and handing some momentum back to the rebels, who were on the verge of defeat just last week. (AP Photo/Anja Niedringhaus) (AP)
--

Moammar Gadhafi's forces intensified the shelling of rebel positions outside a strategic eastern city Wednesday as they fought to prevent the opposition from taking advantage of the 5-day-old international air campaign to regroup in the east.

Western diplomats, meanwhile, said an agreement was emerging where NATO would take responsibility for a no-fly zone over Libya after the United States -- which has effectively commanded the operation until now -- reiterated that it was committed to the transition.

NATO warships were to begin patrolling off Libya's coast Wednesday to enforce the U.N. arms embargo.

In what has become a common pattern, pro-Gadhafi troops who have besieged Ajdabiya -- a city of 140,000 that is the gateway to the east -- attacked a few hundred rebels gathered on the outskirts. The rebels fired back with Katyusha rockets but have found themselves outgunned by the Libyan government's force.

Plumes of smoke rose over the city's skyline.

"The weapons they have are heavy weapons and what we have are light weapons," said Fawzi Hamid, a 33-year-old who joined the Libyan military when he was younger but is now on the rebels' side. "The Gadhafi forces are more powerful than us so we are depending on airstrikes."

The rebels and Gadhafi's forces have been locked in a standoff over Ajdabiya for more than a week, with neither side able to muster enough force to take the city outright.

Libyan state TV broadcast what it said was live coverage of Gadhafi's less-than-five-minute statement. Standing on a balcony, he denounced the coalition bombing attacks on his forces.

"O great Libyan people, you have to live now, this time of glory, this is a time of glory that we are living," he said.

State TV said Gadhafi was speaking from his Bab Al-Aziziya residential compound, the same one hit by a cruise missile Sunday night. Reporters were not allowed to enter the compound as he spoke.

Heavy anti-aircraft fire and loud explosions sounded in Tripoli after nightfall, possibly a new attack in the international air campaign that so far has focused on military targets. Two explosions were heard in the city before daybreak Wednesday.

One of Gadhafi's sons may have been killed, U.S. Secretary of State Hillary Clinton told ABC News on Tuesday. She cited unconfirmed reports and did not say which son she meant. She said the "evidence is not sufficient" to confirm this.

Clinton also told ABC that people close to Gadhafi are making contact with people abroad to explore options for the future, but she did not say that one of the options might be exile. She said they were asking, "What do we do? How do we get out of this? What happens next?"

Most of eastern Libya is in rebel hands but the force -- with more enthusiasm than discipline -- has struggled to take advantage of the gains from the international air campaign, which appears to have hobbled Gadhafi's air defenses and artillery and rescued the rebels from impending defeat.

The coalition includes the U.S., Canada, several European countries and Qatar. Qatar was expected to start flying air patrols over Libya by this weekend, becoming the first member of the Arab League to participate directly in the military mission.

The Obama administration is eager to relinquish leadership of the hurriedly assembled coalition, but divisions have emerged over who would take over.

A compromise proposal would see NATO take a key role in the military operation guided by a political committee of foreign ministers from the West and the Arab world. Officials said the North Atlantic Council -- NATO's top decision-making body which already has approved military plans for enforcing the no-fly zone -- may decide to start them later Wednesday.

Spanish Defense Minister Carme Chacon endorsed the proposal for handing over control of the Libya operation to a political committee. "We are comfortable with that," she said.

Associated Press writers Maggie Michael in Cairo and Slobodan Lekic in Brussels contributed to this report.