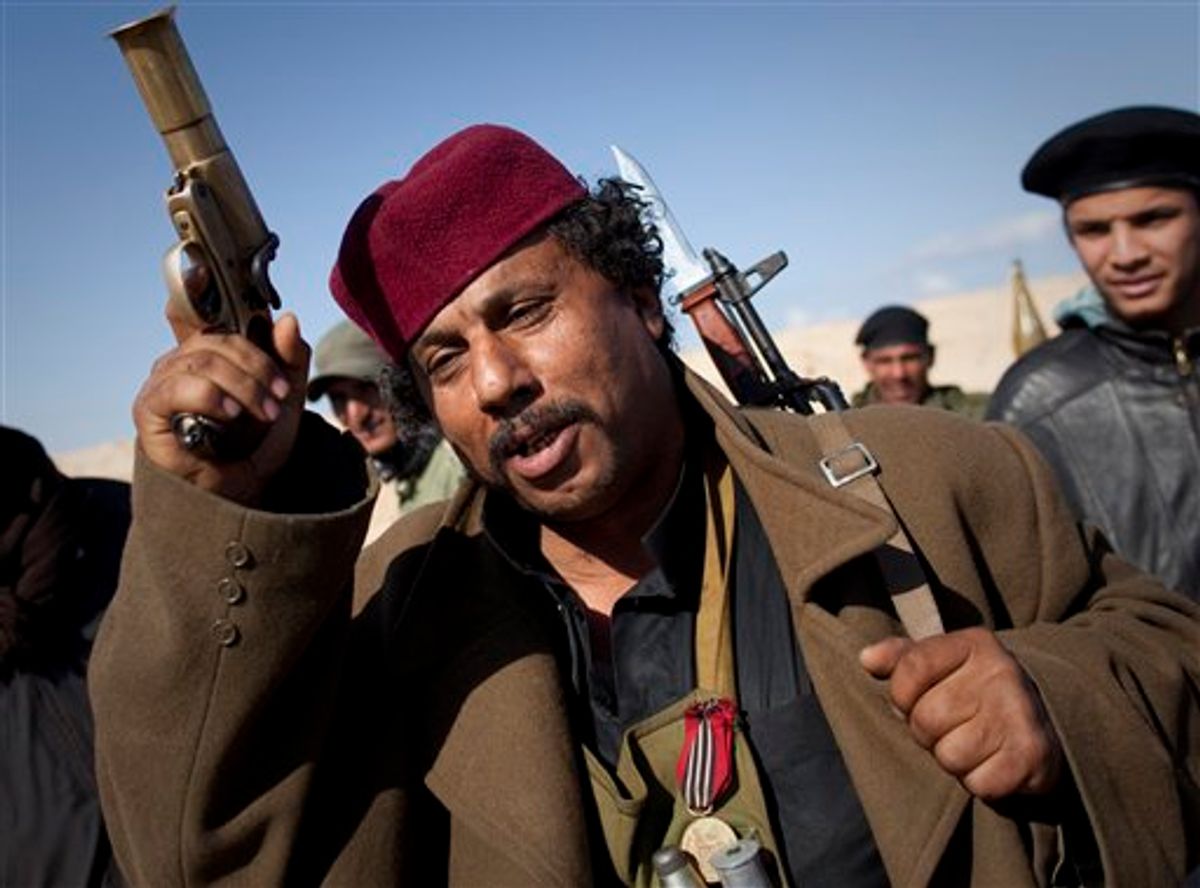 A Libyan rebel gestures before moving closer to the frontline after Moammar Gadhafi's forces fired on them on the frontline of the outskirts of the city of Ajdabiya, south of Benghazi, eastern Libya, Tuesday, March 22, 2011. (AP Photo/Anja Niedringhaus) (AP)
--

International airstrikes forced Moammar Gadhafi's tanks to roll back from the western city of Misrata on Wednesday, a local doctor said, giving respite to civilians who have endured more than a week of attacks and a punishing blockade. In the east, rebels tried to organize politically and militarily as civilians fled another strategic city.

As the international air campaign appeared to weaken Gadhafi's forces even in the western region that has been his stronghold, Western diplomats neared an agreement to let NATO assume responsibility for the no-fly zone and its warships began patrolling off the Mediterranean coast. Both they and rebels, who took tentative steps toward forming a government in the east on Wednesday, appeared to be preparing for a battle that could last some time.

The international coalition continued airstrikes and patrols early Wednesday, but the report that Misrata was targeted could not immediately be confirmed. U.S. Navy Adm. Samuel J. Locklear, the on-scene commander, said Tuesday the coalition was "considering all options" in response to intelligence showing troops were targeting civilians in the city, 125 miles (200 kilometers) southeast of Tripoli.

A doctor in Misrata said the tanks fled after the airstrikes began around midnight, giving a much-needed reprieve to the city, which is inaccessible to human rights monitors or journalists. He said the airstrikes struck the aviation academy and a vacant lot outside the central hospital, which was under maintenance.

"There were very loud explosions. It was hard to see the planes," the doctor said, speaking on condition of anonymity for fear of reprisals if Gadhafi's forces take the city. "Today, for the first time in a week, the bakeries opened their doors."

He said the situation was still dangerous, with pro-Gadhafi snipers shooting at people from rooftops.

"Some of the tanks were hit and others fled," he said. "We fear the tanks that fled will return if the airstrikes stop."

Gadhafi made his first public appearance in a week late Tuesday, hours after explosions sounded in Tripoli. State TV said he spoke from his Bab Al-Aziziya residential compound, the same one hit by a cruise missile Sunday night. "In the short term, we'll beat them, in the long term, we'll beat them," he said.

The withdrawal of the tanks from Misrata was a rare success for the rebels. The disorganized opposition holds much of the east but has struggled to take advantage of the gains from the international air campaign, which appears to have hobbled Gadhafi's air defenses and artillery just as the rebels were facing defeat.

Neither side has mustered the force for an outright victory, raising concerns of a prolonged conflict in the cities were they are locked in combat, such as Misrata and Zintan in the west and Ajdabiya, a city of 140,000 that is the gateway to the east.

In Zintan, a resident said Gadhafi's forces were at the base of a nearby mountain and were shelling in that area, but rebels forced their retreat from all but one side of the city. After five days of fighting, resident Ali al-Azhari said, rebel fighters captured or destroyed several tanks, and seized trucks loaded with 1,200 Grad missiles and fuel tanks. They captured five Gadhafi troops.

Al-Azhari, who spoke to The Associated Press by phone from the city, said one officer told rebels he had order "to turn Zintan to a desert to be smashed and flattened." Resentment against Gadhafi runs high in Zintan, a city of 100,000 about 75 miles (120 kilometers) south of Tripoli, because it was the hometown of many of the detained army officers who took part in a failed coup in 1993.

Pro-Gadhafi troops who have besieged Ajdabiya attacked a few hundred rebels on the outskirts Wednesday. The rebels fired back with Katyusha rockets but have found themselves outgunned. Plumes of smoke rose over the city, which is 95 miles (150 kilometers) south of the de-facto rebel capital of Benghazi.

"The weapons they have are heavy weapons and what we have are light weapons," said Fawzi Hamid, a 33-year-old who joined the Libyan military when he was younger but is now on the rebels' side. "The Gadhafi forces are more powerful than us so we are depending on airstrikes."

People fleeing the violence said the rebels controlled the city center while Gadhafi's forces were holding the outskirts.

"The pro-Gadhafi forces are just shooting everywhere. There is no electricity, the center of the city has been totally destroyed, even the hospital has been hit," 28-year-old Hafez Boughara said as he drove a white van filled with women and children on a desert road to avoid the main highway.

Mustafa Rani, 43, who was driving a hatchback with seven small children and his wife, described heavy shelling and shooting.

In Benghazi, the defacto capital of the uprising, the rebel council created a governing body in a new effort to organize the often-chaotic movement.

Rebel spokeswoman Iman Bughaigis said the leader of the governing body would be Mahmoud Jibril, a U.S.-educated planning expert who defected from the Gadhafi regime as the uprising gained momentum.

Bughaigis said the move reflected the rebel realization that they needed better organization.

"At the beginning, we thought it would just take a week or two weeks" to depose Gadhafi, she said. "Now we know it will take time. We need a government to liberate the eastern territories. It was just because there was a vacuum. We don't have political experience. We are learning as the days go by. Now there is an understanding that we need a structure."

Gadhafi was defiant in his first public appearance in a week late Tuesday, promising enthusiastic supporters at his residential compound in Tripoli, Libyan state TV broadcast what it said was live coverage of him standing on a balcony as he denounced the coalition bombings.

"O great Libyan people, you have to live now, this time of glory, this is a time of glory that we are living," he said.

Heavy anti-aircraft fire and loud explosions sounded in Tripoli after nightfall, possibly a new attack in the international air campaign. Two explosions were heard in the city before daybreak Wednesday.

Libyan state TV showed footage of a house that was demolished and burning. Weeping women slapped their faces and heads in grief while men carried a barefoot girl covered in blood on a stretcher to an ambulance. A man screamed "a whole family was killed." The TV labeled the footage as "the crusader imperialism bombs civilians."

One of Gadhafi's sons may have been killed, U.S. Secretary of State Hillary Clinton told ABC News on Tuesday. She cited unconfirmed reports and did not say which son she meant. She said the "evidence is not sufficient" to confirm this.

Clinton also told ABC that people close to Gadhafi are making contacts abroad to explore options for the future. She said they were asking, "What do we do? How do we get out of this? What happens next?"

Michael reported from Cairo. Associated Press writers Pauline Jelinek in Washington and Slobodan Lekic in Brussels contributed to this report.