McCain was for Gadhafi before he was against him 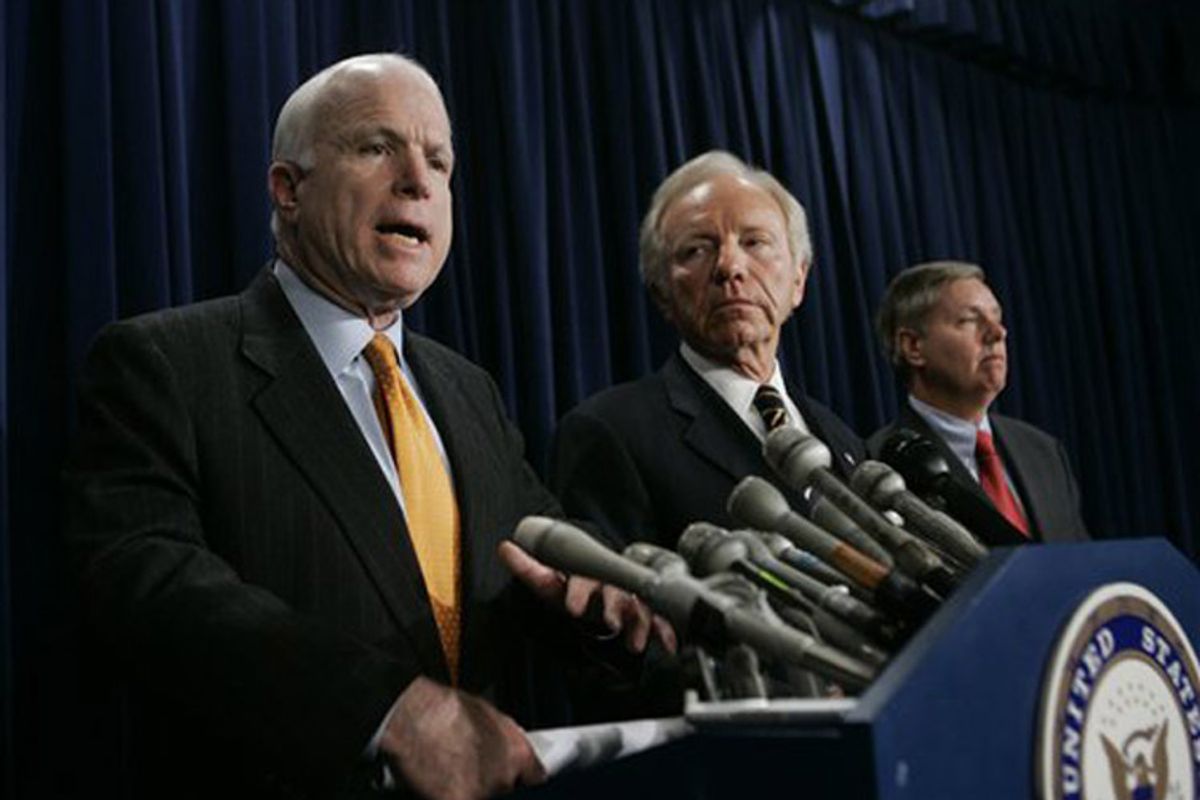 I noted earlier that Sen. John McCain has taken a strange position on the Libyan conflict: He's been calling for the ouster of Moammar Gadhafi not only on humanitarian grounds, but also because Gadhafi has "American blood on his hands" from the 1988 Lockerbie bombing. However, just 18 months ago, McCain himself traveled to Tripoli to talk to Gadhafi about a transfer of American military equipment. He also praised the "remarkable and positive turn" in U.S.-Libya relations.

It turns out one of the diplomatic cables released by WikiLeaks describes in detail the friendly meeting between McCain and Gadhafi. It was also attended by fellow hawks Joe Lieberman and Lindsey Graham as well as Gadhafi's son, Muatassim. (See video of the meeting here.)

Keep in mind the context for the meeting was several years of increasingly warm relations between the U.S. and Libya. In the private talks, Muatassim Gadhafi "emphasized Libya's interest in the purchase of U.S. lethal and non-lethal military equipment." McCain was receptive to that request:

Muatassim requested the "highest level of help possible" to obtain military supplies, including mobile hospitals and uniforms. He also requested assistance with upgrading Libya's equipment, including helicopters. "We can get [equipment] from Russia or China, but we want to get it from you as a symbol of faith from the United States," he said. He described the security threats that Libya could possibly face as a result of its geography - "There are 60 million Algerians to the West, 80 million Egyptians to the East, we have Europe in front of us, and we face Sub-Saharan Africa with its problems to the South." ...

Senator McCain assured Muatassim that the United States wanted to provide Libya with the equipment it needs for its TRIPOLI 00000677 002.2 OF 002 security. He stated that he understood Libya's requests regarding the rehabilitation of its eight C130s (ref D) and pledged to see what he could do to move things forward in Congress. He encouraged Muatassim to keep in mind the long-term perspective of bilateral security engagement and to remember that small obstacles will emerge from time to time that can be overcome.

Bucky Turco at Animal New York points out that the Pentagon apparently has an expansive definition of "non-lethal equipment." The term encompasses items like shotguns, tear gas canisters and stun grenades.

McCain sent out this memorable tweet after his Gadhafi meeting:

There's nothing contradictory about previously advocating for normalization of relations with Gadhafi and then shifting, in the face of Gadhafi's attacks on rebels, to supporting a bombing campaign. That's not what McCain is doing. He is arguing that Ghadafi needs to be ousted because he has American blood on his hands (from 1988), when the senator himself was meeting with and praising the Libyan regime a mere 18 months ago.