How to explain the popularity of Pringles?

From the campgrounds of Botswana to the peaks of the Andes, they're the Michael Jackson of American exports 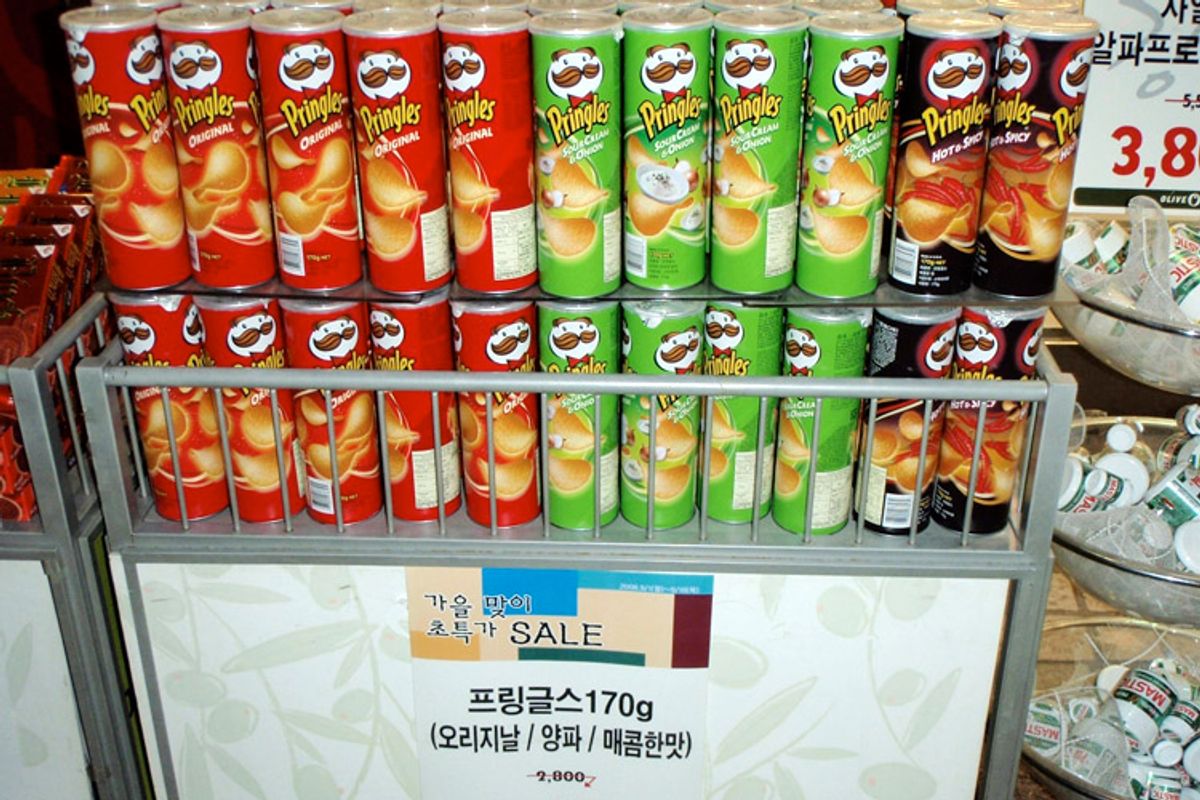 "This is supposed to be 'Ask the Pilot,'" begins one of my favorite recent complaint letters. "I love your columns on the intricacies and mysteries of air travel but have now lost patience with your wandering soliloquies on the injustice of the world's economic system or the bad vacations you've taken ... So please, do everyone a favor and stick to writing about what you know: air travel."

I'll point out that never, from Day One, has this column been exclusively about air travel, and plenty of people enjoy my diversions. But I hear you, man. Really I do. (I thought my bad vacation soliloquies were pretty entertaining, actually, but I guess I was wrong.) Just hang in there and soon I'll be back to airplanes and airlines. I'm planning a 5,000-word dissertation on the nose gear steering system of the 747, followed by a long interview with ICAO's third vice president for the standardization of runway markings.

But before that, I need to talk about something very, very important: potato chips.

I once mused that America's most ubiquitous cultural export was a tossup between the milk crate and the baseball cap. Pringles, I think, are nudging their way to the top. If you're prone to traveling abroad and have any respectable powers of observation, you're already well aware of this: Pringles are a global sensation.

They are a bit like Michael Jackson -- long a diminished sensation here at home, but spectacularly, if inexplicably popular overseas, nearly as ubiquitous as Coca-Cola. According to maker Procter & Gamble, Pringles are marketed in at least a hundred countries and account for $1 billion in annual sales. You see them in airports, bus stations, on trains and ferries and planes (look closely on the left). And everywhere, from the campgrounds of Botswana to the peaks of the Andes, is that sound -- the telltale suck-and-pop of European teenagers peeling open their canisters of Sour Cream & Onion.

There are even Pringles knockoffs. Why?

Portability is the obvious reason. The way they are canned and stacked -- "their consistent saddle shape is mathematically known as a hyperbolic paraboloid," says Wikipedia -- makes them impervious to crushing and breaking. Better than munching on crumbs, I guess, even if they taste like lightly salted notebook paper. (I know that many people enjoy them, but Pringles are like too many things American: bland and overprocessed.)

But portability alone can't explain their popularity. It's not just backpackers and those on the go who indulge. I see pyramids of Pringles in regular old kiosks and stores all over the world. The picture at the top of this column was taken on a downtown sidewalk in Seoul, Korea. The shop owner came out screaming when she saw me aiming my camera, leading me to think there's some conspiracy afoot.

They are, after all, manufactured by Procter & Gamble, a company whose former logo -- an occult-looking engraving of a moon-man overlooking a field of 13 stars -- was seen by some as an emblem of demonic symbology.

To help get to the bottom of things, I have started a Pringles photo group on Flickr.com. Readers are invited to submit your own pictures of these starchy parabolas in whatever exotic locations you happen to find them. Together, perhaps, we can solve the mystery of this most pervasive and non-delectable phenomenon.

And while we're at it, let's get a list going of other peculiar American exports encountered by travelers abroad.