The ads have a class-war message, the food is suspiciously tasty, and the staff is judgmental. What a border run! 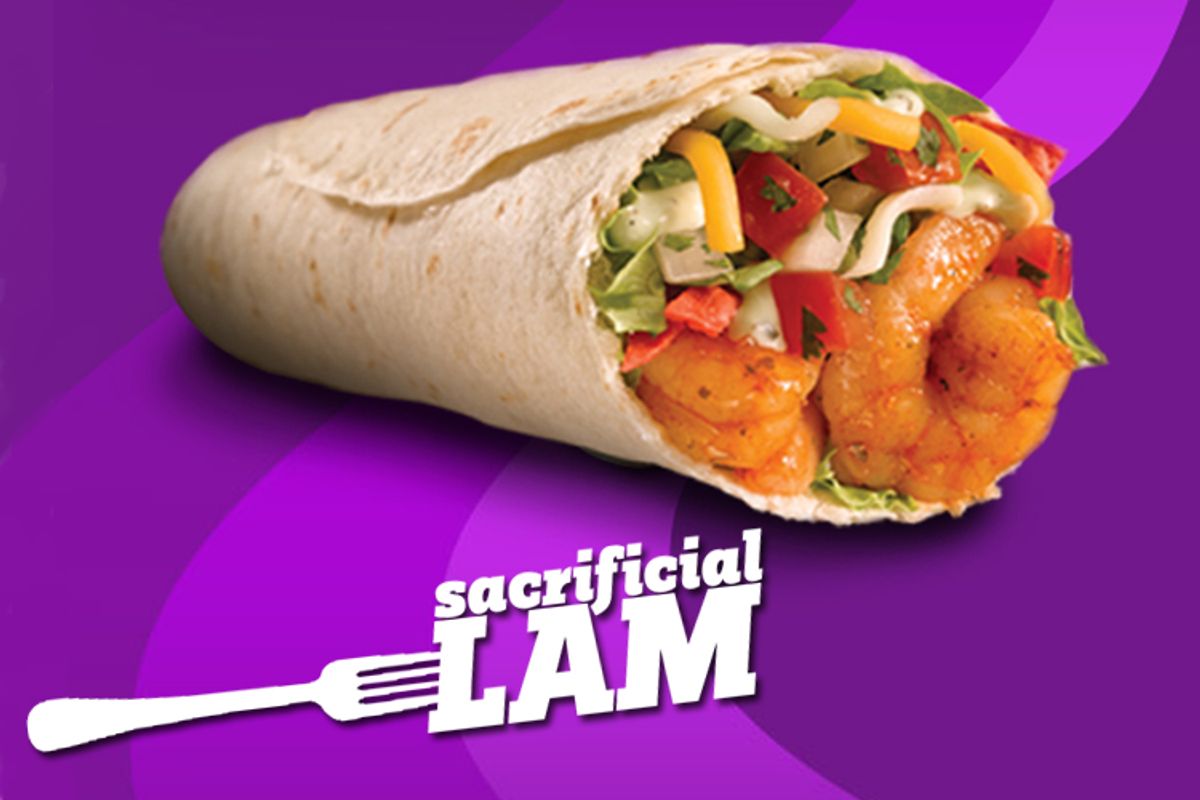 This is a phrase you don't ever hear, but: I just read the most amazing press release. It's from Taco Bell, it's touting its new Pacific Shrimp Burritos, and it starts like this:

That's right, people! Ditch the tails and top hat you throw on every time you have a desire for ... the most commonly eaten seafood in America. (Er, it turns out Americans have eaten more shrimp than canned tuna since 2001. But that's because WE ARE ALL MILLIONAIRES ALL THE TIME YEAH!) Maybe I'm taking this sales pitch too literally! Let's keep reading:

It's no longer just about who you know - but knowing where to go. Starting this week, everyday foodies craving succulent shrimp can look past the nearest yacht party or invite-only gala, and turn to Taco Bell® for its Pacific Shrimp Taco and NEW Pacific Shrimp Burrito. Filled with tasty ingredients and shrimp marinated with chipotle seasonings, the limited-time menu items will satisfy mouth-watering hunger for shrimp - all while offering red-carpet taste for less green.

Infiltrate yacht parties! Steal from invite-only galas! Forget shellfish, it's subversive class warfare! Sadly, though, all this creative revolutionary fervor dies down under the crushing weight of still being a corporate press release, and so it continues for another 250 words, including choice selections like, "flavorful, premium protein option," and "tumbled in a 'waterfall' of chipotle marinade." At some point, it refers to an ingredient called, seriously, "red strips." Presumably they are not made to deliver that "red-carpet taste," but who can say what magic food scientists have conjured?

But, hey, since it's Lent, which for non-Catholics is also known as "Fast Food Seafood Season," I'll bite. (Fun fact: McDonald's Filet-o-Fish, and possibly every other fast food seafood item, was invented to keep Catholics coming to burger joints during Lent.)

Remember the old Taco Bell slogan "Run for the Border"? Well, if you're in midtown Manhattan, the border is the basement of Penn Station, and while I appreciate commuter rail, it's hardly the first place you want to look for lunch. But there I was, grabbing my to-stay burrito and taco from a counter that doubled as a KFC.

Not to be all enviro-weenie, but why do they bother to ask if it's to stay or to go and still hand it to you in a plastic bag either way? I went to a table, empty but for alarming, dried-on streaks of barbecue sauce, and on the way passed by a woman struggling to free her taco from its plastic sack. She finally got it out, tugging, exploding the wrapper and showering the floor with a confetti of lettuce and cheese. It was, for a split second, captivating, the green and orange shreds sailing in air. It was like a scene deleted from "American Beauty."

I went for the burrito first, and that familiar kinda-sticky, kinda-tangy-smelling, kinda stretchy tortilla gave way to cold lettuce and salty cheese, which I couldn't now help but imagine falling onto the floor, over and over again. There came a crunch -- shreds of tortilla chips, dyed red (Ah! The "red strips"!). And then there was the shrimp, coiled and about an inch in diameter, pleasantly chewy, and which, to be honest, tasted pretty good. I mean, the "waterfall of chipotle marinade" meant that it was going to taste mainly of vague spices, chile and "natural smoke flavoring," but under that, there was an actual flavor of shrimp. In particular, the iodine-y tang you often find in Gulf shrimp. (Though I am under no illusions these are American wild-caught Gulf shrimp.)

It's a flavor not everyone loves, but I have to admit I was pleasantly surprised to find any shrimp flavor at all in these guys. Usually shrimp this size are too immature to develop much real taste or texture. And while the size-obsessed may gripe over their puniness, a few bites that included all the various ingredients really kind of convinced me of their size-appropriateness; they're part of the harmony of the burrito mélange. (Yes, I just said that.) A mélange in which, it turns out, the red strips are the crunchy star, like a pile of tortilla-wrapped nachos, doused in green-tinted mayo. (It's "avocado ranch," apparently. The world has so many lessons to learn from ranch.)

Next, I went for the taco, which was basically the same thing, minus cheese and red strips (sad!) and plus "salsa." As I tasted this "salsa," I thought, "Whoa, cucumber! Turns out cucumber and cilantro are delicious together!" And then I realized there was no cucumber in it, but rather just very wan tomatoes. I filed away the cucumber-and-cilantro idea for my own personal use.

Still, this is all supposed to be about the shrimp, and I got to wondering how they could find small shrimp with so much flavor. I checked Taco Bell's ingredients list, and, sure enough: "chicken broth" and "natural flavor." One means that they're not quite the purely pescatarian delight you may have been hoping for; the other means "better living through chemistry."

As I prepared to leave, I went back to the counter, to get another shrimp taco to go for a curious friend. I still had the flimsy bag in my hand from my own order, so I handed it toward the woman behind the register, suggesting she just put the taco back in it. She used a look that would have been reserved, in prior centuries, for lepers and fingerless beggars. I persisted, saying something about "I can just re-use the bag." She was not amused. She used that look again, and I felt ... witheringly small. Like I'd been caught crashing a yacht party.