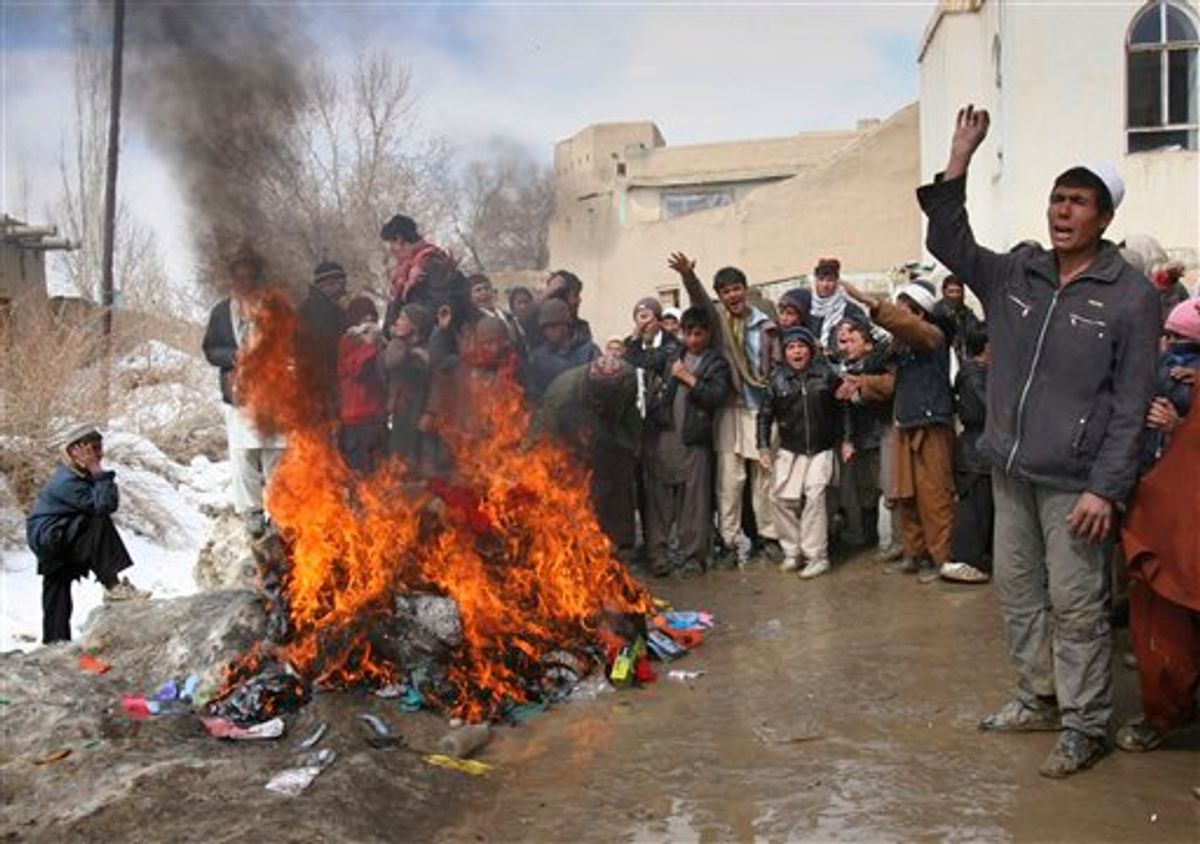 Afghans shout anti US slogans as they burning blankets, clothing and other items, which were distributed by coalition troops in Ghazni west of of Kabul, Afghanistan on Tuesday, March. 1, 2011. Residents in Ghazni burned blankets, clothing and other items that they said coalition troops had distributed in the city on Monday. (AP Photo/Rahmatullah Naikzad) (AP)
--

A 22-year-old soldier accused of carrying out a brutal plot to murder Afghan civilians faces a court-martial Wednesday in a case that involves some of the most serious criminal allegations to arise from the U.S. war in Afghanistan.

Spc. Jeremy Morlock, of Wasilla, Alaska, has agreed to plead guilty to three counts of murder, one count of conspiracy to commit assault and battery, and one count of illegal drug use in exchange for a maximum sentence of 24 years, said Geoffrey Nathan, one of his lawyers.

His client is one of five soldiers from Joint Base Lewis-McChord's 5th Stryker Brigade charged in the killings of three unarmed Afghan men in Kandahar province in January, February and May 2010. Morlock is the first of the five men to be court-martialed -- which Nathan characterized as an advantage.

"The first up gets the best deal," he said by phone Tuesday, noting that even under the maximum sentence, Morlock would serve no more than eight years before becoming eligible for parole.

According to a copy of the plea agreement, which was obtained by The Associated Press, Morlock has agreed to testify against his co-defendants. In his plea deal, Morlock said he and others slaughtered the three civilians knowing that they were unarmed and posed no legitimate threat.

He also described taking a lead role in the January incident -- lobbing a grenade at the civilian while another soldier shot at him, and then lying about it to his squad leader.

The court-martial comes days after a German news organization, Der Spiegel, published three graphic photos showing Morlock and other soldiers posing with dead Afghans. One image features Morlock grinning as he lifts the head of a corpse by its hair.

Army officials had sought to strictly limit access to the photographs due to their sensitive nature. A spokesman for the magazine declined to say how it had obtained the pictures, citing the need to protect its sources.

Morlock told investigators the murder plot was led by Staff Sgt. Calvin Gibbs, of Billings, Mont., who is also charged in the case; Gibbs maintains the reasons behind the killings were legitimate.

Nathan said Morlock's mother, hockey coach and pastor are among the witnesses who might testify on his behalf in court. He indicated the defense would argue that a lack of leadership in the unit contributed to the killings.

"He's really a good kid. This is just a bad war at a bad time in our country's history," Nathan said. "There was a lack of supervision, a lack of command control, the environment was terrible. In his mind, he had no choice."

After the January killing, platoon member Spc. Adam Winfield, of Cape Coral, Fla., sent Facebook messages to his parents saying that his fellow soldiers had murdered a civilian and were planning to kill more. Winfield said his colleagues warned him not to tell anyone.

Winfield's father alerted a staff sergeant at Lewis-McChord, which is south of Seattle, but no action was taken until May, when a witness in a drug investigation in the unit also reported the deaths.

Winfield is accused of participating in the final murder. He admitted in a videotaped interview that he took part and said he feared the others might kill him if he didn't.

Seven other soldiers in the platoon are charged with lesser crimes, including assaulting the witness in the drug investigation, drug use, firing on unarmed farmers and stabbing a corpse.