US treads fine line as ally in Yemen could fall

While intervention continues in Libya, the administration keeps a cautious posture toward unrest in Yemen 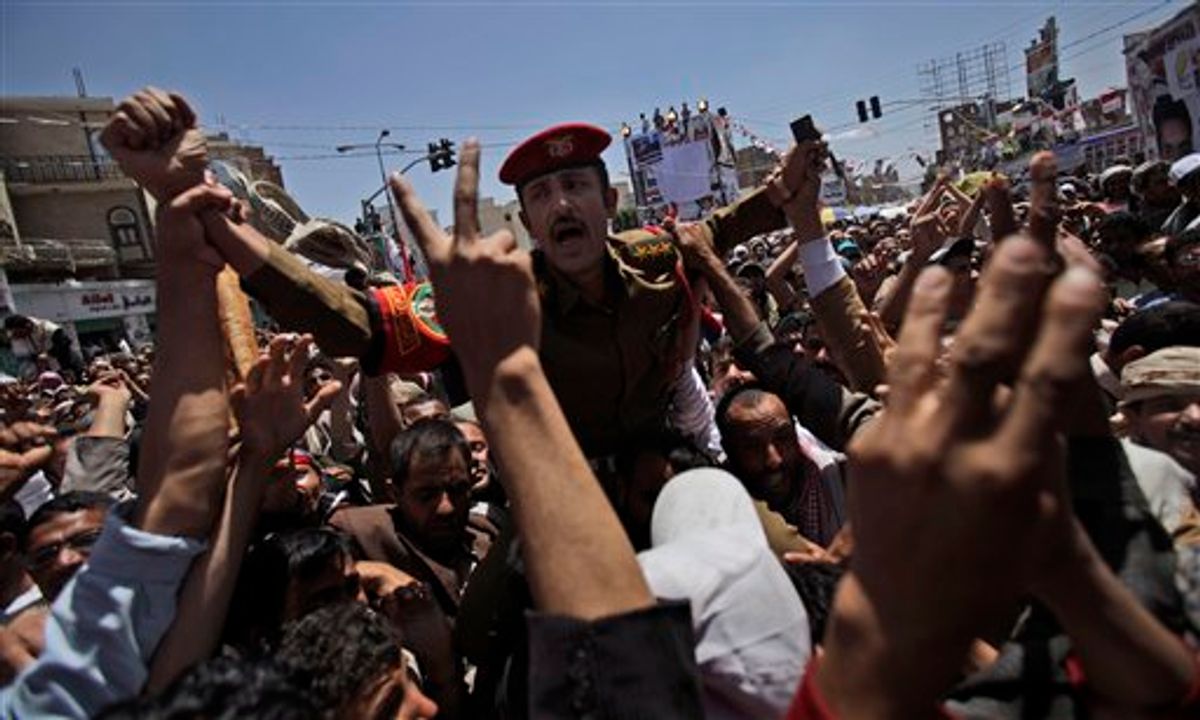 The Obama administration sought Wednesday to avoid undermining an embattled ally in Yemeni President Ali Abdullah Saleh, offering no prediction as to whether he could ride out spirited street protests to remain in power and refusing to acknowledge any contingency plans in case he is ousted.

The caution from top officials such as Defense Secretary Robert Gates and Secretary of State Hillary Rodham Clinton represented a careful balancing act for the administration. The U.S. doesn't want to add pressure on Saleh, who has proven himself a key partner in the fight against al-Qaida, even as American officials have become increasingly perturbed by the harshness of his government's crackdown on peaceful protesters.

In Cairo for meetings, Gates said that while things are unsettled in Yemen it was too early to know the outcome. He stressed that the U.S. had a good relationship with Saleh, whose offer to step down at year-end after more than three decades in power has been rejected by the opposition. And, Gates said, the administration hadn't formulated an approach to the country for when the aged president leaves office.

That message was echoed in Washington by Clinton, however unlikely it seemed that the U.S. government had conducted no planning for how it might react to Saleh's departure from Yemen, a main counterterrorism battleground.

"We're not going to make predictions about what will happen in Yemen," Clinton said after meeting Morocco's foreign minister. "We support dialogue as a path to a peaceful solution to Yemen's current political situation that includes genuine participation by all sides."

That dialogue has yet to begin in the Arabian country, and the crisis intensified on Wednesday as Yemen's parliament granted Saleh's request for sweeping emergency laws that include new powers of arrest, detention and censorship to quash the popular uprising demanding his ouster. The move escalated the showdown between Saleh and a movement that now includes top military commanders, religious leaders and protesting youth.

The rival factions of the military have deployed tanks in the capital, Sanaa. In the most brutal show of force on anti-government demonstrators, security forces shot dead more than 40 protesters on Friday.

The violence and instability are causing unease in Washington. For two years, the Obama administration had a relationship of convenience with Yemen, keeping its government armed and flush with cash in return for assistance against al-Qaida. And after seeing long-time allies in Tunisia and Egypt chased from power in popular revolts, the U.S. has sought to cajole Saleh into promising the types of reforms that might appease frustrated youths and others in the Arab world's most impoverished country, while maintaining stability and continuity in the fight against Islamic extremists.

Asked if the administration had a strategy in place in case Saleh was ousted, State Department spokesman Mark Toner was careful not to contradict his superiors. But he stressed that "our interests in Yemen go beyond specific individuals."

"We along with the people and the government of Yemen have a strong interest in combatting terrorism," Toner told reporters. U.S.-Yemen relations "go beyond one individual; they are government-to-government."

The Obama administration considers the al-Qaida in the Arabian Peninsula offshoot to be the most serious terror threat to the United States. The group nearly succeeded in bombing U.S. cargo jets last fall and a passenger airliner on Christmas 2009.