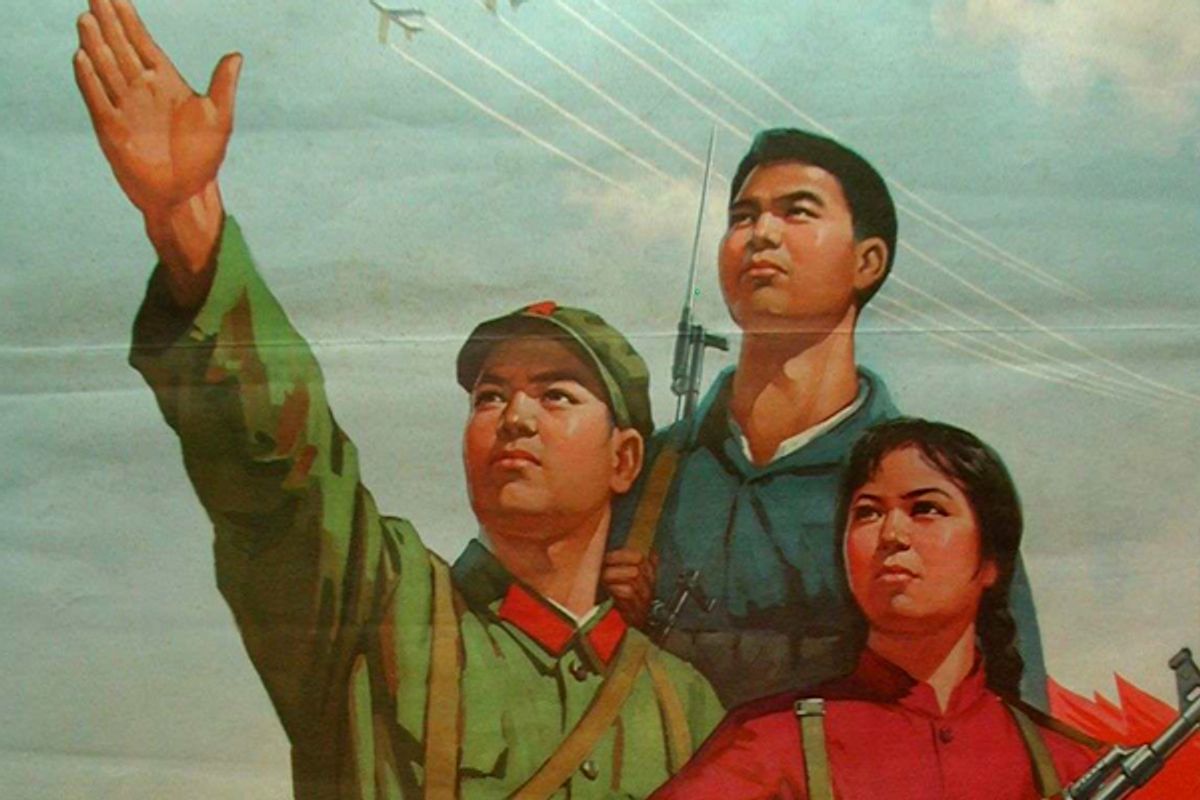 A PLA soldier instructing the citizen militia to defend against nuclear, chemical and biological attack.
--

To paraphrase (and vastly abbreviate) Arlo Guthrie's "Alice Restaurant," if just one prominent Republican politician calls the national debt a new "Red Menace" we can just dismiss him as crazy and go on about our normal business. But if two GOP rising stars do it, then it's a movement and we'd better pay serious attention. Because before you know it, the House Un-American Activities Committee will be accusing every card-holding-Keynesian advocate of fiscal stimulus of committing foul treason, and that could get messy.

On February 11, Indiana Governor Mitch Daniels told an audience at the Conservative Political Action Conference that the growing national debt was as serious as the Cold War. "It is the new Red Menace, this time consisting of [red] ink," he said.

On March 24, reports The Hill, House Republican Conference Chairman Jeb Hensarling picked up the theme, but added an extra special Commie-baiting twist by bringing China directly into the conversation.

"The red menace for the 21st century is our public debt."

Keeping with his communism theme, Hensarling implied that interest payments the U.S. is making to China alone could pose a national security threat.

"The interest we pay to China on our debt, they can essentially afford to buy a [Joint] Strike Fighter every other day," he said, according to the Daily Progress. "Our greatest competitor in the world ... we are building their armed forces with the interest we pay them on the national debt."

Gosh, if I was a Chinese Politburo member, that kind of rhetoric would probably have me doubling-down on my military expansion plans, because everyone knows all too well what happened to the last aspiring evil empire that conservative Americans feared as the "Red Menace." But to bring it all back home, it seems tombe that the Hensarling and Daniels have painted their party into a corner. Because if debt is the greatest threat to freedom, and China is leveraging itself up into superpower status on the back of American profligacy, then it should be every red-blooded American's patriotic duty to bring down deficits as fast as possible. And I will further submit that the most sensible way to do that would be to cut a longterm budget deal that matches spending cuts with revenue increases.

I just think that if the richest Americans were asked nicely to pay a little more in taxes, because it would help us defeat the Red Menace, there'd really be no decent way for them to say no.